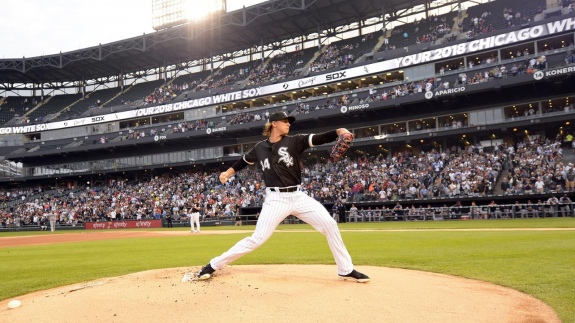 Michael Kopech made his rain-shortened major-league debut on August 21 against the Minnesota Twins.

Tonight, the White Sox will answer with their 22-year-old phenom, Michael Kopech (1-0, 1.13 ERA). Kopech made his major-league debut on August 21 against the Minnesota Twins (62-71, .466). During that start he allowed three hits and fanned four Twins in two innings, but a rain delay ended his evening early. He lasted six innings against the Detroit Tigers (54-80, .403) on August 26 and allowed one earned run and fanning four.

Fun Fact #1: The last time I watched the Red Sox play live was on September 25, 2011, at Yankee Stadium. We were in attendance for the first game of a doubleheader against the Yankees. Yankees catcher Jorge Posada was 2-for-3 with a home run and two runs batted in.

Fun Fact #2: More than 30 years have passed since I've seen the Red Sox and White Sox play each other. On July 8, 1988, I was in attendance as the teams split a doubleheader at old Comiskey Park. The White Sox won the first game, 6-5. White Sox designated hitter Harold Baines was 3-for-4 with three runs batted in. The Red Sox won the second game 10-7. Red Sox center fielder Ellis Burks was 2-for-4 with two home runs and four runs batted in.