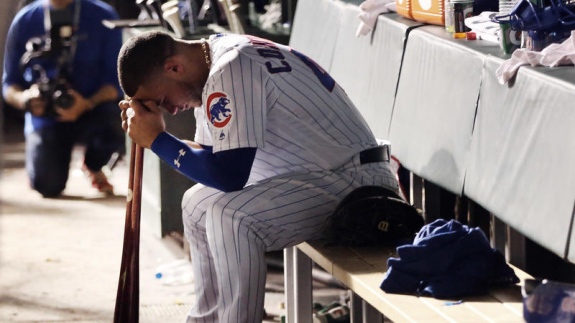 With runners on second and third and no outs, Nolan Arenado hit a sacrifice fly to deep right-center field that sent Charlie Blackmon home. The Rockies survived a two-out Cubs rally in the bottom of the seventh inning when the North Siders loaded the bases, but pinch-hitter Jason Heyward struck out. Until the bottom of the eighth inning, the Rockies mustered all of the offense they needed.

After Cubs first baseman Anthony Rizzo hit a two-out single in the bottom of the eighth, pinch-running specialist Terrance Gore entered the game. He promptly swiped second base. NL MVP candidate, Javier Baez, doubled to center field and plated Gore. The Cubs knotted the score at 1-1. The 2016 Cubs had a knack for capitalizing on moments like this. But this year's team had a season-long problem.

During the 2018 regular season, the Cubs scored one or fewer runs in 39 games. That equates to approximately one-quarter of their games (23.93% in 163 games). Only the Baltimore Orioles, the worst team in baseball with 115 losses, had more. The Orioles accomplished that feat in 40 games. For what it's worth, the Rockies were only limited to one or fewer runs during 14 regular season contests (8.59% in 163 games).

Following the Cubs' truncated postseason run, fans may find solace in numbers generated during Maddon's era at the helm. After joining the franchise in 2015, the Cubs reached the National League Championship Series (NLCS) in three consecutive seasons (2015-2017). Of course, 2016 ended the legendary 108-year title drought by defeating the Cleveland Indians in the Fall Classic. The Maddon-led Cubs have amassed 387 regular season wins (.597). That is eight more than the Dodgers and a baker's dozen more than the Houston Astros.