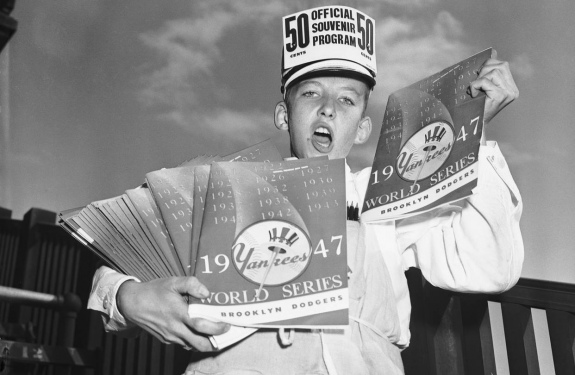 A kid sells programs for the 1947 World Series, only the second time the Brooklyn Dodgers and New York Yankees battled for baseball greatness.

Tonight, the New York Yankees (100-62, .617) are fighting for their playoff lives against their legendary rivals, the Boston Red Sox (108-54, .667). Trailing two-games-to-one in the best-of-five American League Division Series (ALDS), the Yankees asked Bucky Dent to throw out the first pitch prior to this evening's Game Four at Yankee Stadium. All but one of the potential World Series rematches will be wiped away if the Red Sox eliminate the Bronx Bombers. But hold that thought.

As mentioned earlier, a Red Sox win this evening will drastically reduce the amount of potential World Series rematches. Prior to the NL Wild Card Game, when all 10 teams were alive, 27 different rematches were possible. At the time of posting, the Red Sox were holding a 4-1 lead in the top of the seventh inning.

Assuming a Yankees rally remains possible, there are 12 rematches still on the table. Of course, all but one of them include the Dodgers (from Brooklyn and Los Angeles) battling the Yankees. Here are the two LCS matchups:

Here are the World Series matchups we've seen before: