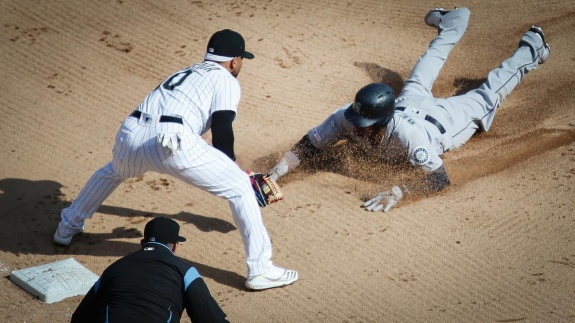 This afternoon, the Chicago White Sox (3-4, .429) will close out the team's first home series of the 2019 season. Due to inclement weather, the White Sox moved Thursday's home opener against the Seattle Mariners (8-2, .800) to Friday. The White Sox won the opener, 10-8, then the Mariners hammered the Sox on Saturday, 9-2.

The Mariners, who opened the season early with two games against the Oakland Athletics in Japan's Tokyo Dome (and said goodbye to team legend Ichiro Suzuki), have been red hot. Seattle swept the two games in Japan, then won three of four against the defending World Series champion Boston Red Sox, and then swept a second 2-game series against the Los Angeles Angels.

Today, the Mariners will send 34-year-old Wade LeBlanc (1-0, 6.75 ERA) to the mound. During his lone appearance this season, he lasted 5 1/3 innings against the Red Sox. LeBlanc surrendered four earned runs (six total), but Seattle's offense provided enough firepower to give him the win.

Ivan Nova (0-0, 1.29 ERA), will answer for the White Sox. The 32-year-old righty pitched seven innings against the Cleveland Indians. He allowed one run, but the bullpen lost the lead costing Nova the win.