Following their Opening Day loss, the Chicago Cubs steeled themselves and won the next two games against the Pittsburgh Pirates. Then they welcomed the St. Louis Cardinals to Wrigley Field, waited out the rain and continued their winning ways by taking the series opener. Chicago's National League franchise sat in a virtual tie for second place. The undefeated Boston Braves (3-0) held the top spot. Both the New York Giants (2-0) and Cubs (3-1) trailed by half a game.

After Sunday's 4-0 win over the Cardinals, the two teams sent pitchers at opposite ends of the age spectrum to the mound on Monday, April 22. St. Louis sent 42-year-old and former Cubs, Pete Alexander against 26-year-old Pat Malone. Both men answered the call and pitched complete games. Malone scattered five hits and only allowed one Cardinal to reach second base. Alexander lost the game when he surrendered a leadoff home run to Rogers Hornsby in the bottom of the fourth. Kiki Cuyler's bunt single in the fifth scored Clyde Beck. Charlie Grimm scored the final run on a Mike Gonzalez single in the sixth. The Cubs defeated the Cardinals, 3-0, and extended their winning streak to four games.

On Tuesday, April 23, St. Louis' Bill Sherdel pitched a 15-hit complete game that snapped the Cubs winning ways. Sheriff Blake surrendered seven runs on 11 hits over 7 1/3 innings. Despite seizing an early 1-0 lead, the Cubs surrendered three runs in the top of the third. Taylor Douthit and Frankie Frisch both doubled and drove in one and two runs respectively. St. Louis blew the doors open in the top of the eighth. With the score 4-2 in favor of St. Louis, the Cardinals sent five men across the plate. Chick Hafey had an RBI double and Ernie Orsatti had an RBI triple. Charlie Gelbert, Sherdel and Douthit all contributed run-scoring singles. The Cubs' eighth- and ninth-inning rallies tightened the score, but proved too little too late. Despite late runs batted in by Tom Angley, Woody English and Grimm, the Cardinals beat the Cubs, 9-6. 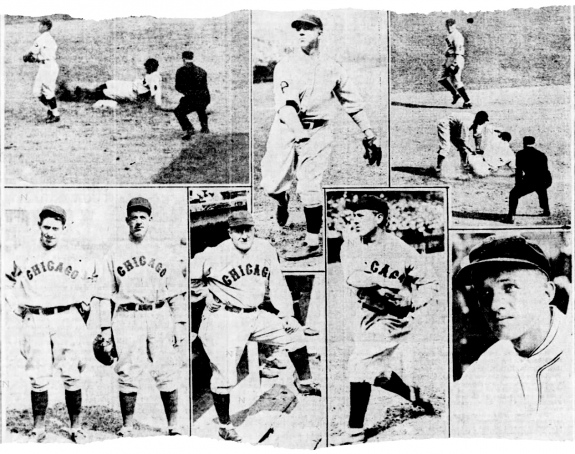 
With a 4-2 record, the Cubs ended their first homestand of the season and departed for Pittsburgh's Forbes Field. The Pirates, with revenge on their minds, pounced on Charlie Root again. Root surrendered four runs in the home half of the third inning. Paul Waner and Pie Traynor each notched RBI singles then Earl Sheely singled home of his own.

The Cubs whittled away at Pirates hurler Burleigh Grimes and ultimately tied the score, 4-4, during the eighth inning following an Angley RBI single. Neither starting pitcher earned a decision, but each allowed four runs. Cubs manager Joe McCarthy yanked Root after six innings. The Pirates manager Donie Bush allowed Grimes to pitch 11 innings. The 13th inning proved unlucky for Chicago's Trader Horne as he surrendered a game-winning single to Sheely. Traynor crossed the plate to give the Pirates a 5-4 victory.

Mother Nature interfered on Thursday, April 25 and pummeled Forbes Field with rain. With the game washed away, team officials agreed and plan to reschedule the meeting as the second game of a doubleheader on Wednesday, August 28.

On Friday, the Cubs and Pirates kept within the regulation nine, but they answered each other with big innings. Pittsburgh jumped on Chicago's starting pitcher Guy Bush in the bottom of the second. The Pirates scored three in the frame, but the Cubs responded with five in the top of the third. English singled home Johnny Schulte, Cuyler walked sending Bush across the plate, and then Hornsby tripled with the bases loaded to drive home three. With that five-spot, the Cubs sent Pirates starter Ray Kremer to the showers in favor of Erv Brame.

Chicago added insurance runs extending their lead to 9-3 with runs in the fifth and sixth innings. With Lloyd and Paul Waner on second and first respectively, George Grantham connected off of Bush and clubbed a three-run homer to trim the deficit. Bush escaped the eighth inning and faced only Bob Linton in the ninth. After Linton walked, McCarthy signaled for reliever Mike Cvengros. Cvengros threw a wild pitch, walked Adam Comorosky, he induced a double play and then a groundout to secure a Cubs 9-6 win.

Saturday, April 27 brought another high-scoring affair. Malone, who pitched efficiently during his last start against the Cardinals, lasted eight innings and allowed seven runs on 13 hits to the Pirates. Steve Swetonic, Malone's pitching counterpart, matched his stats in nearly half the innings. Chicago held an 8-4 lead until the home half of the ninth.

With Malone still on the mound, he surrendered a single to Paul Waner then Traynor reached on an error by Hornsby. Grantham doubled and scored Waner. McCarthy handed the ball to Blake, but Sheely doubled immediately pulling the Pirates within one run. Blake locked down the 8-7 win by retiring Dick Bartell, Brame and Linton.

On April 28, the Chicago Cubs and Cincinnati Reds had their best offensive games of the young season at Redland Field.

The Cubs marched into Cincinnati's Redland Field on Sunday, April 28 and instantly fell behind 12-2 after just three innings. Chicago's Hal Carlson faced 15 Reds in just two-plus innings before hitting the bench. Cincinnati scored five in the bottom of the first and added one more before McCarthy called for Horne. Horne fared no better as he allowed five runners to cross home in just 2/3 of an inning.

During the top of the fifth, the Cubs rallied back to trim Cincinnati's lead to 12-11. Hack Wilson clubbed a two-run home run off of starter Ray Kolp. Cliff Heathcote added an RBI single, English walked with the bases loaded, Beck and Cuyler each added RBI singles, and then Wilson plated two more with a single to right field. The Cubs knocked in eight runs off of Kolp, Dutch Kemner and Eppa Rixey.

Both teams scored once in the eighth inning. Cubs outfielder, Wilson, belted his second home run of the game. Cincinnati's Walker doubled home Hughie Critz to secure the Reds' 17-12 victory. 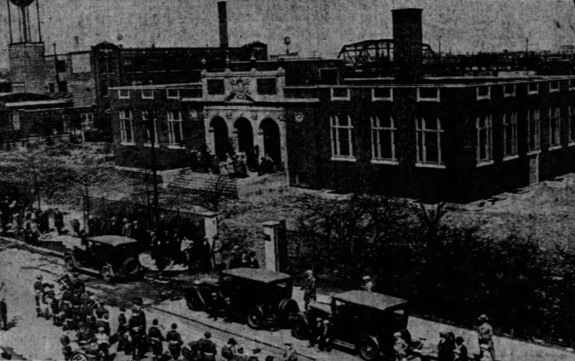