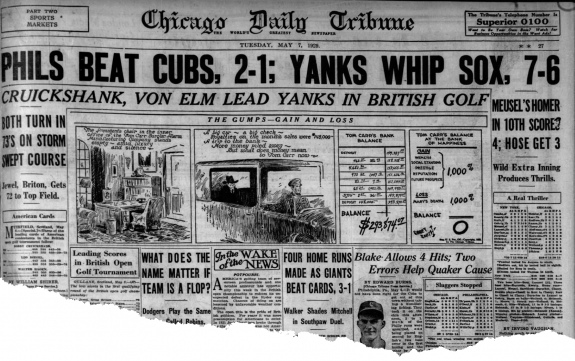 The Chicago Cubs could not complete the three-game sweep over the Philadelphia Phillies at the Baker Bowl.

After enjoying Sunday off, the Chicago Cubs and Philadelphia Phillies concluded their three-game series at the Baker Bowl. Chicago won the first two games of the series and had aspirations of completing the sweep.

On Monday, May 6, Chicago's Sheriff Blake and Philadelphia's Claude Willoughby both pitched complete games. Both pitchers surrendered one early run. In the bottom of the first, Lefty O'Doul gave the Phillies a 1-0 lead when he singled and Fresco Thompson scored from second. Chicago's Earl Grace did the same. With Riggs Stephenson on second, Grace singled and tied the score. Blake and Willoughby matched zero for zero until the ninth inning. Pinky Whitney stood at bat with one out in the home half of the frame. Whitney slapped a ground ball through the hole between short and third which brought O'Doul home and secured a 2-1 Phillies win.

The following afternoon, the Cubs arrived at Brooklyn's Ebbets Field. Keep in mind that was the period when Brooklyn's National League franchise was not known as the Dodgers, rather, the Robins in honor of their manager Wilbert Robinson.

That afternoon, Cubs starting pitcher Art Nehf pitched a nine-hit complete game. He was aided by Chicago's offense that provided an 8-0 lead that stretched into the bottom of the seventh inning. Clyde Beck walked with the bases loaded in the second, Charlie Grimm slugged a two-run homer in the fourth, Stephenson and Grace each knocked in runs during the fifth. Stephenson brought heavy lumber in the sixth and belted a three-run blast.

Nehf encountered trouble in the home half of the seventh and eighth inning. Harvey Hendrick and Val Picinich doubled and singled respectively to plate two runs. Then Babe Herman and Hendrick each knocked in a run. Grimm added a hint of insurance when he added a solo home run in the top of the ninth. Chicago closed out the bottom of the inning and won, 9-4.

Looking to take two in a row over the Robins, Chicago fell behind 2-0 early. After early trouble, Cubs pitcher Guy Bush settled down and finished the game. Rogers Hornsby cut into Brooklyn's lead during the fourth inning when he singled and drove home Kiki Cuyler making the score 2-1 in favor of Brooklyn. In the top of the sixth inning, Chicago answered and regained the lead. With one out and runners on first and second, Hack Wilson singled off of Doug McWeeny and plated Beck and Cuyler. Grimm grounded into an inning-ending double play, but before Wilson scored before the final out was recorded. Bush sailed smoothly the remainder of the game giving Chicago a 4-2 victory over the Robins.

Earlier in the week, Chicago failed to complete the three-game sweep of the Phillies, but the Cubs offense made certain of victory on Thursday. The North Siders generated all of the offense they would need to complete in the top of the first inning, but they did not stop there. In addition, Pat Malone pitched another complete game.

Chicago stretched an 11-0 lead into the bottom of the ninth before Brooklyn scored a run. With one out and Hendrick on first base, Jake Flowers hit a two-run home run into left field. Malone composed himself and locked down the sweep by beating the Robins, 11-2.

The Cubs traveled to New York's Polo Grounds for a weekend battle against John McGraw's Giants. On Friday afternoon, Chicago matched its output from Thursday in Brooklyn. Chicago's streak of complete games came to a halt when Charlie Root was pulled after 5 2/3 innings. Trailing 3-0 going into the bottom of the fifth inning, the Giants evened the score. Travis Jackson singled to score Mel Ott, Edd Roush doubled to score Bill Terry and then Pat Crawford's sacrifice fly plated Jackson.

Chicago locked up the win by answering with five runs in the top of the sixth inning. Stephenson tripled to score Wilson, Grace singled to score Stephenson and then Root took matters into his own hands and belted a three-run homer. New York answered with one in the bottom of the frame, but Chicago added one in the seventh and two in the eighth to guarantee an 11-4 win over the Giants.

On Saturday, the Cubs offense went dormant, but the game wasn't out of hand until the eighth inning. In the bottom of the first inning, Chicago's Blake threw a wild pitch that allowed Jimmy Welsh to score. Terry singled to right and sent Andy Cohen home for a 2-0 lead. That score held until Cubs reliever Hal Carlson surrendered a one-out grand slam to Terry in the eighth inning. On the long ball, Welsh, Freddie Lindstrom and Ott crossed the plate. New York won, 6-0.

To close out the series on Sunday, both teams brought their hitting sticks. With the score tied 6-6 after nine innings, the teams needed extras to resolve the battle. After 11 innings, the game was called a tie. While no play-by-play records exist for this game, we know that Gabby Harnett, Cuyler and Wilson each homered for the Cubs. Lindstrom and Ott did for the Giants. Following the game, the Cubs departed for Boston and a matchup with the Braves starting on Monday.