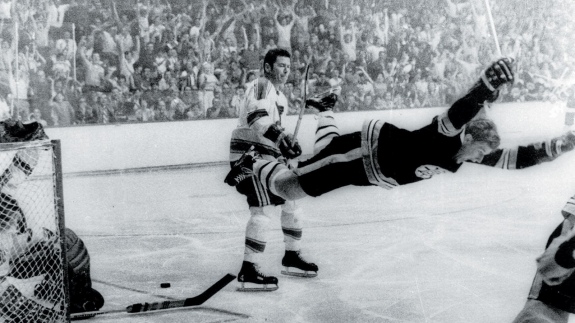 This evening, the puck will drop and Game One of the 2019 Stanley Cup Final between the Boston Bruins and St. Louis Blues will commence. The Bruins, one the NHL's Original Six, have won six Stanley Cup titles since the team was founded in 1924. The Blues, founded in 1967, are still in pursuit of their first championship. St. Louis has reached the Stanley Cup Final on four occasions (1968, 1969, 1970 and 2019). In fact, these two opponents faced each other during 1970's biggest stage and it ended with Bobby Orr immortalized in one of hockey's most iconic photographs.

While Boston and St. Louis ready themselves for tonight's game, it's time to take a look at the World Series history the two cities share. Until the 1950s, Boston and St. Louis were both two-team cities. The Red Sox have called Boston home since the founding of the American League in 1901, but the National League's Braves played there too before departing for greener pastures in Milwaukee in 1953 and ultimately Atlanta. The Cardinals have called St. Louis home since the team's days in the old American Association in 1882 (then known as the Brown Stockings). Until they packed up and rebranded as the Baltimore Orioles in 1954, the St. Louis Browns were better known as the team that sent Eddie Gaedel to bat.

Since Boston and St. Louis are two cities with such rich baseball histories, it's interesting that their baseball teams have only met in the World Series four times. Neither the Braves nor Browns battled an opponent from the opposite city during a Fall Classic. But, the Red Sox and Cardinals have met each other four times (1946, 1967, 2004 and 2013). Each team emerged victorious twice. The Red Sox and Braves never met during the World Series, but the Cardinals and Browns did in 1944.

Unlike the Super Bowl and its winner-take-all format, the NHL's Stanley Cup Final is a best-of-seven format allows for a more detailed look at the aforementioned World Series. Let's attack these in chronological order since we have the luxury of at least four games. 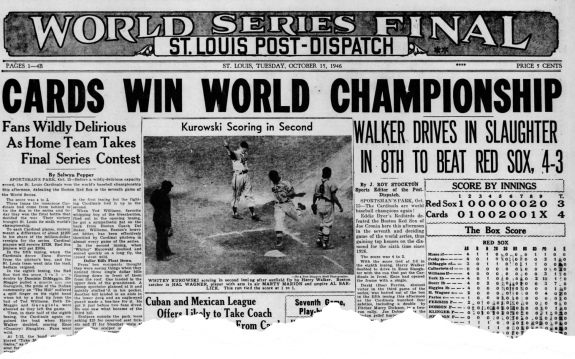 1946 World Series: St. Louis Cardinals defeat Boston Red Sox (4-3)
Boston Red Sox legend, Ted Williams, only reached the World Series once. That happened in 1946. Williams, known as The Kid or the Splendid Splinter, was the last player to finish a major-league season batting north of .400 (.406 in 1941). But when his Red Sox finally won the American League pennant, the Red Sox were able to render him ineffective. Williams finished the seven-game series batting 5-for-25 with one RBI (.200 AVG / .333 OBP / .200 SLG).

The Red Sox needed 10 innings to win Game One at St. Louis' Sportman's Park on Sunday, October 6. Howie Pollet, the Cardinals' starting pitcher, lasted all 10 innings. He held on to a 2-1 lead until the top of the ninth frame. With two outs in the top of the ninth, Tom McBride singled off of Pollet to drive home pinch runner, Don Gutteridge. Boston's first baseman, Rudy York, belted what would be the game-winning home run with two outs in the 10th inning. Red Sox reliever, Earl Johnson, closed out the game by retiring Terry Moore, Stan Musial and Enos Slaughter to win the opener, 3-2.

St. Louis evened the Series during Monday's Game Two at Sportsman's Park with a 3-0 win. Harry Brecheen pitched the Cardinals second consecutive complete game. He allowed four hits, fanned four and walked only three batters. In the bottom of the third, Brecheen singled off of Mickey Harris to score Del Rice. In the home half of the fifth, Moore singled to score Rice and then Musial grounded into a fielder's choice that scored Brecheen.

With the Series tied, 1-1, the venue shifted to Boston's Fenway Park for Game Three. The Red Sox grabbed an early 3-0 lead in the bottom of the first and never looked back. Game One star, York, hit a three-run homer off of Murry Dickson with two outs in the opening frame. Hal Wagner added an insurance run in the home half of the eighth when he reached first on an error by second baseman, Red Schoendienst. Boston's Dave Ferriss earned the win after pitching a complete game. Boston grabbed a 2-1 Series lead with the 4-0 Game Three win.

The Cardinals' offense exploded during Game Four by scoring 12 runs on 20 hits. The Red Sox, who made four errors, were never a factor in the game. St. Louis plated three runs in the second and three runs in the third. They added single tallies in the fifth and seventh innings, and then unloaded for four in the ninth. Catcher Joe Garagiola and shortstop Marty Marion both drove in four runs. Garagiola was 4-for-5 and Marion was 3-for-4. Enos Slaughter finished the day 4-for-6 and crossed the plate four times.

Entering Game Five on Friday, October 11, the World Series was tied at two games apiece. During the final Series game at Fenway Park, the Red Sox recovered from the 12-3 Thursday thumping. Boston's Joe Dobson pitched a complete game and earned the win. The Red Sox took a 6-1 lead into the ninth inning. Williams drove home his only postseason run during the bottom of the first. Despite finishing the day 1-for-5, his first-inning single knocked in Johnny Pesky. Harry Walker singled in the bottom of the ninth to score Musial and Whitey Kurowski. Boston hung on to win, 6-3.

The Red Sox needed one win in two attempts as the Series shifted back to Sportsman's Park. A win would end the team's 28 World Series title drought. Brecheen rose to the occasion in Game Six and pitched his second complete game of the World Series. Moore, Kurowski and Slaughter each knocked in run during the bottom of the third to give St. Louis a 3-0 lead. Bobby Doerr drove home Boston's lone run in the seventh inning. Marion's eighth-inning double extended the lead to 4-1. St. Louis forced a winner-take-all Game Seven. 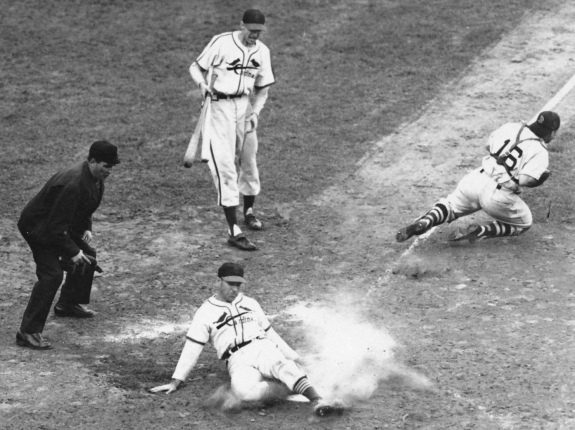 On Tuesday, October 15, the St. Louis Cardinals and Boston Red Sox were tied 3-3 in Game Seven after Boston scored two runs in the top of the eighth inning. That set the stage for one of baseball's most famous moments. St. Louis' right fielder, Enos Slaughter, singled off of Boston pitcher Bob Klinger. Klinger quickly retired Kurowski and Rice. With two outs, Harry Walker doubled to center field. Slaughter, who was on first base, charged around the bases and scored. That play was later dubbed as "the Mad Dash," gave the Cardinals a 4-3 lead. Klinger followed by issuing an intentional walk to Marion, but Earl Johnson took the ball and retired Brecheen. Brecheen struggled on the mound during the bottom of the ninth. York started the action with a single and then Paul Campbell took his place as a pinch runner. Doerr singled. Pinky Higgins hit into a fielder's choice, but left runners on the corners. Roy Partee popped out to first base, and then McBride grounded into a 4-6 putout to give the St. Louis Cardinals the World Series win.