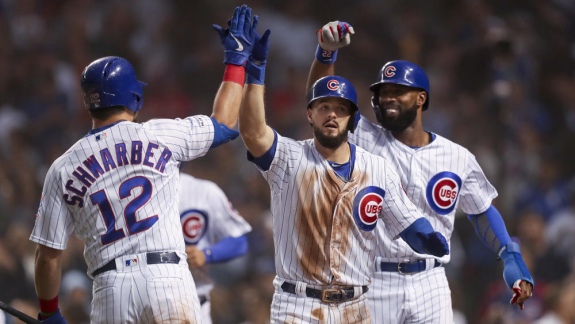 I generally don't write and post these after the fact, but a last-minute opportunity to attend this evening's Chicago Cubs (33-26) game presented itself. I cannot recall a time when I attended a game wearing my work clothes (at least I wasn't dressed formally) and I certainly don't recall the last game I attended without wearing a baseball cap. But these things happen.

Without a doubt, David Bote was the story of the game. He finished the game batting 4-for-4 with seven runs batted in. He started the scoring with a three-run homer in the fifth inning. Christopher Kamka, from NBC Sports Chicago, tweeted that Bote's seven-RBI performance was the most by a Cubs second baseman since Ryne Sandberg accomplished the feat on June 23, 1984. That was the game that became known as "The Sandberg Game."

Tonight's win, coupled with a Milwaukee Brewers loss, pushed the Cubs into first place with a one-game lead.