Last night, the Milwaukee Brewers (37-28, .569) beat their division rivals, the Pittsburgh Pirates (30-33, .476), and extended their winning streak to three games. Entering action on Sunday, the Brewers and Chicago Cubs (36-27, .571) are in a virtual tie for the National League Central lead. With the uneven number of games played, the Cubs technically have a higher winning percentage.

This afternoon, the Pirates and Brewers will close their three-game series at Miller Park. Milwaukee has its eyes fixed upon a series sweep. Since today's promotional giveaway is a Christian Yelich bobblehead, Miller Park will be packed and primed for the game. 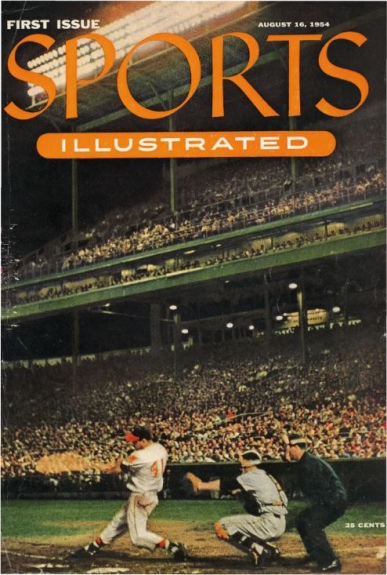 When Sports Illustrated published its first issue, baseball was prominently featured on the cover. The Milwaukee Braves slugging third baseman, Eddie Mathews, was pictured at bat. The cover's date read August 16, 1954. Must have been a photo from the dog days of summer, right? The Braves were knee-deep in the National League pennant race? Sorry, but no. The photo was taken much earlier during the 1954 season at Milwaukee's County Stadium. In fact, it was taken 65 years ago today.

Let's rewind to June 9, 1954. The Braves had just started their second season in Milwaukee. Mathews, then 22 years old, was only playing in his third major-league season. In 1952, he finished third in National League Rookie of the Year voting as a member of the Boston Braves. In 1953, he belted 47 home run and finished second in National League Most Valuable Player voting. When Mathews stepped to the plate for that photo, he had 11 home runs at that point in the season. That gave him a career total of 83. He would continue to hit 429 more in his hall-of-fame career.

That day, the New York Giants would beat the Braves, 4-0. Wes Westrum, a 31-year-old catcher, was behind the plate that day. Augie Donatelli was the home plate umpire. Mathews would finish the day 1-for-2 against pitcher Johnny Antonelli. He walked twice, but singled in the third inning.