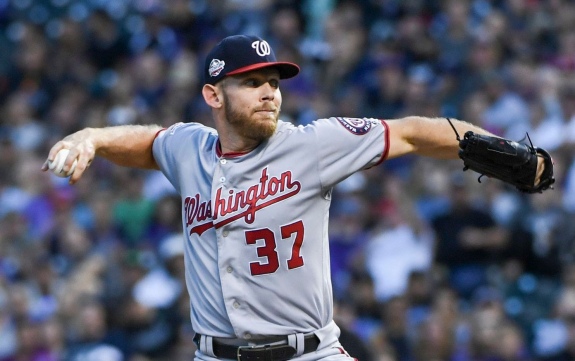 Perhaps this afternoon, it'll finally happen. On several occasions in the past, I've had tickets to see Stephen Strasburg pitch. Each time, he did not take the mound. Sometimes the reasons were injury related. Other times, the rotation changed due to weather. Regardless, I've never seen one of the game's best pitchers take the mound.

This afternoon, the Washington Nationals (72-57, .558) look to complete the three-game sweep of the Chicago Cubs (69-60, .535) at Wrigley Field. Both teams are in pursuit of the postseason. The Nationals are currently in second place in the National League East and trail the Atlanta Braves (79-52, .603) by six games. They also hold the top NL wild card spot. The Cubs are in second place in the NL Central and trail the front-running St. Louis Cardinals (70-58, .547) by 1 games. They also hold the second NL wild card spot with a 1 game lead over the Philadelphia Phillies (67-61, .523).