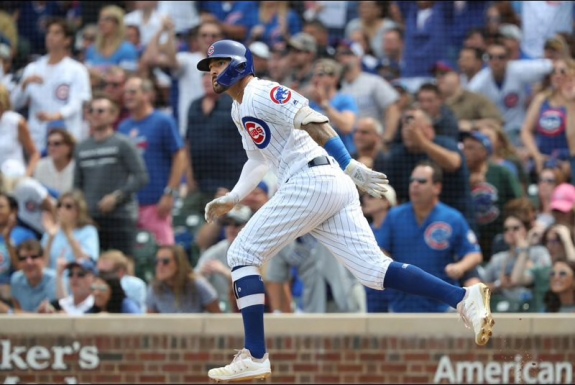 On Friday, Nicholas Castellanos slugged his second home run of the game during the second inning to lead the Chicago Cubs to a 7-1 win over the Milwaukee Brewers.

I'm headed back to Wrigley Field this afternoon for another game between the Milwaukee Brewers (68-66, .507) and the Chicago Cubs (73-61, .545). Yesterday, the Cubs' offense jumped of Milwaukee's Chase Anderson with a two-run first inning and a three-run second. Right fielder Nicholas Castellanos set the pace going 2-for-4 with two home runs and four RBI. The Cubs added insurance runs in the seventh and eighth innings to secure a 7-1 win.

The Brewers will send 26-year-old Zach Davies (8-7, 3.90 ERA) to the mound. During his last seven games, he pitched 35 innings and allowed 24 earned runs. That translates to a 1-6 record with a 6.17 ERA. The Cubs will answer with 35-year-old Cole Hamels (7-4, 3.73 ERA). Hamels, who is making his first start since returning from the paternity list, has been roughed up during his last seven starts. He managed to pitch only 29 innings and allowed 21 earned runs. During that run, he compiled a 1-2 record with a 6.52 ERA.