These are strange days.

When the Washington Nationals defeated the Houston Astros to win the 2019 World Series, nobody assumed the start of the 2020 MLB campaign would be delayed indefinitely. Of course, if someone hinted at these claims, naturally, everyone would jump to conclusions about a labor dispute between the Major League Baseball Players Association and team ownership. Even as recently as the Cubs Convention in January 2020, I would have failed to predict this outcome. Perhaps the decision surrounding Kris Bryant's service-time grievance against the Chicago Cubs would have spent ripples throughout baseball.

No, the delay is courtesy of COVID-19 (better known as coronavirus). Schools are closed indefinitely. Businesses are encouraging employees to work from home, if possible. International travel is severely restricted with domestic travel soon to follow. Churches have closed their doors, too. Chicago even canceled its St. Patrick's Day parades. No, the Chicago River won't be dyed green this year. Last week, the NBA suspended its season after two players from the Utah Jazz tested positive for the virus. The NHL followed suit immediately. Major League Baseball, which was nearly the end of Spring Training in Arizona and Florida, waited to make a decision. Ultimately, MLB suspended the remainder of its Cactus and Grapefruit league games, and then delayed the start of the regular season at least two weeks.

This is time of year that I post my up-to-the-minute schedule of games. Teams have yet to work out rescheduling games or ticket refunds. Personally, I was looking forward to catching the Cubs' second game of the season at Miller Park. We also had plans to catch a flight to enjoy one of the first games in the Texas Rangers' new ballpark. Here's my schedule of games and the current status of those games.

As an added bonus, here is the last time I watched each MLB team play live. 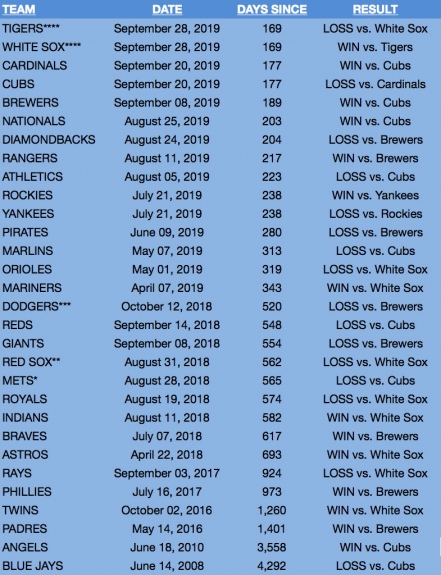