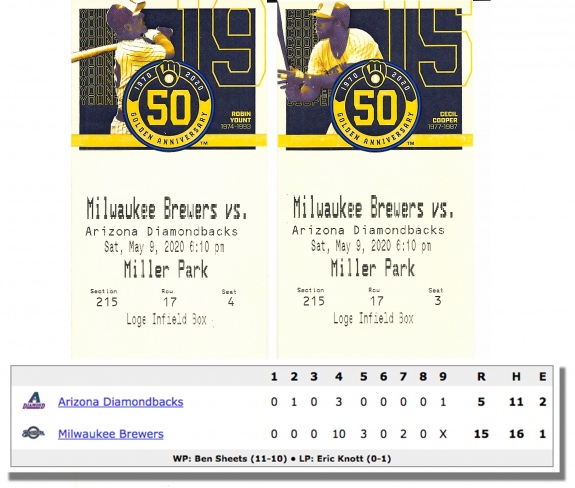 For a few weeks, Major League Baseball has tossed out plans to salvage a significant portion of the 2020 season. The COVID-19 pandemic continues to rage, but the latest rumors indicate that games could start toward the end of June or beginning of July. What are the odds of this happening? That's anyone's guess at this point. But should they?

Tonight, we were supposed to be at Miller Park for a game between the Arizona Diamondbacks and Milwaukee Brewers. Over at Baseball Reference, they are using Out of the Park Baseball 21 to simulate the 2020 season. Their simulation shows the Brewers winning, 8-3. Susan would be happy. Milwaukee grabbed a 1-0 lead in the bottom of the first and never looked back.

I had to dig through my log of old games to remember this, but my first game in Milwaukee was between the Diamondbacks and Brewers on Sunday, October 7, 2001 (originally slated for September 16, 2001, but rescheduled due to the 9/11 attacks). That game was also the final contest of the Brewers' regular season. The Diamondbacks would proceed to defeat the New York Yankees in the World Series.

Arizona took a 4-0 lead into the bottom of the fourth inning. Mark Grace, the former Chicago Cubs first baseman, belted a solo home run in the top of second inning. Another former Cub, Luis Gonzalez, clubbed a two-run blast in the top of the fourth. Reggie Sanders scored on a Matt Williams sacrifice fly.

In the home half of the fourth, Milwaukee's offense erupted for 10 runs on eight hits and two errors. Richie Sexson's home run into deep right field off of Bobby Witt proved fatal. The Brewers would add three more runs in the fifth and two in the seventh. Arizona added one extra run in the top of the ninth. Milwaukee won, 15-5. Ben Sheets earned the win to finish rookie season with an 11-10 record and a 4.76 ERA. Eric Knott suffered the loss and finished the regular season 0-1 with a 1.93 ERA.

And no, I never made it to Milwaukee County Stadium for a game. But I did see a former Beatle play there.