Related Content
Good in Dwight: A Day at the Dwight Historical Society
The Shot Heard ‘Round the Gym
Playing in Peoria: 2015 Midwest League All-Star Game 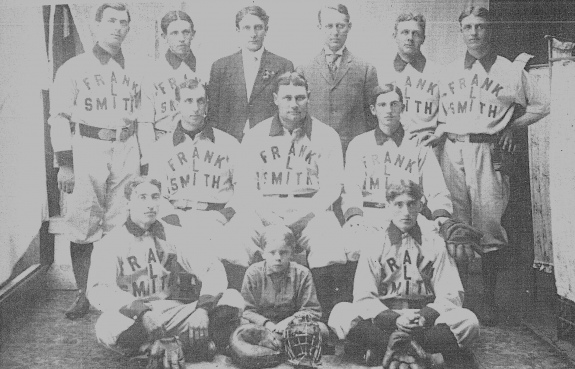 During the last year, I delved into Dwight, Illinois' rich baseball history. Thanks to the dedicated volunteers at the Dwight Historical Society, I was able to mine old newspapers and books to tell a story that (as a passionate baseball fan) I was surprised I didn't know. This project culminated in the Society for American Baseball Research's official biography of a Dwight icon, Col. Frank L. Smith. Enjoy the trip back to the late 19th and early 20th centuries. Play ball!

During his lifetime, Col. Frank Leslie Smith (1867-1950) adhered to a simple credo: the ends justified the means. The motto served him well as he built formidable business connections and amassed political clout on local, regional and national stages. By that same measure, it established the framework for his ultimate downfall. But during his youth, Smith's primary ambition was not to earn political accolades; he wanted to become a famous baseball player.

Smith was a devoted follower of the national pastime, and during his youth was considered an expert ballplayer. He once recounted a tale about a permanent memento of his boyhood passion for baseball -- two bent fingers. During his playing days, Smith patrolled every infield position. One day while serving as catcher, he was clipped by a foul ball that connected directly with his hand. With a flair for the dramatic, rather than exit the game early, the young backstop attempted to gain favor from his hometown Dwight, Illinois, rooters and had his fingers taped together tightly and returned to action.

Dwight has long been noted for its semi-professional baseball team, the F.L. Smiths, named in his honor. Located southwest of Chicago, its baseball history dates back to 1871 when the Dwight Renfrews -- named after Lord Renfrew, the alias used by the Prince of Wales while visiting the area on a hunting expedition in 1860 -- were organized. Rockford's Register-Gazette suggested in 1892 that Dwight, a first-class community that lacked any form of amusement, would be ideal for a minor league team in the Illinois-Iowa League. Dwight never became the home of a minor league franchise, but Col. Smith eventually played a significant role in the community's baseball landscape.