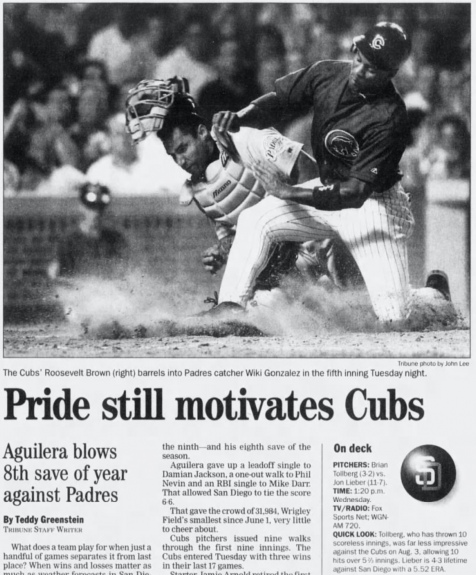 News clipping from the Chicago Tribune on August 30, 2000.

The phrase "these are uncertain and unprecedented times" is everywhere in 2020. While there are far more serious issues that society is grappling with, that phrase paints an accurate picture of the state of affairs in baseball. The novel coronavirus pandemic (COVID-19) threw a knee-buckling curveball just as spring training was coming to a close and fans' thoughts turned to Opening Day. MLB implemented a 60-game schedule in late-July, but fans are not allowed into ballparks. Parks are packed with cardboard cutouts and piped in stadium noise. This bizarre reality helps shine a light upon a personal baseball anniversary.

I've been attending baseball games since the late-1970s. My earliest games were played at Wrigley Field and Comiskey Park. Without lights at Clark and Addison, the Chicago Cubs played their games exclusively during the day. The Chicago White Sox played at 35th and Shields, but on the other side of the street in what is a parking lot today (but look for the old home plate). My Dad drove us past Milwaukee County Stadium in 1982 when the Milwaukee Brewers faced the St. Louis Cardinals during the World Series. I even caught a Cubs-Cardinals game at Busch Stadium in 1996. As the turn of the century approached, I wanted more. Since baseball was my game, I needed to get out of my media market and I established a goal. With a full-time job and graduate school in the rearview mirror, I was going to visit every Major League Baseball park.

When I embarked upon my journey to see all of the Major League Baseball parks, I had attended games at Wrigley Field, old Comiskey Park, new Comiskey Park (which would eventually be renamed US Cellular Field and Guaranteed Rate Field) and old Busch Stadium in St. Louis. With the addition of the Tampa Bay Rays (originally the Devil Rays) and Arizona Diamondbacks in 1998, that increased the number of teams to 30. I had only seen three teams play in their home park: Cubs, White Sox and Cardinals. Over the next nine days, I would attend eight games with a stop at the Hall of Fame in Cooperstown, New York. Of those eight games, I would be able to cross six parks off my list. The trip would begin and end in Chicago.

The bus ride started in La Crosse, Wisconsin and made its first stop in Milwaukee. I joined the group when the bus made its way to the Exel Inn of O'Hare in Elk Grove Village. Many of the participants flew into O'Hare to begin their journey, too. I hopped on board and we were on our way to a place I knew all too well.

When we arrived at Wrigley Field, we found our seats and everyone in the group started introducing themselves. It dawned on me that I was the youngest person in the group. Since schools were back in session, all of the family trips were finished. There was a couple from San Francisco, a dozen guys from Seattle, two Canadians, and a random assortment of others.

As the lone Cubs fan, I served as the Wrigley Field historian and tour guide for the evening. What an honor. It was nice being the local expert on the first day of the trip. I pointed out all of the quirks about the ballpark and talked about the history of the team. They asked so many questions and it was fantastic answering them all. They had questions about the manual scoreboard, the ivy, the neighborhood, and more. So much has changed in the 20 years since that night.

On our way to the park, Jay Buckley made it clear that we were on our own at the game. If we wanted to roam around the parks, we were encouraged to do so. He also made it clear that the games were the most important part of each stop along the way. If we had a day game, we were allowed free time at night. If we had a night game, we would have some time during the day. But two things happened as the Cubs played the San Diego Padres that we did not clarify: extra innings and meeting back at the bus following the game.

The Cubs won the game, 7-6, but it did require 13 innings. After the game ended, everyone made their way back to the bus parked on Sheffield, except for our two friends from north of the border. According to Jay, we would never drive during the night. Since our next stop was Pittsburgh, and we had extra innings, and had to spend time finding our wandering Canadians, we did have to drive a bit at night. Our hotel that evening was the Hampton Inn in Mishawaka, Indiana. We would have a quick turnaround in the morning. Since we were heading east, we had a lengthy bus ride ahead of us.