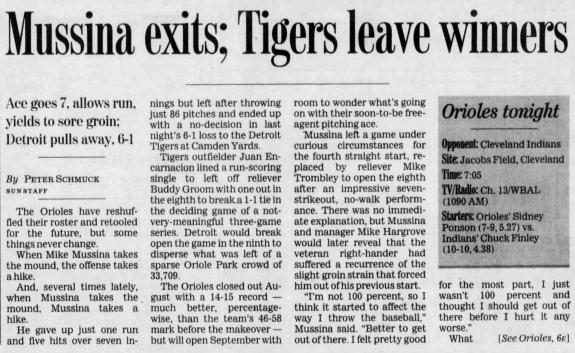 Do you remember baseball in the 1990s? A funny thing happened during that decade. Teams started knocking down their old ballparks to build new ones. Nothing unusual about that. What's funny, these new parks were designed to look like classic parks from yesteryear. Yes, it was the birth of the retro stadium. The retro craze was launched in Baltimore when the Orioles said farewell to Memorial Stadium and constructed Oriole Park at Camden Yards right in the heart of downtown.

When I woke up that morning, I couldn't wait to get to Baltimore. Jay said he had two special stops planned for us once we arrived. While on the road, we watched a documentary about the Baltimore Orioles. Quick bit of trivia. Did you know the Baltimore Orioles were the old St. Louis Browns? Did you know that the St. Louis Browns were the old Milwaukee Brewers?

Upon arrival in Baltimore, our first stop was at Memorial Stadium. This was the ballpark the Orioles called home from 1954 through 1991. Not only was this the home of Orioles greats Brooks Robinson, Jim Palmer, and Earl Weaver, it was also the home of Johnny Unitas and the Baltimore Colts. I have to admit, I wasn't aware the place was still standing. The ballpark was dilapidated, but we were able to get close. It was fitting that we experienced the old park knowing we would be at the new home of the Orioles later that evening. Here's a glimpse of the old place.

As game time approached, we made our way to the ballpark. Now was time for the second surprise. For some reason, I had forgotten that the most legendary baseball player of all time was born and raised in Baltimore. Just a few blocks from Camden Yards was the birthplace of George Herman Ruth, better known as Babe Ruth. The building is now the Babe Ruth Museum and Orioles Hall of Fame. What an exciting little stop before that night's game.

When I finally approached Camden Yards, I was amazed. We entered the park on Eutaw Street and passed the Babe Ruth statue. To the left was the famous warehouse that the Orioles converted into offices, restaurants and a team store. To the right, you could step behind the right field wall and watch batting practice and grab food from an outdoor grill. The concourse was marked with baseball-sized markers where long home runs pelted the walkway.

Growing up at Wrigley Field and Comiskey Park, I knew some of the issues, both good and bad, that accompanied old parks. They often featured unique architectural quirks that provided a bit of charm, but they also featured obstructed views due to support beams. Camden Yards featured old style brickwork that matched the neighboring warehouse. Through advances in ballpark design, there were no obstructed views on the lower level. This was truly a throwback to a different era.

Finally, it was game time. Something funny crossed my mind. What was Cal Ripken, Jr. best known for? Yes, he broke Lou Gehrig's consecutive-game streak. The streak ended on my birthday a few years earlier (September 20, 1998). After all these years of watching baseball and knowing that Ripken played every day, I finally made the trek to Baltimore, and Ripken was on the disabled list for the first time in his career. He would be activated the next game. That evening, the Detroit Tigers beat the Orioles, 6-1.

After the game, we headed off to the McIntosh Inn in Newark, Delaware. Our next destination was the Big Apple and the House that Ruth Built.