Related Content
It's Not Over, But…
The Cathedral of Baseball
Damn Yankees: ALCS Style

20 Years Later: The Cathedral of Baseball 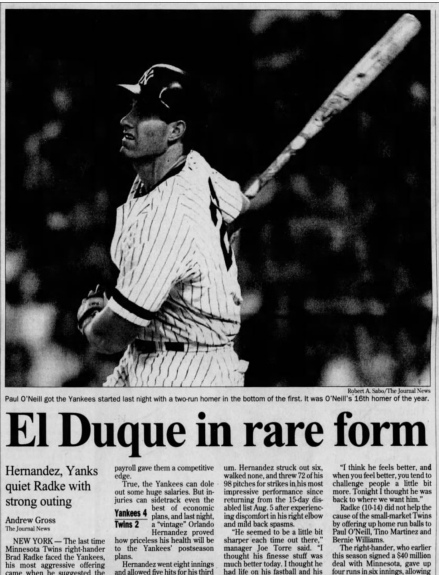 We had a busy day ahead of us. Seeing we were headed for New York, our group did not have as much free time as on other stops. Our bus packed up and left our hotel in Newark and headed straight for Manhattan. On the way, Jay popped in a video about a New York Yankees legend, Billy Martin. If you aren't familiar with Martin, he was the combative Yankees second baseman of the 1950s, and former Yankees manager of the late 1970s "Bronx Zoo" World Series winners.

When we arrived in Manhattan, a tour guide joined us on the bus and pointed out many significant landmarks. Periodically, we stepped off the bus for a few minutes to walk around. We stopped in Battery Park and gazed upon the Statue of Liberty. She stood in the vast distance, but sure enough, there it was. We stopped for a moment in front the World Trade Center, but I couldn't get a good photo since our windows didn't open. Whenever I travel, I generally try to visit the observation deck of the tallest buildings. We didn't have the time in New York. It's difficult to imagine what would happen just one year later. I still get chills when I remember that I was at what would become Ground Zero.

For lunch, we stopped at Mickey Mantle's Restaurant and Sports Bar across from Central Park. Of course, the restaurant was a shrine to arguably the greatest centerfielder of all time, and the New York Yankees. The walls were lined with photos of Yankees icons. Ruth, Gehrig, DiMaggio, Mantle, Berra, Stengel, Martin, Jackson you get the picture. After lunch, we were back on the bus and our tour resumed.

Finally, we arrived at Yankee Stadium. The House that Ruth Built. The Cathedral of Baseball. This was the home of the New York Yankees. I loathed the Yankees. Still do. But there's no arguing that they had everything I wanted. They had World Series titles dating back to the earliest days of baseball. They had the financial resources to continually place themselves into contention almost every year. On top of that, they were the reigning World Series champions.

Unfortunately, I had to make choice. Jay made it clear, if we intended to visit Monument Park inside the stadium, we had to go directly inside. If we didn't, we could tour the outside of the park. I opted to line up for Monument Park. I grabbed a few photos outside, but I was instantly in line. The usher counted off the number of people they would allow in line for Monument Park. I couldn't have been luckier. She closed the line right after me. For the next half hour, I inched ever so slowly down the third base concourse and finally entered Monument Park. Though I was impressed with all the plaques honoring the legends of Yankee lore, I wondered whether I should have toured the exterior of the stadium instead. I had to live with my choice.

Once the game started, it was just as I imagined. Bob Sheppard, the long time public address voice of Yankee Stadium, welcomed me. The Yankees fans were brutal. With every call against the Bronx Bombers, the umpires were greeted with a healthy dose of invective. Each good call was applauded. When it came time for the Seventh Inning Stretch, the fans sang "Take Me Out to the Ballgame," but they followed that up with Cotton-Eyed Joe. Didn't expect that. Seemed a touch uncharacteristic in New York. Once the game ended, and the Yankees defeated the Twins, 4-2, Frank Sinatra's "New York, New York" blared over the speakers.

In retrospect, I wish I had more time to take in the complete Yankee Stadium experience. I never imagined that New Yorkers would allow the team to demolish the old place and build a new, more contemporary park across the street. Okay, maybe the Mets fans would. I just assumed Yankees fans would scream blasphemy. Nevertheless, Yankee Stadium only stood for eight more seasons. In a sense, I do feel guilty not returning there for one more game.

Back on the bus and off the Holiday Inn at Yale in New Haven, Connecticut.