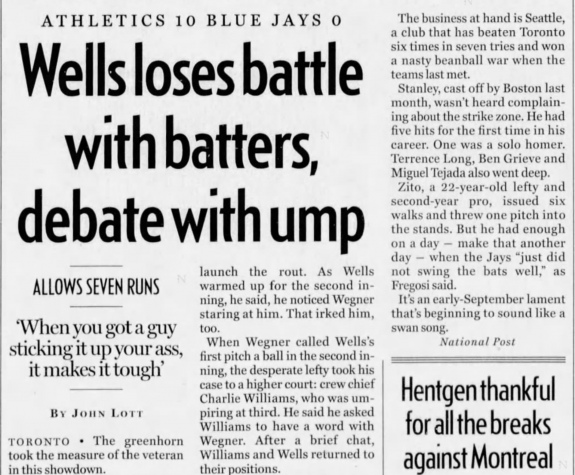 Twenty years passed between trips to Canada. The last time I visited was for a family wedding during the summer of 1980. I was six going on seven. This time, we were traveling to see the Toronto Blue Jays play at SkyDome (now called Rogers Centre). When SkyDome opened in 1989, it was innovative. It was baseball's first fully-retractable domed stadium.

After we loaded up the bus, we watched a documentary on the Canadian baseball teams: the Montreal Expos and Toronto Blue Jays. Following the video, our two Canadian travelers led a quick discussion on Canadian currency. They informed us that SkyDome would accept both U.S and Canadian money. They proceeded to educate the rest of us about loonies and toonies. Since the Canadians were back home, this would be their final stop with us.

As we approached Canadian customs, Jay informed us not to joke around with the customs agents. Just answer any questions honestly so we could move along without any issues. When the customs agent boarded our bus, he was told that we were entering Canada to see a baseball game in Toronto. He asked if we were all Americans. Jay mentioned that we had two Canadians and that they weren't coming back with us.

"Get me the Canadians," the guard said. They stepped off the bus for a few minutes and returned.

Shortly after we entered Canada, we made a brief stop at Niagara Falls. It was cool and overcast, but it was an amazing stop. I have to agree with everyone, the Canadian side is more beautiful than the American side.

We arrived at SkyDome early, so everyone split up for lunch before the game. I joined a group that stopped at the Hard Rock Cafe in SkyDome. Yes, I bought a shirt and still wear it today. It was amazing having lunch and gazing out on the field. The players were taking batting practice at the time. It was warm outside, so the roof was open. The field appeared bright and green. I was curious to see how the roof worked when it closed. As we were wrapping up lunch, I noticed that the ballpark was getting dark, almost like a gigantic cloud was overhead. I noticed that the stadium lights turned on. I jumped up and ran to the window and looked up. The roof was closing. I managed to see the roof close the final few feet.

When we stepped inside the ballpark, the Canadians on the trip met up with their families. Our seats were right on the field. The game was over before it started. The Oakland A's scored five runs in the top of the first inning and would eventually win, 10-0.

Over the next decade, ballparks would change. All of the newer places have restaurants and more elaborate shops built into them. SkyDome was the first that I visited that seemed more like a shopping mall with a baseball field inside. The ballpark had restaurants and a hotel that looked out over the outfield. I'd finally seen baseball played north of our border. For the record, the Blue Jays remain the only team outside of the United States to win the World Series. They accomplished that feat in 1992 against the Atlanta Braves, and in 1993 against the Philadelphia Phillies. Following the 2004 season, the Expos moved to Washington, D.C. and became the Nationals. I guess the Blue Jays can claim that distinction for quite some time.

Following the game, we had some free time. I headed next store to visit the CN Tower. I rode the elevator to the top and spent some time at the observation deck. A few hours later, we boarded the bus and headed for the Howard Johnson Plaza Hotel in Hamilton, Ontario.