Good in Dwight: A Day at the Dwight Historical Society 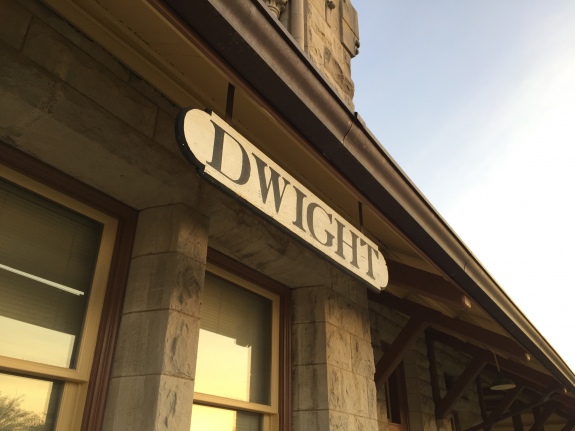 During the Harrison administration, Rockford's Register-Gazette described Dwight, Illinois, as a first-class community that lacked any form of amusement. The newspaper suggested that the village of roughly 1,500 residents at that time, located southwest of Chicago, would make an ideal home for a minor league baseball franchise in the Illinois-Iowa League. That was 1892, and no minor league team has ever called Dwight home.

Fast forward to 1986 when my family moved to Dwight. Just a few months after unpacking, the New York Mets beat the Boston Red Sox in seven games to win the World Series*. Around that time, I reached a high in my baseball card collecting. I had loads of Chicago Cubs, specifically Ryne Sandberg and Leon Durham. The piles of Mike Greenwell cards would soon follow. Over the next several years, I played high school and Pony League ball, I organized my wiffle ball league, and watched tons of MLB games. But oddly enough, that was when my card collecting dwindled. I also never knew much about Dwight's rich baseball history.

While living there, I heard the legend of the Prince of Wales' trip to Dwight in 1860. Traveling under the alias Lord Renfrew, the future King Edward VII visited the area while enjoying a hunting expedition. Subtle name, huh? Perhaps this event will weave itself into a future storyline of Victoria. Probably not, but one of Dwight's earliest baseball teams adopted the name Dwight Renfrews.

But there is a bizarre story about a baseball game from that era that appeared in the Chicago Tribune.

Prior to a game between the Renfrews and Pontiac Athletics on August 14, 1874, Dwight's Captain J.B. Parsons commanded an elaborate military spectacle. During the display, a steam engine from Pontiac's fire company exploded and injured a number of onlookers. To further compound the drama, a cannon fired prematurely and accidentally shot a gentleman named Slane Turner in the arm and body. Despite the commotion, they played ball and Dwight defeated Pontiac, 20-13. The show must go on, right?

After joining the Society for American Baseball Research (SABR) in 2016, I have enjoyed contributing to the organization's publications and Baseball Biography Project (BioProject). I have written about Game Two of the 1918 World Series, pitching coach Leo Mazzone, and stories about two games at Brooklyn's Ebbets Field (coming soon). Recently, I exchanged emails with Mary Flott, a retired speech and communications instructor from my high school who volunteers for the Dwight Historical Society. She asked if I knew that the Cubs had played an exhibition game in Dwight. That tidbit unlocked a treasure trove of Dwight baseball history relegated to the yellowing newspapers of yesteryear.

During high school, I heard about Col. Frank L. Smith. He possessed powerful political drive and was instrumental in Dwight's early days. Smith, who received his honorary title from Illinois Governor John Riley Tanner, gained notoriety on a national political stage, but I never knew of his passion for the national pastime and formation of the village's semi-professional team. Earlier this summer, I wrote his official SABR bio as an individual who was famous outside of baseball. He was responsible for bringing multiple professional teams to Dwight for exhibition games during his lifetime. The Detroit Tigers (1907), Washington Senators (1908), Chicago Cubs (1912), Pittsburgh Rebels (1915) and Chicago Whales (1915) appeared in Dwight because of Col. Smith's efforts.

After digging through my Col. Smith notes, I noticed the name Eddie Higgins kept appearing in box scores. Other than his pitching performance against the Tigers on October 22, 1907, he did not feature prominently in the remainder of Smith's narrative. He was just a Dwight High School kid with great arm, right? But there was too much to discard. After all, Ty Cobb noted that Higgins displayed major-league potential. That's lofty praise for a 19-year-old kid from a future Hall of Famer.

I started digging deeper into the story of Thomas Edward "Eddie" Higgins (1888-1959). After pitching successfully for the F.L. Smiths in 1907, he began a circuitous journey through baseball leagues from 1908 through 1915. He donned uniforms and pitched for the Bloomington Bloomers, Little Rock Travelers, St. Louis Cardinals, Denver Grizzlies (one game), Terre Haute Stags, Tacoma Tigers, Peoria Distillers, Streator Boosters and Rockford Wakes. He also earned just as many nicknames ranging from Doc to Irish, Singing Hig to Caruso, and the most unusual Zimri. Higgins pitched in legendary ballparks like Philadelphia's Baker Bowl, Cincinnati's Palace of the Fans, New York's Polo Grounds, St. Louis' Robison Field, Brooklyn's Washington Park, and Chicago's West Side Grounds. While playing baseball he became a dentist, served at Camp Grant in World War I, and opened his own practice. Sadly, Higgins' story comes to a tragic ending. The last decade of his life, Higgins was hospitalized after suffering a heart attack and stroke which lead to financial complications.

During his playing career, Higgins was not immortalized often on cardboard. Not having the deepest experience collecting baseball cards, I was not certain how easily if at all I could get my hands on one of these cards. Over the last two years, I have gotten to know Jason Schwartz, a co-chair of SABR's Baseball Cards committee. He admitted that minor-league tobacco cards would be difficult to obtain as they do not become available often. Sure enough, magic happened. Earlier this month, he connected me to a card dealer who just found one in Los Angeles. I was able to get my hands on a 1911 Obak (T212) Eddie Higgins card that was listed as being in very good/excellent condition. On the card he is depicted as a member of the Class-B Tacoma Tigers of the Northwestern League where he pitched a one-hitter against the Vancouver Beavers on July 31, 1911. 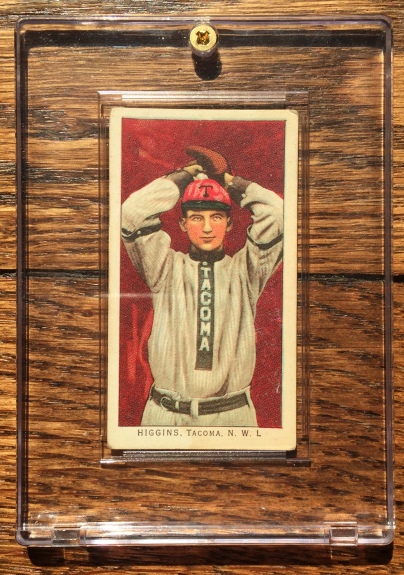 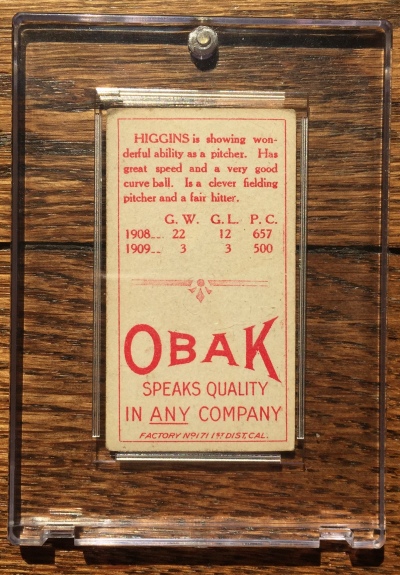 Yesterday, I visited the Dwight Historical Society which is housed inside the village's Chicago & Alton train depot. The limestone building, which designed by architect Henry Ives Cobb, was placed on the National Register of Historic Places in 1982. Just think, Ty Cobb (no relation to the architect) passed through this station when his American League-pennant-winning Tigers arrived in 1907. While there, I was able to reconnect with Mary Flott, her husband Bill (my eighth-grade math teacher), and Kim Drechsel (docent). I was honored to hand over the card to Kim as he donated countless hours researching the Dwight Star & Herald newspapers archives to unlock the baseball stories of Col. Smith and Eddie Higgins. If Dwight has a civic hall of fame, I fully endorse Mr. Drechsel's enshrinement.

* Dwight Gooden was 0-2 with an 8.00 ERA during that Series. He fanned nine batters in nine innings. And no, Gooden has no connection with the village. It was named in honor of Henry C. Dwight. While not a Mets or Yankees pitcher, he was a New York capitalist who provided funding to construct the railroad from Joliet to Bloomington. According to available records, he lost a fortune in the venture.