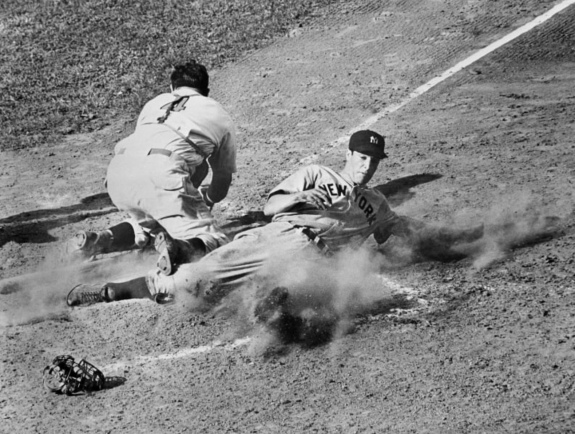 [I]New York Yankees legend, Joe DiMaggio, ties Game Four of the 1939 World Series against the Cincinnati Reds. The Yankees would sweep the Series.

The 2020 postseason picture is now set with American League games scheduled to start on Tuesday afternoon. National League teams begin on Wednesday. Speaking of the National League, what a crazy finish. Going into the final day of the regular season, four teams were battling for the last two playoff spots. By beating the Milwaukee Brewers, the St. Louis Cardinals secured second place in the National League Central. But in order for the Brewers to lock up a wild card spot, both the San Francisco Giants and Philadelphia Phillies needed to lose. Somehow that scenario worked out. The Brewers and Houston Astros reached the postseason with losing records. With 16 teams-more than half of the franchises-reaching the postseason, that was a likely possibility.

Since the Giants failed to advance, that eliminated a healthy dose of potential World Series rematches in 2020. Most of those dated back the franchise's time in New York's Polo Grounds. With the Phillies bowing out, that removed a few from recent memory. But with the Yankees, Dodgers (Brooklyn and Los Angeles), Cubs, Athletics (Philadelphia and Oakland), and Braves (Boston, Milwaukee and Atlanta), we can still see 49 World Series from the past. Here's a look.