Oh, Henry! The Bunch of Bushwackers Who Knocked off the White Sox 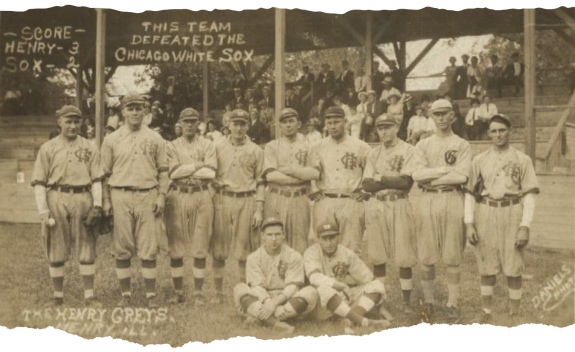 The 1915 semipro Henry Greys will always be known as the team that beat the Chicago White Sox.

Manager Pants Rowland was apoplectic. The Chicago White Sox were suffering a three-game losing streak, including dropping four of the five-game series against the Boston Red Sox at Comiskey Park. The South Siders (53-33), who led the American League before that series, slipped to third place and trailed the front-running Red Sox (52-29) and second-place Detroit Tigers (52-31). To further complicate matters, American League president Ban Johnson suspended Rowland indefinitely following his recent ninth-inning ejection by Silk O'Loughlin. With an open date on Wednesday, July 21, 1915, a one-day jaunt to Henry, Illinois, a small community situated on the Illinois River could not have come at a more opportune time for Rowland and his team.

Adorned in grand fashion with flags and decorative banners, Henry swelled with civic pride. Community leaders, spearheaded by Al Booth of the Swan Lake Gun Club, spared no expense for what local newspapers billed as the "greatest event in the history of Henry." That claim is difficult to dispute as the community of roughly 1,800 residents welcomed a crowd of nearly 5,000 fans--undeterred by the rainy conditions--for an exhibition game at Pavilion Park between the semiprofessional Henry Greys and the White Sox. The Henry Base Ball Association offered a money-back guarantee to fans if Charles Comiskey's regular lineup, including "the wonderful Eddie Collins ... the greatest, fastest and highest priced second baseman in the world," did not play.

According to the Henry Republican, spectators arrived via diverse modes of transportation from "train, steamer, auto, carriage and wagon." Nearly 1,000 guests chartered the Verne Swain steamboat from nearby Peoria to celebrate the return of Rowland who managed the Three-I League's Peoria Distillers one season earlier. Reporters from 30 local papers within a 40-mile radius planned to endure the conditions and document the affair. Political and financial heavyweights from nearby municipalities--Tiskilwa, Princeton, Buda, Kewanee, Galva, Toulon and Wyoming--were on hand. White Sox fans from Chicago even made arrangements to arrive via a special train on the Chicago, Indiana & Southern Railroad.

An elite team of the era, the Henry Greys were crowned 1914's semipro champions of Illinois after compiling a 36-5 (.878) record. When the team secured its funding and organized for 1915, they fielded a nearly identical team from the prior season. One noteworthy addition was signing Jimmy Johnson, an outfielder on Rowland's Distillers squad in 1914. Throughout 1915, the Greys proved equally dominant finishing 46-9 (.836). The team even elevated its level of competition by scheduling games against the United States Army team, Rube Foster's American Giants, the Cuban All-Stars from Havana, and the Chicago Union Giants. The Greys learned a lesson during their mid-August 1914 exhibition game loss against the Chicago Cubs. They needed a genuine draw if they intended to size up against the White Sox.

Greys management contacted the Three-I League's Davenport Blue Sox to inquire about and secure the services of the team's brightest pitching star, Jesse Barnes. Barnes, who would win 152 games during a 13-year major-league career, was just a 22-year-old hurler at the time. He had a limited trial with the Cubs in May 1914. Manager Hank O'Day purchased Barnes for a 30-day tryout, but he never gave the young hurler any game action. The Cubs shipped the youngster back to Davenport once the trial period expired. Primed for his showcase, Barnes made 30 pitching appearances (19 starts) with Davenport in 1915 and compiled an 18-6 record with a 1.38 ERA. 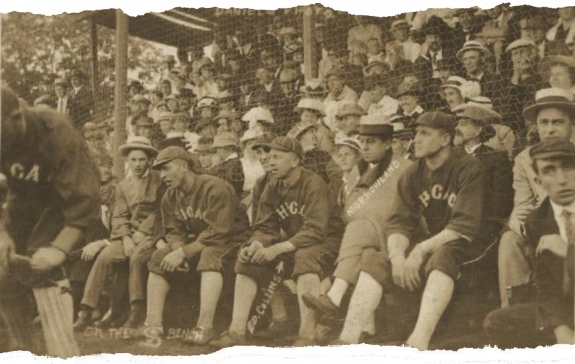 Despite inclement weather, the festivities commenced in the morning and extended late into the evening. Performances included brass bands, singing quartets, vaudeville acts, and a seven-piece orchestra. Fans packed the stands and amphitheater two hours prior to the game's start. They shouted and sang throughout the game and never succumbed to the steady showers.

Ed Walsh, the future Hall of Famer, pitched the first two innings for Chicago and surrendered two hits. The game remained scoreless through two innings until the White Sox broke the deadlock in the top of the third. Blackburne connected for a double, advanced to third on a Barnes miscue, then crossed the plate following Murphy's sacrifice fly. The Sox maintained a 1-0 lead until the home half of the seventh.

Henry evened the score when center fielder Lester Bassett tripled off of Klepfer, then scored on catcher Alfred Luvisi's single. With the scored tied 1-1 in the bottom of the eighth, the Greys seized a 3-1 lead following back-to-back singles by first baseman Ralph Ginnochio and second baseman "Red" Williams, and a two-out double by left fielder "Dutch" Wagoner.

With their backs to the wall in the top of the ninth, Fournier clobbered a Barnes fastball. The local paper noted that Fournier's home run was "easily the longest hit ever made on the home field." According to reports, the batted ball left the yard and landed in an oat field. Despite the mammoth blast and clinging to a one-run lead, Barnes was unflappable and squashed the rally and solidified the Henry Greys' 3-2 victory over the White Sox.

The Henry Republican noted that "Barnes' whip was great, his drops were greater and his head the greatest." During a 1970s interview, Frank Williams, the Greys' second-string catcher said, "[Pitcher Hank] Cooper told [Barnes] what to throw and won the game sitting on the bench." Days after the game, the Blue Sox sold Barnes to the Boston Braves for $2,500. On July 30, he pitched two innings in relief for the Braves against the Cincinnati Reds.

Though just an exhibition game with no bearing on the American League standings, Rowland's day away failed to provide the quiet respite he craved. "Never again will I take my Sox down in the brush to be dragged in the mud and battered around by a bunch of bushwackers," Rowland said, following his team's loss. The White Sox promptly returned to Comiskey Park for a three-game set against the New York Yankees and returned to winning ways and completed the sweep.

This article will appear in the SABR Chicago Chapter May-June 2021 newsletter.