In her new book, The Big Fella: Babe Ruth and the World He Created, award-winning author Jane Leavy used a three-week barnstorming tour from October 1927 as the structure for telling the Sultan of Swat's life story. Baseball barnstorming tours were commonplace in the early 20th century long before free agency, multi-year contracts and life-changing salaries. For baseball fans living too far from major-league cities, barnstorming tours brought the national pastime much closer to home. These games weren't just exhibitions and sideshow events; these were opportunities for local semipro teams to measure their skills against that era's living legends.

Earlier this year, I had a chance encounter with Mary Flott, my former high school English and communications teacher. Recalling my insatiable interest in Chicago Cubs baseball during my days as a student at Dwight High School, she asked if I knew that the Cubs once visited the town and played against a local semi-pro team. Much to my astonishment, I did not. She introduced me to Kim Drechsel, a docent from the Dwight Historical Society.

During my electronic and face-to-face discussions with Drechsel, he unlocked the story of Dwight's semi-pro baseball team from the early 1900s, the F.L. Smiths. At the time and possibly still today Dwight was best known as the home of the Keeley Institute, where alcoholics were administered the Keeley Cure (also known as the "gold cure"). The baseball team's name came from its founder and owner, Colonel Frank Leslie Smith. During his youth, Frank L. Smith was known for his aggressiveness and will to dominate. He had a passion for baseball, but enjoyed even more engaging in the on-field scuffles that oftentimes brought his sandlot games to an early end. As an adult, the Colonel is best known as the chairman of the Illinois Commerce Commission who attempted to buy a United States Senate seat in 1926. 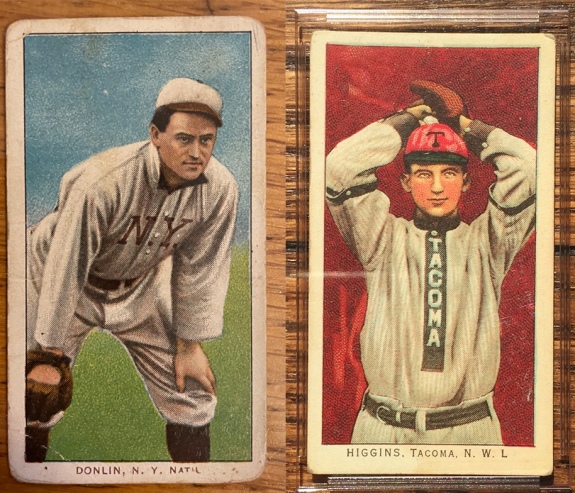 For a community with less than 3,000 residents at that time, the F.L. Smiths attracted several future major leaguers such as "Turkey" Mike Donlin (St. Louis Perfectos/Cardinals, Baltimore Orioles, Cincinnati Reds, New York Giants, Boston Rustlers and Pittsburgh Pirates), George Cutshaw (Brooklyn Dodgers/Superbas/Robins, Pittsburgh Pirates and Detroit Tigers) and Eddie Higgins (St. Louis Cardinals). Between the years of 1907 and 1915, the F.L. Smiths played at least five barnstorming games against big-league talent from the American, National and Federal leagues. The Detroit Tigers, Washington Senators, Chicago Cubs, Pittsburgh Rebels and Chicago Whales all passed through the village on the Chicago and Alton Railroad southwest of Chicago.

While news clippings exist for each of those games, the treasure of the Dwight Historical Society's collection is a sepia tone photograph from October 22, 1907 (shown above). The photo is the only known record of the game between Ty Cobb's Detroit Tigers and the F.L. Smiths played at Dwight's West Side Park. The Tigers, having just lost the World Series to the Chicago Cubs, made a brief barnstorming tour through the Midwest. Detroit hammered Dwight that afternoon, 8-1. Following the game, the locals hosted a banquet in honor of the American League champions.

Contemporary players are often labeled as prima donnas who complain about the difficulties of intercity travel and grueling schedules, but attitudes were much the same 100 years ago. Look no further than June 7, 1915. The Federal League's Pittsburgh Rebels had a nearly one-week-long gap in their schedule and stopped in Dwight for a mid-season exhibition game. Pittsburgh's manager "Rebel" Oakes refused to play his starting roster that afternoon due to players wading through ankle-deep mud at West Side Park. The Rebels were in a pennant race with the Kansas City Packers. As the Pittsburgh Press reported the next morning, "Manager Oakes will probably take defeat from the future greats rather than risk injuring his men."

Today, nothing remains of Dwight's West Side Park or the F.L. Smiths save for occasional photographs and a few tales documented in local newspapers. The site of the former park, located along what is now old Route 66, consists of apartments and homes today. Frank L. Smith would serve as a member of the United States House of Representative from Illinois' 17th District from 1919 to 1921. In 1921, he became the chairman of the Illinois Commerce Commission. At the close of 1926, Illinois Governor Len Small appointed Smith to fill the U.S. Senate seat of the late William B. McKinley, but the Senate voted to not allow him to qualify due to questionable campaign donations from public utilities. During a special election in 1927, Smith was once again denied. Smith passed away in 1950 at the age of 82.

Sources:
1) Wooddy, Carroll H. The Case of Frank L. Smith: A Study in Representative Government. Chicago, Illinois. The University of Chicago Press, 1931.
2) McClelland, Edward. "The (Other) Man Who Tried to Buy a Senate Seat."
3) "Rebels Lose in Race by Idleness." Pittsburgh Press. June 8, 1915.