Retro Writing: What the Cubs Should Do for ‘92

Rummaging through old boxes can lead to pleasant surprises. While doing just that over the holiday season, I discovered several examples of my earliest baseball writing dating back to my high school and college classes. Those classes were my first serious writing lessons. At the time, my baseball reading was limited to the Chicago Tribune's Sports section, factoids on the backs of baseball cards, articles in Chicago Cubs team yearbooks and Sports Illustrated.

This paper was written for my English 106 course at Elmhurst College (Spring 1992 / April 1, 1992). No edits were made to the original unless suggested by the instructor. Enjoy. 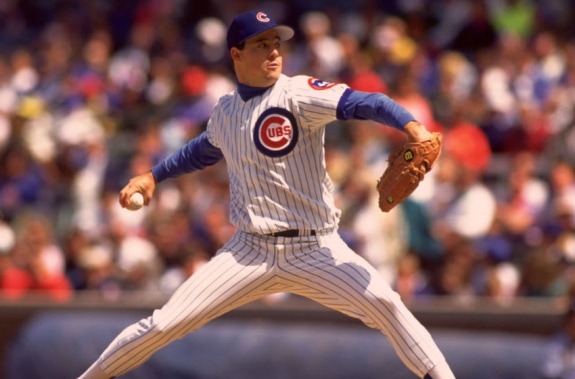 Before the 1991 season, the Chicago Cubs signed two big name players, George Bell and Danny Jackson. Cub fans were ecstatic. A starting pitcher and another power hitter seemed like the necessary element to improve the ball club. The starting pitchers for 1991 included Rick Sutcliffe, Mike Bielecki, Greg Maddux and Danny Jackson. Danny Jackson, a free-agent from the Cincinnati Reds, seemed like the missing ingredient. After the 1991 season, Greg Maddux was the only starter to pitch consistently. Maddux led the National League with 37 starts, completed seven games and pitched 263 innings. Maddux also finished second in the National League with 198 strikeouts. No other Cub pitcher posted statistics near these. Rick Sutcliffe, the ace veteran, spent considerable time on the disabled list. A trade sent Mike Bielecki to the Atlanta Braves before the completion of the regular season for two young prospects. The missing ingredient, Danny Jackson, suffered arm troubles that ailed him in past seasons forcing him on the disabled list. Jackson only earned 13 wins since his 23 win season four years ago. The Chicago Cubs signed the talented, but unstable Danny Jackson. Management did not consider his arm troubles in the past.

Along with the acquisition of Danny Jackson, the Cubs signed free-agent George Bell from the Toronto Blue Jays. The purpose of Bell is filling the revolving left field position, and to follow Andre Dawson in the lineup. George Bell, like Andre Dawson, brings power to the Cubs lineup. Management thought more power would aid the new pitching staff. The Cubs do not need to sign additional power hitters. Andre Dawson consistently hits an average of 30 home runs per year. In 1987, Dawson hit a career high 49 home runs. Last season Dawson contributed 31 home runs, two of which were grand slams. In 1989, Ryne Sandberg hit 30 home runs, and 40 in 1990. A major league lineup does not need several bug guns, it needs base runners.

Over the past several years, the Chicago Cubs led the National League in team batting average. In 1991, the Cubs team batting average was .253. The present lineup can reach base and score runs. If Jerome Walton or Ryne Sandberg can reach base, the stolen base is a likely idea. In 1991, Sandberg's on-base percentage was .379, with 170 hits and 284 total bases. Mark Grace follows in the third slot and can hit for average and drive in runs. Last season Grace finished second on the Cubs with 169 hits. Dawson and Bell follow with the home run threat. Last season, Dawson led the Cubs with 104 runs batted in, and was fifth in the National League. Following them are Dunston, Salazar, Girardi and the pitcher. The Cubs lineup is well constructed.

If the Chicago Cubs want to improve upon last years' record of 77-83, management must look to acquiring a talented, but stable pitcher. The pitcher must not be an aged veteran beyond his prime, must not have recurring ailments from previous seasons and must possess the determination necessary to spark the Chicago Cubs and set fire to Major League Baseball.

Postscript: The day before this paper was submitted, the Chicago Cubs and Chicago White Sox made a trade that shipped outfielder Sammy Sosa and left-handed pitcher Ken Patterson to the Cubs in exchange for outfielder George Bell. I included a note on an index card with the details to my instructor, Donna Johnson. 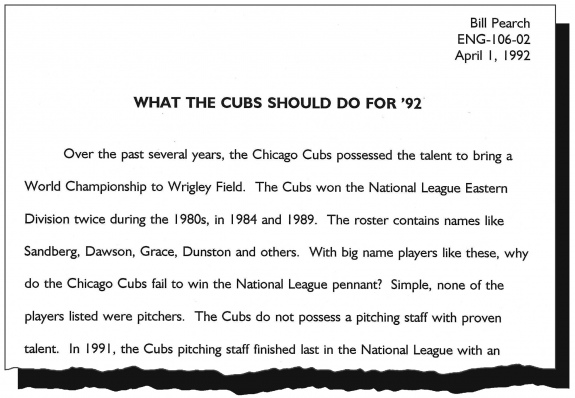