Rummaging through old boxes can lead to pleasant surprises. While doing just that over the holiday season, I discovered several examples of my earliest baseball writing dating back to my high school and college classes. Those classes were my first serious writing lessons. At the time, my baseball reading was limited to the Chicago Tribune's Sports section, factoids on the backs of baseball cards, articles in Chicago Cubs team yearbooks and Sports Illustrated.

This paper was written for my Creative Writing class at Dwight Township High School (April 26, 1991). If I remember correctly, we were asked to develop a short story based upon a real news clipping. No edits were made to the original unless suggested by the instructor. Enjoy. 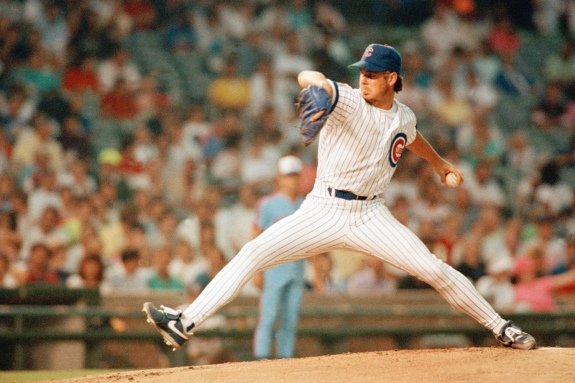 Today is the last exhibition game of the season for the 1991 Chicago Cubs. The Cubs are taking on the Milwaukee Brewers from the American League. Last night the Cubs won 2-1 at Milwaukee, but this is Wrigley Field. The most exciting aspect of this game is to see if Mitch Williams will remain a member of the Chicago Cubs.

"Over the entire spring training, the talk of Mesa has been Mitch Williams will become a Philadelphia Phillie," said one Cub fan to another. The two Cub fans are sitting in the upper deck on the third base side. The taller man turns to the other, "Well, we're in the bottom of the eighth and we have a 2-1 lead. Let's just hope Mike Harkey gets the win and Paul Assenmacher can get the save." Both men sit and nod their heads in agreement. "Let's just hope they keep that Mitch Williams character out of the game! Do you realize how many games he blew for the Cubs in 1990?" The taller man sighs, "That is such a tremendous number of games!"

As the Cubs are retired in the bottom of the eighth, the hopeful crowd feels confident of their ball club. "Well, here we go into the ninth! We have got this game wrapped up. We have just swept the Brewers!" Don Zimmer trots out of the dugout and up to the pitchers mound. Popeye signals to the left hander in the bullpen. "Oh my God! Look! It's MITCH!" The two upper deck fans begin to almost cry. "Well, I guess a split isn't bad for a spring training series. And hey, they aren't even in our league."

Mitch Williams begins to pitch, and walk, and give up hits. "I hate than man's style of pitching! If you call that pitching." The shorter man turns to the other, "He is definitely living up to his nickname of 'Wild Thing' today." The first batter Mitch Williams faces is walked on four straight balls that weren't even close. "There is a runner on first. I wonder how we will score this inning?" The two laugh at the joke, but deep down are quite concerned for the Cubs. The next batter approaches the batters box. Certainly this batter is scared of catching a Mitch Williams fastball square in the face, but there is a good chance Mitch will screw it up.

As Mitch continues to pitch, two men finally were walked. "Frey said maybe a deal can be made with Philadelphia. All Frey wants is one more prospect added to the list for a trade." The two men sigh and swing their heads in sadness. "Look at what he's done, no outs and two men walked!"

Don Zimmer walks out of the dugout and toward the mound. Zimmer signals to the bullpen for Dave Smith. "Do you know Dave Smith should be the reliever of the future replacing Mitch Williams." The very next batter hits a solid double off Dave Smith and the Cubs trail 3-2. "God, I hope Jim Frey has enough sense to trade him away!"

The Cubs have just lost a close game 3-2. They should have easily won that game 2-1, if it wasn't for Mitch Williams. The very next day saw Jim Frey make a phone call to Philadelphia. Mitch Williams was traded to the Philadelphia Phillies for young pitching prospects Chuck McElroy and Bob Scanlan. I guess the ghost of Mitch Williams will be remembered with that of Goose Gossage. Both men could prove anyone could hit a homerun at Wrigley Field with the wind blowing straight in at home plate.

Postscript: According to the hand-written notes at the end of the paper, I earned an A-. My teacher, Tom Patterson, added few notes: "This is more of an essay than a short story, but it's generally well-written. Many who haven't fulfilled their promise for the Cubs over the years. Maybe things will work out this season. Then again, maybe not."