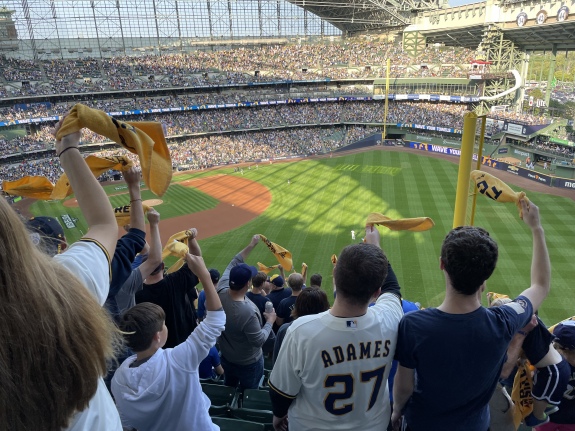 Milwaukee Brewers fans get ready for the first pitch of Game 2 of the 2021 National League Division Series against the Atlanta Braves.

Back to live baseball this evening.

Let's set the record straight. We had tickets to see the Milwaukee Brewers host the Arizona Diamondbacks on Saturday, April 2. Thanks to MLB's lockout, we missed out on Opening Week festivities. Regardless, I'll be enjoying MLB action after work.

As the 2021 season came to a close, I was fortunate to catch two postseason games. Even better, those two games featured both pennant-winning teams. Our last game of the year was Game 3 of the ALDS between the Houston Astros and the Chicago White Sox. The White Sox won that game, 12-6, but the Astros ultimately won the American League pennant. But the night before, I attended Game 2 of the NLDS between the Atlanta Braves and Milwaukee Brewers at American Family Field. The Braves won the game, 3-0, and eventually defeated the Astros in the World Series.

Tonight the stakes are not nearly that high as the Brewers entertain their division foes, the Pittsburgh Pirates. With the delayed opening to the season, MLB's standings do not paint an accurate picture of team performances yet. The Pirates (5-4, .556) are in a tie with the Chicago Cubs for second place in the National League Central. The St. Louis Cardinals (5-3, .625) hold a half-game lead in the division. Holding a .500 record, the Brewers (5-5) trailing the Cardinals by one game.

Pittsburgh will send 28-year-old Zach Thompson (0-0, 4.50 ERA) to the mound. He made one start this season and lasted four innings against the Cubs on April 13. The 6-foot-seven righthander allowed two earned runs and fanned three.

Milwaukee will counter with 26-year-old Eric Lauer (0-0, 6.23 ERA). Lauer, nicknamed Gomer, also made one start this season pitching 4 1/3 innings against the Baltimore Orioles on April 12. He surrendered three earned runs on three hits.