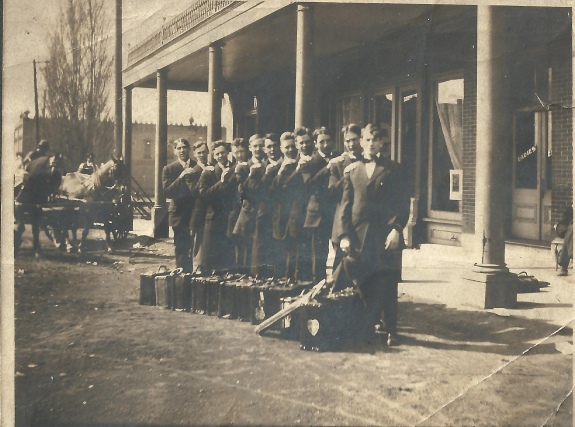 The Seattle High School baseball team took a two-month trip to the Midwest, East and Southwest in the summer of 1907. / David Eskenazi Collection

Captivated by the energy of the 1906 World Series between Chicago's two major-league franchises, Dwight's Col. Frank L. Smith aimed to bring the same spark back to town. His intent while organizing his namesake baseball team for 1907 was twofold -- test his players' skills while shining a light on his burgeoning political aspirations. The F.L. Smiths challenged a mix of neighboring town teams, salaried semipro squads and traveling novelty acts. Smith dazzled the populace with home games against the Nebraska Indians and Cuban Stars of Havana, while the season culminated with a contest against the American League's pennant-winning Detroit Tigers. Dwight's nine finished the campaign winning 22 games. 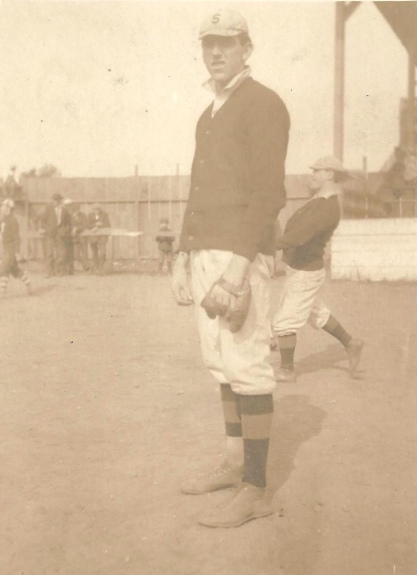 Charlie Schmutz, donning his Seattle High School uniform, warms up prior to a game in 1907. / David Eskenazi Collection

Traveling teen teams are prevalent today, but this Seattle High School squad arranged an unprecedented two-month, 31-game schedule. With "Seattle H.S." stitched across their chests and "1909" upon their backs, they meandered through 10 states and the District of Columbia as they faced challengers of varied skill sets. With the Alaska-Yukon-Pacific Exhibition scheduled for June-October 1909, Seattle business leaders funded the tour as a marketing opportunity for the upcoming event that would publicize the Pacific Northwest's economic viability.

How Smith learned of this tour is unclear, but perhaps he saw the letter Seattle's teenage manager penned to the sporting editor of the Joliet Evening Herald-News. Published in the July 14th issue, Harold Stewart requested games against "some fast amateur or semi-professional team in your city some day during the week of July 21st." Stewart requested a $60 guarantee and 60 percent of the gross receipts.

"These young men were given a hero's send off when they left Seattle on June 14, 1907," said David Eskenazi, a Pacific Northwest sports historian. "[They] remain a celebrated part of Seattle's athletic lore."

"We played at Dwight, which is the headquarters for the Keeley cure for drunkenness," Stewart said, during an interview with the Seattle Post-Intelligencer. He added that numerous clients "turned out to see us play and cheer for us."

Glancing at the final score suggests a competitive game, but Dwight's Star and Herald noted that the home team "lacked the fast, snappy work that won so many games" earlier that year. That afternoon, 16-year-old pitcher Charlie Schmutz puzzled the local squad. Described as "an elongated youth" with "a typical amateur delivery," Thomas S. Rice of The Washington Times noted that Schmutz's pitching could confound players of semipro caliber.

"Schmutz was in fine form," The Seattle Star said, "and but for one bad inning would have had a shutout." He delivered a so-called "wicked spitball" with a "peculiar style" and a "shot-put motion" that stymied the locals for the first seven frames. A scoreless affair after two innings, Seattle then pounced on Dwight's hurler, Jimmie Brown. The Seattleites plated all six of their runs during the middle frames and extended their 6-0 lead into the bottom of the eighth.

"Timely hitting, bunched swats with errors to assist" was how The Seattle Daily Times summarized the action. With a runner on first and two outs in the home half of the eighth, the F.L. Smiths scored all five of their runs to close the gap. Despite the late rally, the youngsters shut down the locals in the ninth to secure the win.

"[The tour] was a bold and unprecedented idea, and a wild success," said Eskenazi. "The remarkable young athletes that comprised the team played a terrific brand of baseball, finishing the tour with a winning record."

Following high school, Schmutz played seven seasons of professional baseball primarily in assorted minor leagues. He enjoyed a brief stint with the National League's Brooklyn Robins (today's Dodgers) in 1914 and 1915. During his playing days, he shared roster spots with two players of local interest. With the Robins, he called Wilmington's George Cutshaw a teammate. As a member of the 1911 Tacoma Tigers, he shared pitching duties with Dwight's Eddie Higgins. 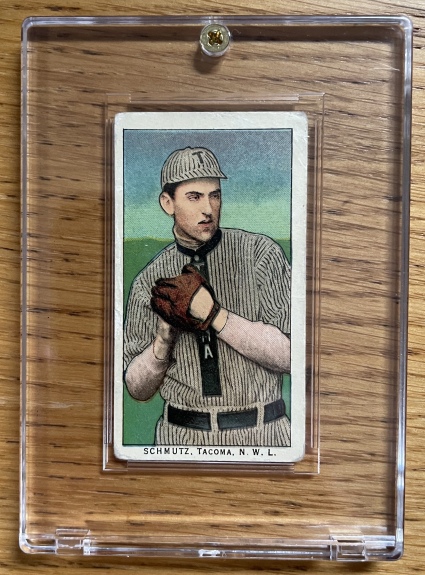 Charlie Schmutz, as a member of the Tacoma Tigers, is featured on an Obak T212 baseball card. / Dwight Historical Society Collection

"That game is not forgotten in Dwight," Dwight Historical Society's Kim Drechsel said. "Our Baseball in Dwight collection includes a Schmutz Obak baseball card. He's depicted as a member of the Northwest League's Tacoma Tigers."

"Visitors can stop by the museum now through November," Dwight Historical Society President Mary Flott said. "The doors are open to the public every second and fourth Saturday from 10 a.m. until 1 p.m. Special appointment times are available, too." 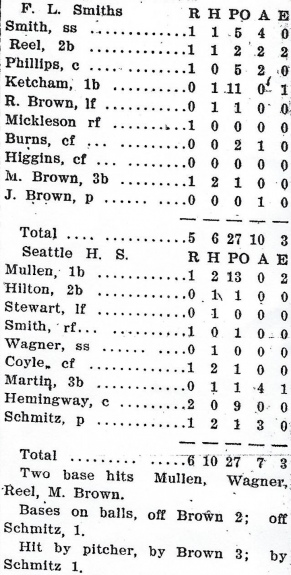 This article originally appeared in the July 27, 2022 issue of Dwight's The Paper. This version includes links and additional images that did not appear in the print version.