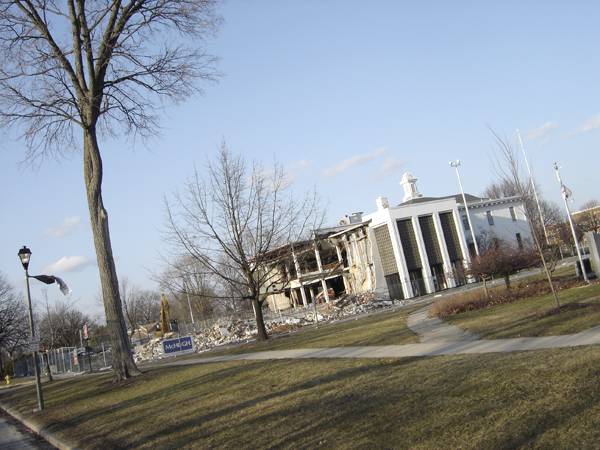 Every community has one, right? Some are simple, like the tale of the crazy old lady's house at the corner of such-and-such streets. Some legends are more complex, like Chicago's Resurrection Mary roaming the late-night streets. Though this blog may seem better suited for Halloween, the site of an Elmhurst haunted legend was recently, in part, demolished.

Last weekend, Elmhurst's Wilder Mansion had a date with a demolition crew. Well, partly. The building, now owned by the Elmhurst Park District, is undergoing renovations. For decades, the mansion served the community as the Elmhurst Public Library. A huge addition built during the 1960s was demolished while the original home remains.

The mansion was built in the late 1860s by Seth Wadhams, the founder of an old Chicago ice company. He died in the late 1880s. Ever since then, rumors of strange occurrences have emerged. Several owners who followed passed on within years of residence. That's easy to write-off, isn't it? Old and wealthy Chicago businessmen buying the home during their 18th hole of life. After the public library seized ownership, the building suffered internal damage from a large fire. That's easy, too. Faulty wiring. Not quite Poltergeist, but good camping story material.

A state-of-the-art library opened at a new location within Wilder Park. Since late 2003, the mansion sat empty. Late night walkers claimed to see lights switch on and off. Staff from the parks department have entered the building for basic maintenance and claimed to feel cool spots upstairs in the oldest portion of the house. Just your typical run-of-the-mill legend.

Then, I had my experience. I worked for the park district for nearly a decade. During September 2005, the park's foundation hosted a fundraising event inside the mansion. Over the weeks leading up to the event, staff would be in and out of the building. Standard event planning trips. The staff decided against using the old elevators for the event. They were too slow and too small. On a routine trip, I was joined with a fellow co-worker. She believed the rumors a bit more than me. Since I had the keys, I knew we were the only two people in the building. As we walked past the elevator, which was not functioning, we heard a loud thud, then the door opened. You can probably still see the tracks we left while sprinting outside.

Any local haunted legends near you?

Bill, I swear we must share a brain...I was goint to post something similar but thought I would check your blog first. lol

Salt Lake had some better haunts...the best one by far in Salt Lake was the Old Children's Hospital which before it was a Children's Hospital, was a pyschiatric ward. Everytime I went there my skin would crawl. We aren't talking just I think there is someone watching me skin crawl. We are talking the full blown I am being followed and that person is up to no good skin crawl. The hospital scene in SLC punk was filmed there, and there were a ton of "accidents" while filming. The building was torn down a couple of years ago and is now a bunch of condos. Personally, I would never live in those condos...The hauntings there go deeper then just the building...

Then there is Memory Grove. South East of the Capitol Building. The legend is as follows:

The ghost of a woman in a wedding gown has been seen by hundreds of people over the years. Legend has it that she was killed just before her own wedding was to take place. There are several different scenario's on how she was killed but her apparition has been seen also in city creek canyon which is north of the grove. Memory grove has always been a site where weddings were a common occurrence.

What's interesting about Memory Grove is that the main points of interest that people visit there forms a pentagram if you connect them on a map.

I have tons of "haunted" stories about that place...

So yeah, I love ghost hunting...*chuckles*

Perhaps I should announce my blog topic for Sunday. Hmmm, let's see. What is a topic I doubt we'll both think of? A-ha! Chicago and the Blizzard of '79: Its impact on the Bilandic re-election campaign! Just kidding, of course.

lol! That was funny!

Perhaps Jane Byrne will find that blog. She'll think it's real funny. That was her golden snow fall. It lead right to her election.