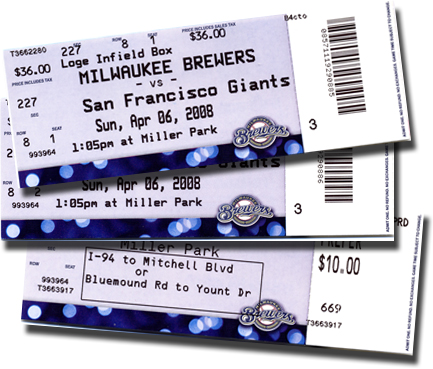 We're heading north to Milwaukee's Miller Park today to catch the San Francisco Giants play the Brewers at 1:05 p.m. This is my first game of the 2008 season, but Susan's second. In fact, this is her second Brewers game, too. She watched the Brewers spoil the Cubs home opener. That was an exciting game to watch, despite the outcome.

The probable starting pitchers for Sunday are Barry Zito (0-1) and Ben Sheets (0-0).

The Brewers defeated the Giants, 7-0. Ben Sheets pitched a complete game shutout. This was his first complete game shutout since his rookie year in 2001. He surrendered only five hits and no walks while striking out eight. Gabe Kapler and Ryan Braun both homered in the fifth inning. Braun, the 2007 NL Rookie of the Year, finished the day 3-for-5 with 3 RBI.

Thanks for posting the standings - that's the first I've checked them out all week. Too bad that the Cubs already have an insurmountable disadvantage. I will say that it was nice to see Wood get a 1-2-3 in the save spot Saturday. I've been so used to the Hawkins/Dempster method of blowing saves that I didn't know quite how to handle the moment.

Wood has two saves and no indication of arm troubles. I'll take it.

Bill, what the heck are doing looking at the standings this early??? Though it is nice to see that the Cubs aren't in last.

Probably to remind me that we aren't in last. So far, so good.

Looks like you caught a great game today! Sheets pitched great... I had a good feeling after seeing him breeze through the 1st inning with 3 strikeouts.