I Was There, But Not For a Game 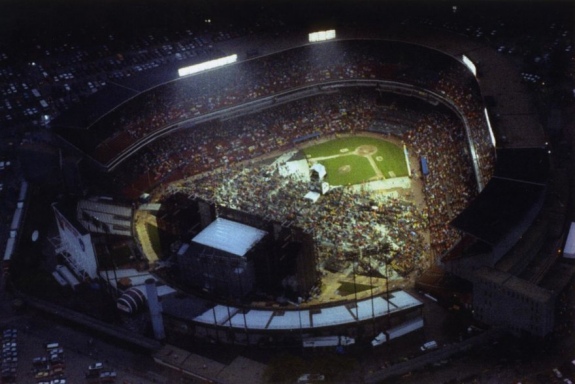 Over the last few days, I've been thinking about all the ballparks I've been to over the years. On Saturday, I'll be able to say that I've attended a game in every Major League Baseball city. With the exception of a few cities with new parks, I can say, "Yeah, I've been there."

Last night, I found a few photos of my travels from yesteryear. I uncovered a few shots of ballparks that have passed on. Specifically, Baltimore's Memorial Stadium and Atlanta's Fulton County Stadium. I never had the chance to see games in either place. I took a non-game day tour of Minneapolis' HHH Metrodome back in 1989, but I was able to return in 2009 to catch one of the Twins' final regular season baseball games played there. That leaves one ballpark that I stepped into without seeing a game.

On June 2, 1993, I stepped into Milwaukee's County Stadium, home of the American League version of the Milwaukee Brewers. That was the former home of the Milwaukee Braves, the and site of three World Series (1957, 1958 and 1982). I found my way to my seat directly behind home plate on this rainy and unusually cold June night. I saw Bernie Brewer's old keg and mug in the outfield, and I spotted a banner for Greg Vaughn, but there wasn't a baseball game that night. I was there to see Paul McCartney play as part of his New World Tour. In all my travels around the Majors, that was the only ballpark that I entered and didn't see a game. And the weather was so bad, the concert was almost canceled.

If you're curious, here was Paul's set from that night:

Drive My Car
Coming Up
Looking For Changes
Another Day
Jet
All My Loving
Let Me Roll It
Peace In The Neighbourhood
Off The Ground
Can't Buy Me Love
Robbie's Bit (Thanks Chet)
Good Rockin' Tonight
We Can Work It Out
I Lost My Little Girl
Ain't No Sunshine
Hope of Deliverance
Michelle
Biker Like An Icon
Here There And Everywhere
Yesterday
My Love
Lady Madonna
C'mon People
Magical Mystery Tour
Let It Be
Live And Let Die
Paperback Writer
Back In The U.S.S.R.
Penny Lane
Sgt. Pepper's Lonely Hearts Club Band
Band On The Run
I Saw Her Standing There
Hey Jude

I cannot claim having been to many ball parks (4) like you have. I think it is special that you have attended a game in every Major League Baseball city, and you have shared your baseball world with us. Thank you. I want to congratulate you ahead of Saturday's game for completing your goal. I think that is so neat. I will have to write a blog sometime about a couple autographs I got back in the 1950s in St. Louis. One was from a "Hall of Famer"! Do you remember what the stadium's name was in St. Louis before Busch bought the Cardinals? Both the Cardinals and the Browns played their games there. That's where I got the autographs, so they are pretty old.

Was it Sportman's Park? I'd love to hear those stories about autographs.

It was Sportsman's Park! On my first trip to the park I remember seeing a factory across the street! In my mind I can still see the sign on the building that read "Nuts & Bolts." Now why would a young fellow's memory of a first trip to a ball park be of a factory across the street?? I saw some great players in that park - Stan Musial, Ralph Kiner, Willie Mays, Ernie Banks, Hank Sauer come to mind. I am sure there were many more. In two different years I saw Willie Mays hit two homers in each game. The Say Hey Kid was one of my favorite players!

That's awesome that you'll be able to say a game in every major league city! It makes me think of my grandfather and how he would have loved to complete such a goal!

Stheinz, that's a great story. Do you know how old you were when you first visited the park? My first memory of Wrigley Field was looking at the scoreboard. I don't recall much of that game, or the ivy on the wall, but I remember the scoreboard. It seemed so large.

Amber, was your grandfather a fan of any particular team? My grandfather loved the White Sox, but I think my grandmother had a serious say in that decision. As far as I know, they only attended games at Wrigley Field and Comiskey Park. They traveled with their church group to Toronto's old Exhibition Stadium to see the White Sox play the Blue Jays back in the mid 1980s.

I have been to the Metrodome in Minneapolis before and that was the one time I have been to a ballpark and not seen a game. My sisters and I sat down in the outfield to watch batting practice before the game and a ball hit my sister square on the head. We spent the rest of the night in the medic station and the ER.