Related Content
The Eve of a Championship?
A Rekindled Relationship
My Most Significant Sporting Event

Almost Half a Century Later 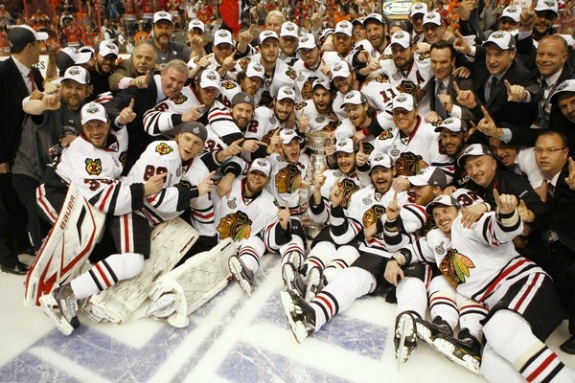 Last night, the Chicago Blackhawks won their first Stanley Cup since the Kennedy administration. It was the 1960-1961 season to be exact. Lately, the focus of my blog has shifted from Cubs baseball to the Blackhawks. I've shared a few stories and some photos about the team. But, the game last night couldn't have ended in a more bizarre fashion.

During Game 6 in Philadelphia, the Blackhawks held a 3-2 lead late into the third and final period of regulation. With a few minutes left, the Flyers were able to slip a game-tying goal by Antti Niemi. Ultimately, the game was forced into a sudden death overtime. The first team to score would win. If the Flyers scored, Game 7 would be played on Friday in Chicago. If the Blackhawks scored, they are the Stanley Cup champions.

With the score tied 3-3 in overtime, Patrick Kane fired the puck from the left side of the goal. No lights to signify a goal. The announcers were silent. There was no crowd reaction pro or con. Nothing. Susan and I just sat there watching the television. The camera found Patrick Kane throwing off his gloves in celebration skating toward the Blackhawks goalie, Niemi. Niemi was still in his ready position. Besides Kane, nobody knew what happened. Next, the Blackhawks emptied their bench and began to celebrate on the ice.

Everything happened so quickly. What in reality was only a few seconds felt like an eternity. It was like a batter belting a home run, but nobody saw it happen. Very bizarre, but a clean goal.

After the game ended, I received a text from an old friend. It read:

My Dad and I took him to his first Blackhawks game at the old Chicago Stadium.

What a night. What a season.

Photo Courtesy of the Chicago Tribune.

Such a great game. I loved, too, how we won it OT...that it was a winner takes all scenario. One goal--truly.

The greatest part of the night for me was just seeing how excited my husband was. He's been playing hockey since he was 6 and has been a Hawks fan his whole life. He was almost as excited as Kane was when he scored the winning goal!

such a sweet shot. kane's childhood dream literally came true last night. very few people get to experience that. wonder how many babies will be born in chicago named kane this year?

Dave Rock   Thursday, June 10, 2010
There is no other feeling like when your local team wins The Stanley Cup. In 2006 when the Hurricanes won the cup the entire state of North Carolina went wild. My wife, who is not much of a sports fan because I make up for her, became an intense watcher of the Stanley Cup Finals.

It's a great feeling, but I still want to see the Cubs win the World Series. That would mean infinitely more to me. That's my true team.