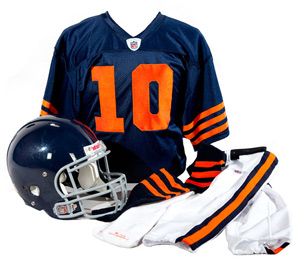 Last year, I posted a blog about retro uniforms in professional sports. During the 2009 NFL season, the teams that formerly played in the American Football League (AFL) prior to the NFL-AFL merger wore throwback uniforms for select games to celebrate the 50th anniversary of the AFL. During the 2010 season, the Chicago Bears will don 1940s throwbacks for two games to celebrate the franchise's 90th anniversary.

The Chicago Bears were among the charter teams when the NFL was founded by team owner, George S. Halas, in 1920. These uniforms are throwbacks to the 1940s when the Bears dominated football. During that era, the Bears earned the moniker "Monsters of the Midway" when they won football championships (1940, 1941, 1943 and 1946).

The Bears will wear these uniforms on Monday, September 27 against the Green Bay Packers, and again on Sunday, November 14 against the Minnesota Vikings. Both teams are NFC North Division rivals.