And That Makes Five

Oddly enough, I waited until the waning moments of 2010 to accomplish something. I can't even blame this one on procrastination. Believe it or not, but it didn't dawn on me until about three weeks ago. I've taken 37 spins around the sun, and in that time, I've managed to visit every Major League Baseball city. Some of them multiple times. But this accomplishment is much more local. Growing up in the greater Chicago metropolitan area, it's difficult to fathom that I haven't done this before. Tonight, we are going to the United Center to see the Chicago Blackhawks play the San Jose Sharks.

So what's the big deal?

A few weeks ago, it dawned on me that I've never seen all five of Chicago's major sports team play during one calendar year. In 2010, I've been to multiple Cubs games. That's not a big surprise. I waited until the final game of the year, but I watched the White Sox close out the season at home against the Cleveland Indians. At a golf outing in late September, I won tickets to see the Bulls play the New York Knicks at the United Center in early November. Susan and I took our nephew to see the Bears play the Philadelphia Eagles in late November. But I realized that I haven't seen the Blackhawks play this season.

Tonight, that changes. I'll just pat myself on the back for completing a goal I wasn't aware I never achieved. And I should thank Susan for the tickets. Oh yeah, and the nice Blackhawks shirt she bought me for Christmas, too. 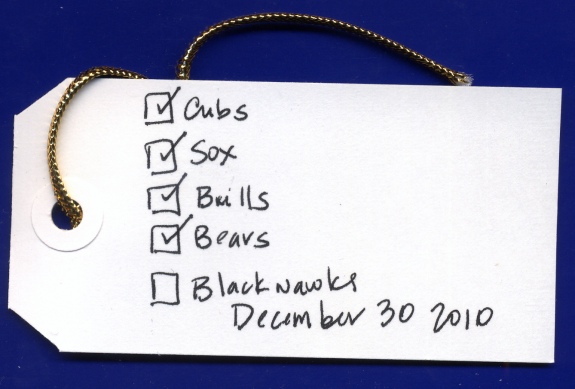 Even though it wasn't a goal you had set at the beginning of 2010 it nevertheless is a sport worthy accomplishment! Congratulations.

After having seen my first NFL game in October, I am really hooked on the NFL level of Hockey. Bill, I am like you until October, I had had season football tickets at NCSU for 35 years, and had been to numerous basketball games both at RBC Center and Reynolds Coliseum, and had seen Minor League Hockey because Raleigh at one time had a team named the IceCaps; however, until October I had never witnessed a live NFL Game.

Just to clarify, I've seen a number of Blackhawks games live. Some at the old Chicago Stadium and some at United Center. For some reason, I just haven't seen all five of Chicago's major sports teams play within the same calendar year. It's taken 37 years to correct.

Have a good time, Bill! Hope the game ends better for you than it did for us. I'm sure being on the home ice will help!

They lost 5-3. They made a game of it at the end of the second. Just couldn't score in the third.