Back to United Center

It seems like we just wrapped up the Christmas adventures our niece and nephews drew back in December 2009. Well, that's because we did. Back in late November, we completed our year of adventures with a trip to the Adler Planetarium with our nephew, Eddie. Just a few weeks ago, the selection he drew on Christmas Eve 2010 was a Chicago Bulls game at United Center.

Due to the adventures selected, some have time limitations. These are primarily the sporting events. Baseball games need to wait until the summer. Football is in the fall and winter (and is extremely expensive). Basketball and hockey seem to overlap, but during the summer, they don't play. Since the number of games the Bulls and Blackhawks play are far fewer than the Cubs and Sox, we figured we should grab tickets for one of these so we don't have a rush before next Christmas.

Tonight, the Bulls will play host to the Boston Celtics. Though I must confess to not being the biggest basketball fan around, this should be an exciting game. Both teams find themselves atop their respective divisions. The Bulls are 23-12 and have an eight game lead over the Indiana Pacers in the Eastern Conference's Central Division. The Celtics are 28-7 and the New York Knicks by seven games in the Eastern Conference's Atlantic Division.

It'll be refreshing to have crossed off to the list eight days into the new year. Our nephew who waited the longest last year, he will be first in 2011. 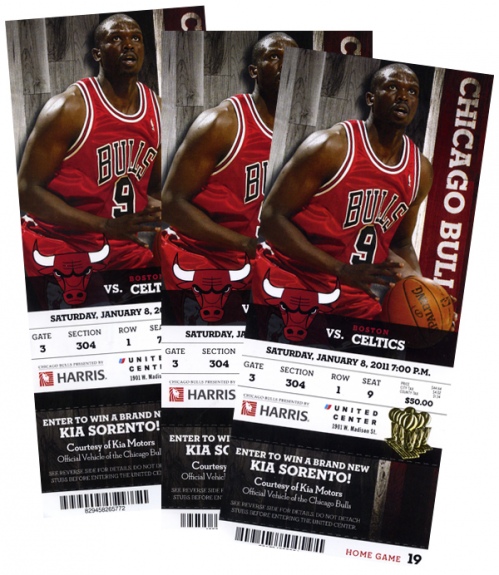 You are a special uncle!

It's always a good time. Thanks!

Should be a great time. What a great gift. I will definitely keep this in mind in the future.