Change is Coming to Wrigley Field

When the Cubs added the Toyota sign above the left field bleachers a few seasons ago, some fans acted as if someone painted a mustache on the Mona Lisa. Back in the late-80s, some fans cried that lights should never been installed at Wrigley Field. At the Cubs Convention today, management announced that a new patio deck will be added in the right field bleachers. Along with the new patio deck, a 75-foot LED board will be installed above the ivy-covered outfield wall. While only a simple drawing was made public, I am sure this will ignite debate between the purists and those who want a World Series winner on the north side. If you don't already know, I am in the latter. 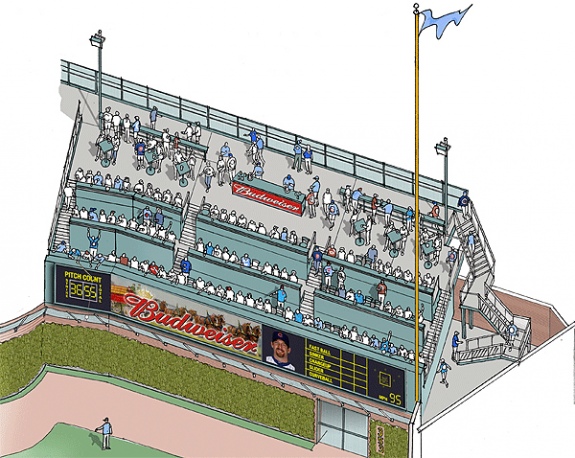 I'm not trying to be a spoilsport, but it doesn't look handicapped accessible. Isn't that illegal? Maybe there's an elevator I can't see.

That's a great question. I'll assume that it must be ADA-accessible, but that doesn't really come across in this rendering. As far as I can tell, this is the only image available. We'll see.

I think you must be right. They wouldn't be allowed to build anything today that wasn't ADA-accessible. My brother-in-law is handicapped and we have traveled extensively with him and his wife, so I am acutely aware of these issues!

I think it is a great idea. The Cubs are really trying to make the Wrigley experience better this year and I applaud them for that. Although they have many sell out games due to season ticket holders, actual attendance was way down last year. I only went to 2 games and usually hit between 10-15. I know many people in the same situation. I must admit that although my expectations are low, I am looking forward to going to the Friendly Confines.

You're absolutely correct about attendance in 2011 being down. Here's a photo from Memorial Day. http://goo.gl/vCxmX

Obama, The Bears, and The Cubs, they are Chicago experiences; however, no one can say if either one of them is anything great, but they are still not as bad as Al Capone and Richard Daley.

No shot at the White Sox, Bulls or Blackhawks? If you mentioned Mrs. O'Leary's cow, I think you would have covered Chicago's entire history in one comment.