A Tough Road Ahead 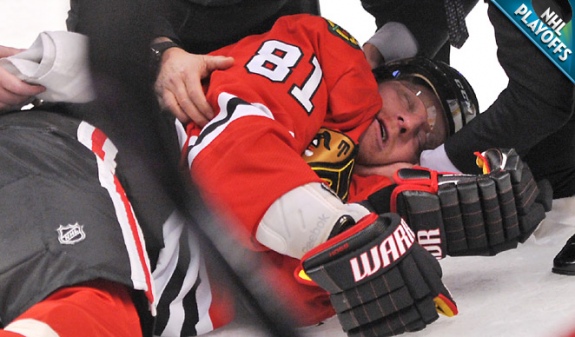 What's the old expression? We attended a boxing match and a hockey game broke out. After three games, that's what has become of the Chicago Blackhawks' first round playoff series against the Phoenix Coyotes. With three games in the books, the Blackhawks find themselves down two games to one. Not only that, they are fortunate they didn't lose Marian Hossa for the remainder of their Stanley Cup run.

Normally, NHL players ditch their hockey code and play clean during the playoffs. Even they realize that pointless fighting results in penalties and potential injuries. Last night during the first period, Raffi Torres, a forward from Phoenix, left his skates and a threw a shoulder directly into Hossa's head sending him to the ice. Ugly scene. Torres has been suspended indefinitely until his hearing on Friday. A longer penalty may be enforced following that hearing.

The Blackhawks will be without Hossa for Game 4 on Thursday night in Chicago. Chicago will be playing without one of their elite players. The remainder of the series may be difficult for the Blackhawks to regain the series lead.

We've been watching a lot of games here (my husband being the huge hockey fan that he is will watch any game that's on TV, even high school!) I've been shocked by the amount of fights, because like you said, usually they play clean during the playoffs. I'm still mad that Weber didn't get a suspension after pounding Zetterberg's head into the glass after the final buzzer. And the Pens/Flyers series has gotten out of control a couple of times!

The playoffs have been unusually violent this season.

I always take alot of heat from hockey fans for saying this, but I think it's stupid that refs allow players to fight. I couldn't imagine if other sports did this. Although, it might be fun to watch it happen in a non-contact sport like bowling. Not trying to be a jerk, but is it because hockey needs the fans and that's what the fans want to see?

Hockey is still regardless of when it is being played because there is no genteel way to play the game. By nature Hockey is a violent contact sport just like football and basketball because in order to win, a team has to advance an object through a group or a team of individuals towards a goal and scoring as a result. Baseball tends not to be as violent because of the lack of contact.

I agree. I don't understand why refs allow as much fighting as they do. I did see punches thrown on a golf course once. I'll admit that was hysterical.

Just like NASCAR, hockey specatators pay to see the Blood and Guts while they enjoy their Beer. For the price of the tickets I think the fans believe it is their right to see violence and maming. By the way, the Carolina Hurricanes have announced their ticket prices for 2012-2013 and the tickets in the Lower Bowl (Lower Level) and the price per seat for the season is $6,300.