Related Content
Yeah, the Bulls are Done
Bulls Clinch the Top Spot in the East
Back to United Center 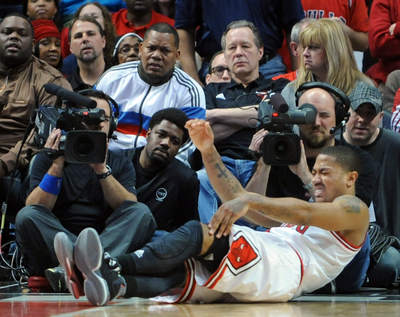 On Wednesday, I posted a blog about basketball. In that text, I mentioned that I rarely discuss basketball in the form of blogs. Sure, I watch games on television throughout the NBA season, but it's not my passion. Since the Chicago Blackhawks were eliminated in the first round of the NHL playoffs, I was relieved that I could switch my attention to the Chicago Bulls. By locking up the top seed in the Eastern Conference, they were primed for a quest for a seventh NBA title.

This afternoon, the Bulls pounded the Philadelphia 76ers 103-91. They grabbed an early one-game-to-none series lead. Unfortunately, they also lost.

What? Win and lose?

With 1:20 left to play in the game, Derrick Rose tore his ACL. His season is over. So is any hope of a championship run by the Bulls. Will I watch the remainder of the playoffs? Sure. Do they stand a chance? Perhaps against Philadelphia, but nothing more than that.

This is my last basketball blog for quite some time.