Comiskey Park: Gone, But Not Forgotten 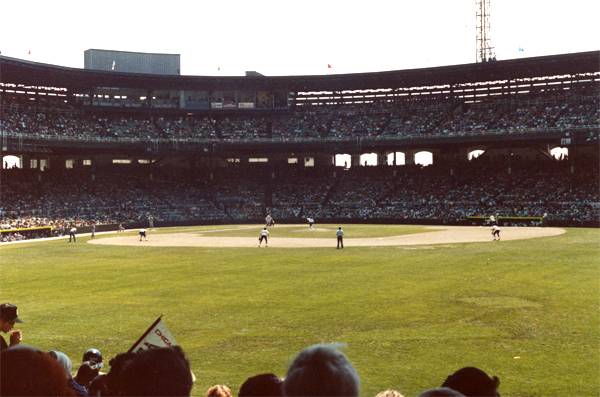 A number of White Sox fans get defensive when they hear people refer to their ballpark as U.S. Cellular Field, or simply, "The Cell." They bark back with, "It'll be a cold day in hell before I call it that corporate name. It's still Comiskey Park." Sure, the ballpark was originally called Comiskey Park, or Comiskey Park II, when it opened its doors in 1991.

When Biker Ben mentioned his trip to watch the White Sox, he forced me to walk down memory lane. He asked about the colored pinwheels atop the scoreboard, then the memories came flooding back. As far as I'm concerned, Comiskey Park stood on the other side of 35th and Shields. Yes, it's a parking lot with a weak memorial to "The Baseball Palace of the World." That was Comiskey Park. 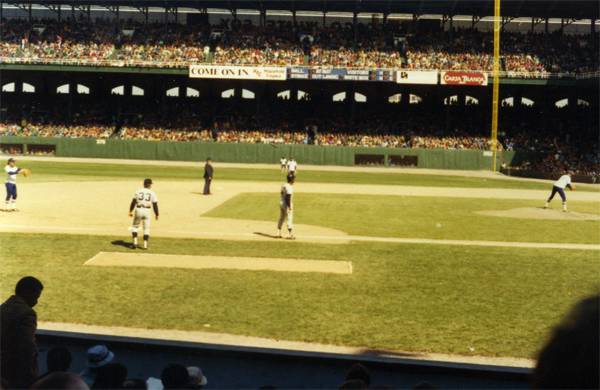 I grew up a Chicago Cubs fan, but I spent ample time on the south side. My grandparents, aunts, uncles, and cousins tried their best to convert me. Their best efforts failed. The closest ever was when my Grandmother bought me a "Winnin' Ugly" shirt in honor of the 1983 American League West Champion White Sox t-shirt.

In 1990, I attended the final opening day at old Comiskey Park. They played the Milwaukee Brewers, back when they were still in the American League. I was glad that I could be a part of Chicago history. I did have tickets to see the Cubs opener that evening.

Even though Wrigley Field was ballpark as a kid, Comiskey Park was different. I loved the exploding scoreboard. In fact, when Bill Veeck installed the exploding scoreboard in 1960, it was the first of a kind. Now, it's commonplace. I remember when the Sox added the jumbo screen in the early 1980s. I remember going crazy with my friends when we first witnessed ourselves on the screen. Comiskey Park even had the shower head out in the outfield. The White Sox even had mascots, bad ones, but that was different than the Cubs. I'm not sure what they were, but they were Ribbie and Roobarb. 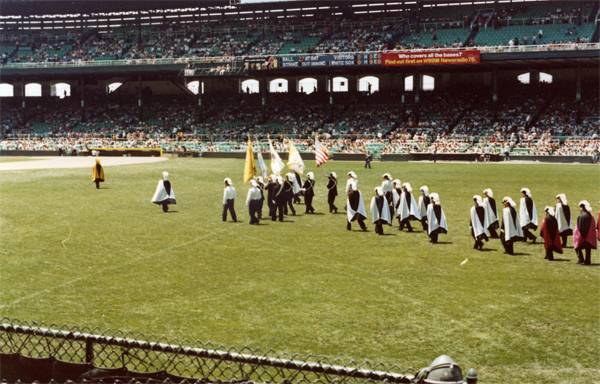 I never had the chance to take photos at the old place. I found a few at my parent's house, but that's it. Nothing too exciting either. Somewhere, my family has old black-and-white photos from games in the 1950s. I'd love to get my hands on those. If anyone has old photos from Comiskey Park that they would like to share, I'd love to add them to an album. Photo credits will be given. You'll get bonus credits for photos from Disco Demolition Night, or from when The Police played there.

Here's a site that looks back at the old place.

Any memories of the old place? I know there are White Sox fans out there.

One of my favorite memories of Comiskey Park happened in 1988. My high school planned a trip to see the White Sox play the Red Sox during July. It turned out to be a doubleheader. Excellent! Nine extra innings of baseball. Nobody attended the first game, so I told my friends to move down to the first row in the old "Golden Box" seats. One of the security guards approached me and asked us to move. I told him there's nobody here. He agreed and told us we had to return to our seats for game two.

Fast forward to game two. I managed to get our first row seats back. Daryl Boston steps into the on-deck circle to pinch hit. I have no idea why, but I yelled out, "Boston, you suck!" He turned and looked at me. Next, he stepped to the plate and pounded the ball over the right field wall. The scoreboard lit up and the fireworks ignited. He crosses the plate and headed back to the dugout. He pointed at me and asked, "Do I still suck?" I gave him a small salute.