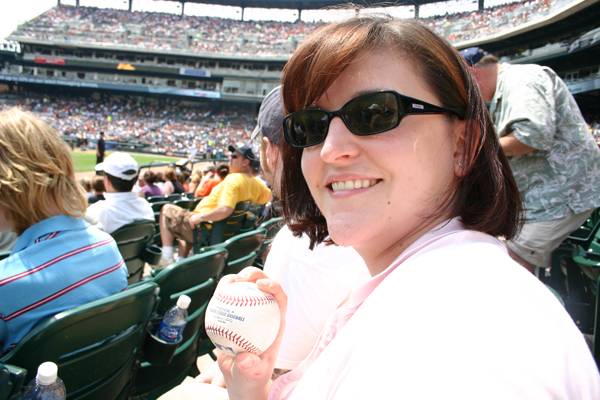 I have been attending Major League Baseball games, primarily at Wrigley Field, since the late 1970s. My seats have been near the back of the upper deck, club box seats right behind the dugouts, and out in the bleachers. I've even had excellent seats in other parks. During these games, I've had foul balls scream past me, and home runs land just out of reach. Susan snagged two in the last two seasons.

On Thursday during the White Sox/Tigers game at Comerica Park in Detroit, one of the White Sox popped out to left field to end the inning. All of the fans along the third base side rose to their feet and screamed for the ball. The left fielder tossed it over to Curtis Granderson, the center fielder. As he returned to the dugout, he flipped the ball into the crowd. I know I was close, but I had the camera in my hands. As I turned, sure enough, Susan caught it. She had a slight wrestling match with the fan to her right, but she walked away with the ball.

Last season, she had a similar situation at the then-named Jacob's Field in Cleveland. Back in early April, I shared the story of my first ball at a Minor League game in Florida. 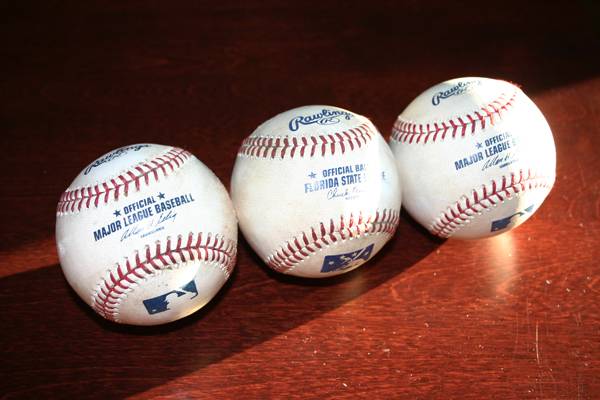 I'm jealous. I have NEVER caught a foul ball at a Major League game. Way to go Susan!!!!

My Dad got hit with a Red Wings hockey puck many years ago. He still has the puck to prove it. Luckily, he was ok.

We had about 30 foul balls come our way on Sunday at Busch Stadium. I've never gotten one either :(

Somehow I never read that blog about your FSL ball. I used to work for the Daytona Cubs, and I dated a guy who worked at Roger Dean stadium. Crazy!

My sister has gotten hit, not once but twice with a ball while sitting the Metrodome, home of the Twins. Once was on the knee and the second time was on the head, she had to be taken to the emergency room for that one, I was there. Catching a baseball at a major league game: priceless
Getting hit twice in the same stadium: unbelievable.

K8Day, I certainly hope she doesn't go for the hat trick.