Fifty-one years ago this Sunday, June 29, will mark my parents' 51st wedding anniversary.

It was 1957 and my Dad was in the army, stationed in Orleans, France. Both were 23 years old and had been together for 7 years at that point, engaged for 2. The deployment overseas was a shock and surprise to both of them and had my Dad remained state-side they would have probably married much sooner. They wrote to each other almost daily and somewhere in those letters an idea took form--why wait until he was discharged from the army...why not just get married in France? All of the wedding plans were laid out in their letters to one another and they chose the 29th of June as their wedding date.

My mom scurried around her hometown of Dearborn, MI finding a dress and making her travel arrangements. She finally left for France, flying for only the second time (and the first time by herself), arriving on June 19 as French law required their intent to marry be placed on public record for 10 days prior to the ceremonies.

On the 29th, my parents went to the first of their two ceremonies at the city hall. When they arrived they discovered one of the many stamps they needed to be legally wed was missing so off they went to fix that problem. They returned to the Hotel de Ville just in time to see the mayor riding off on his bicycle, white wig and robes flowing behind him. My mom began to cry, as the church ceremony could not go on until the civil ceremony had been completed. My Dad's quick thinking friends assisted him in reaching the police, who contacted the mayor, who rode back into the center of town to perform the ceremony.

The church ceremony was performed later that afternoon, performed by the base's army chaplain. The reception was held at the golf club (my Dad was the golf pro) and unfortunately the few photographs that were taken did not turn out so well. In 1996 I was fortunate enough to travel to Paris and then Orleans with my parents to see the Hotel de Ville and church where their ceremonies took place. The golf club was long gone at that point, but my Dad did chat with a few older men in town who remembered those days.

Last year we celebrated their 50th at the beach. The whole evening was a complete surprise to them, orchestrated by me and my sister (with some input from my brother) and it went off without a hitch (though the weather could have been better). We had spent the previous 2 nights creating a collage with photos and pictures from magazines that reminded us of them. I had written a letter to friends and family asking that they send pictures and notes to my home that would be put into a keepsake box for them to look through and "reminisce" (quotes because only my Dad is able to remember "the good old days") at their leisure. I also hired an airplane to fly by our beach house with a sign wishing them a happy anniversary. It really was a magical evening, though bittersweet too as I'm sure my Dad (nor my Mom) envisioned that my Mom would be in the later stages of Alzheimer's when they dreamed of their 50th all those years ago. 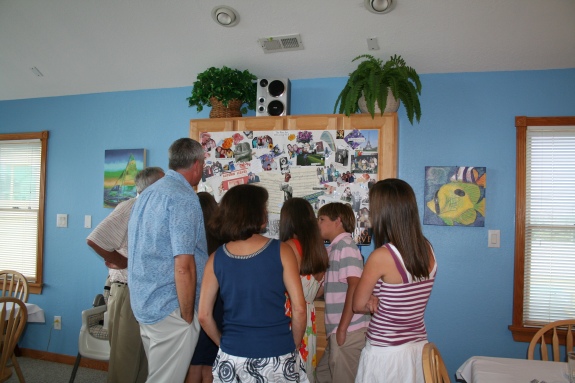 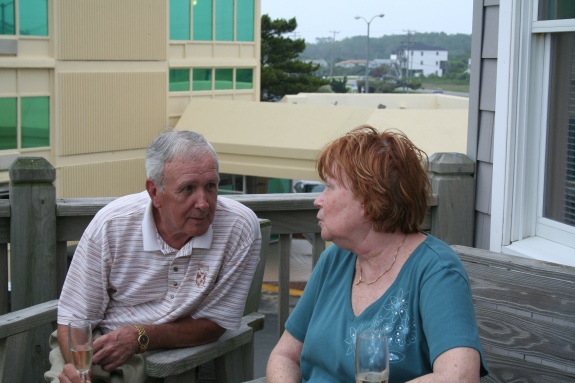 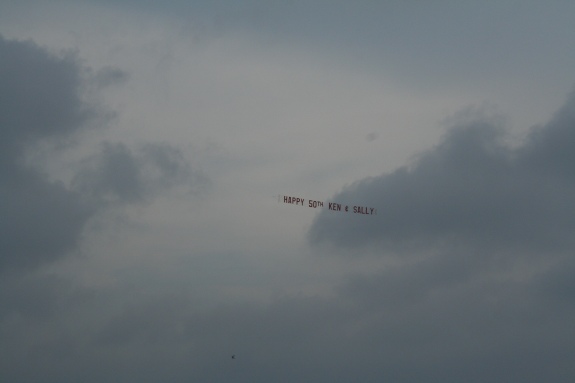 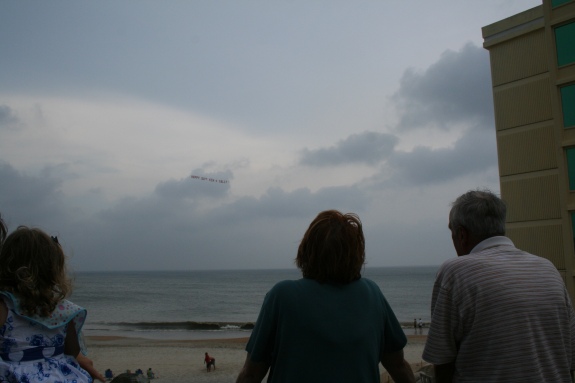 So another year has passed and my Dad remains as devoted to my Mom as he always has been. She was his one true love, and he was hers. The state of her health obviously makes the anniversaries a little more difficult for my Dad to bear, but it's heartwarming and beautiful for me to see the tenderness in his eyes when he looks at her and to just try to fathom sharing a love that strong for so many years.

Happy 51st Mom and Dad. Your marriage and love for one another serves as an amazing testament to the power of love, and is something I strive for in my own marriage every day.

How very sweet. It made me cry and I don't do that often. But I am mad at my husband right now and ktkat has tried telling me to look for the good things. This story reminds me of how blessed I am because my husband would be like your dad and still looking at me with love even if I didn't know who he was.

Great blog. And a great story. You are lucky to have both parents still and see this kind of relationship and love. I know it must be hard to see your mother like that and frustrating that her memory is gone and you can't share those memories but it's good you still have her with you and share that love. Thanks for sharing.

What a lovely tribute to your parents.

I love that story!!! What an awesome one for you to pass on to your kids, too!