I mentioned in a blurb that I had had some signs after my Dad's death. I know some of you will believe there are logical explanations for each one...and I'm sure there are. But they've brought me comfort, so I'm going to go on believing that Pops was with us.

1. My parents' house sits adjacent to a field. They live on the corner of a dirt road and a very busy 4 lane 45 MPH street in suburban Detroit. Several years ago, deer began to show up in their yard. Once in awhile I was lucky enough to see a few when I was visiting, but lately, maybe for the past 2-3 years, I didn't see any at all. Each time I went home, I'd say to Pops "I hope I see a deer this time." The last few times, once we were back in Northbrook, just a couple hours after arriving home, Pops would call to say "you're never going to believe it but there are 3 (4,5 however many deer) in the backyard right now.

After his funeral service on Wednesday, we went to his favorite bar/restaurant, and then went back to the house. It was evening--maybe 7 or so? I looked out back and there were 2 fawns eating the day lilies in the garden, maybe 25 yards from where I stood. A few minutes later, another fawn and the doe came out of the field to join them. The first thought that popped into my mind was "Ken, Laura, Julie and mom." The next thought was "Pops sent them."

2. The next day, Ken and his family stopped at the house before leaving for the airport. Paige, my oldest niece, wanted to look through Grandpa's "junk" drawer in his dresser, to see if there was anything there that spoke to her, to take as a remembrance. While we were looking, I found a watch that he probably hasn't worn for at least 5 years, maybe longer. It reminded me of him, though, so I put it on.

Later in the day, I looked at the watch--specifically at the time it had stopped. 3:10. Exactly when he had his heart attack and for all intents and purposes, died (his death certificate gives the time of death as 4 something, which is when it was called at the hospital...but he is listed as DOA. Laura called 911 at 3:10, seconds after she heard him gasping for breath...she was on the couch next to his chair.)

3. This is where it gets kind of spooky. I went out to the garage around 9:30 on Thursday night. It was already dark, so I flipped the switch. There are 3 sets of flourescent lights. When I flipped the switch, they didn't turn on, but they glowed. The light in the middle was slightly flickering--but flickering is the wrong word...it looked more like it was beating. But not like a healthy heart--it was very slow, soft beating...like a heart that was failing.

I turned off the switch once, then put it back on and the same thing happened.

I was a little freaked out, so I went inside to get my sister and Charlie. They went over and Charlie tried the switch too, he thought I was messing with him. The same thing happened. Laura pulled me into the garage and we just both knew he was there. We made Charlie leave because he kept questioning it and trying to be the voice of reason, but we didn't want to break the spell, we just wanted to be with my Dad.

We sat for a few minutes, and I said to Laura, "will you go get my camera?" She was maybe 6 feet inside the house when 2 sets of lights turned on, it was very bright all of a sudden. She came right back in and said. "that's not a good idea" and I said "he doesn't want us to take a picture."

Laura went to the other light switch in the garage (not the one I originally had tried) and turned it off, then on. One light turned on...the one closest to the door.

She turned it off and again, and then on. 2 lights went on...the two on the outside. The middle light, the one with the beating heart, stayed off.

So we asked a question...did you find Grandpa Roach (my Mom's dad--they were very close until he passed away in 1958)? Because my mom picked up my dad's shoes, the ones he wore every day (green and white saddle shoes) and walked up to her caregiver, Linda, (this was on Tues when we were at the visitation), and said "he's looking for my Dad". We said 1 for yes, 2 for no, 3 for still looking.

Only one light turned on.

We asked if he had found his mom. And then Charlie walked in and he still didn't really believe us, or maybe he just thought we were trying to mess with him, so we finally got calmed down and asked it again. All 3 lights went on.

Charlie went back into the house and we got quiet again and asked if he had found Grammy Roach. All 3 lights turned on. Then we tested it again, no questions, and all 3 lights came on, so the spell was totally broken.

Later that night, Laura asked me if I noticed the light down in the basement. We have 3 sets of lights down there, and one of them won't turn off. Doesn't matter what switch you use, it won't go off. Pops turned it on on Saturday afternoon.

4. My Dad was a pretty active member of the golf collector's society, and they were to have their big national annual meeting here in Detroit this fall (Sept). He and Laura were discussing hosting a party at the house, so he could share his collection with the members he had grown close to, but never met.

I went out to the garage, and 2 sets of lights were on, the 3rd appeared to be burned out.

Laura and Charlie came out there, and we were talking about how he had been writing a new golf book and Laura started talking about how they were going to have this party, and there was a reason the annual meeting was to take place in Detroit this year. She said "maybe we should still have the party" and just then the light that I thought was burned out, turned on. Laura said "looks like Pops wants us to" 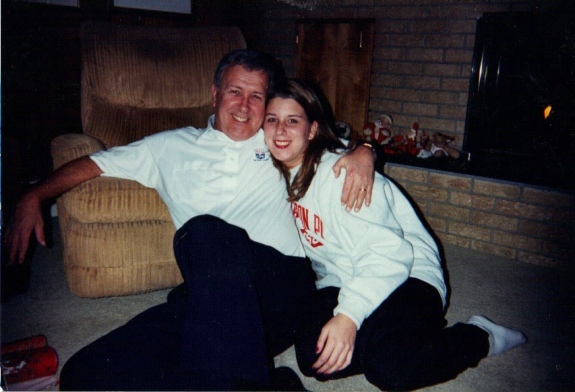 Certainly a lot to think about. Thanks for sharing your experiences.

I am sure that your Dad will continue to be with you through the years. His love for you is obviously very strong.

Love is stronger than death and there's obviously plenty of love all around!

Thanks for sharing this, Jules. Times like that definitely help give you comfort when it's needed. I just love reading stories like these.