A stack of photos and somehow you wish they could speak. You look at the pictures, compare faces, look for clues and still there's not much to add. 20 years ago I would look through large maps of Slovakia trying to find the tiny town. Today it's easy to locate Velky Lipnik, but still the old photos don't speak and you look for little clues to give you the rest of the story.

My grandmother, Maria Nagrant was born August 24, Velky Lipnik, Slovakia 1907. Her parents, Anna Kuzmiak Nagrant (1888) and Vasilij Nagrant (1879) had immigrated to Chicago Illinois before she was born but Vasilij had to return to Velky Lipnik to settle an estate or deal with family business. He got sick and Anna followed him back to Slovakia. The birth certificate gives us so little information. Maria was baptized in the Greek Catholic Church. 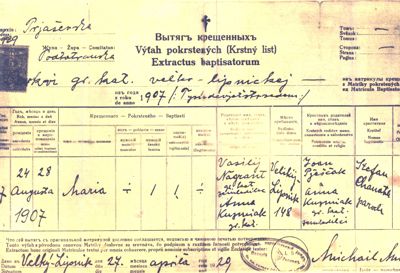 The only photo of Vasilij is in the wedding photo of Anna's brother. (He's third from the left) 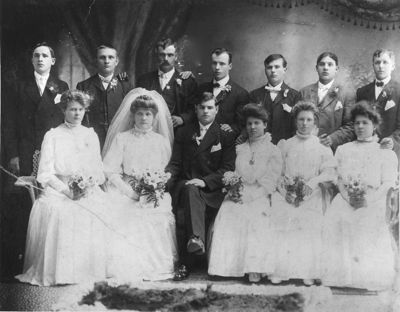 This is the first picture of Maria Nagrant. 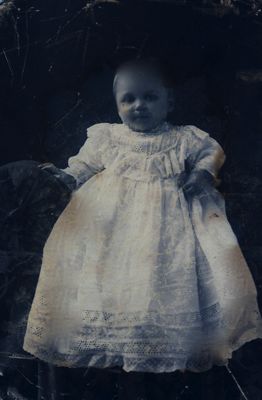 Maria and her mother Anna returned to Chicago about 1909. Gram thought she arrived in the US on July 12, 1909 at the port of New York. She never found proof of that and eventually officially became a citizen in the 1960's.

Anna Nagrant and little Maria were photographed with her little cousin. 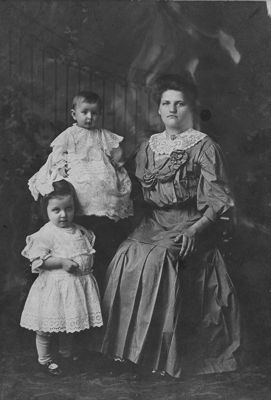 There were several cousins from Indiana. This is Maria Nagrant with her cousin Marg. 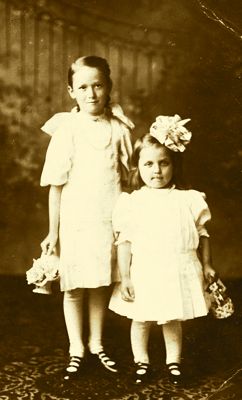 Her mother remarried when Maria was about 4. We don't know more. We think his last name was Peshke. 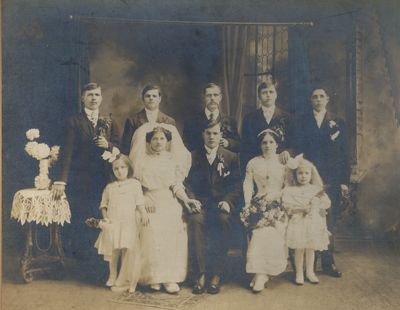 There is one photo of her baby sister with her step-father and his family. The baby sister died shortly after this. 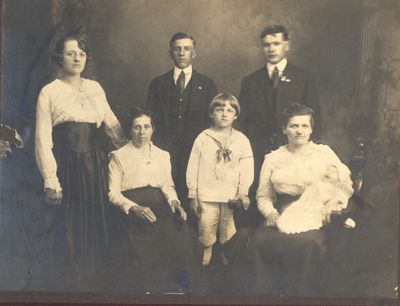 When Maria was 12 she attended the wedding of her cousin Mary. 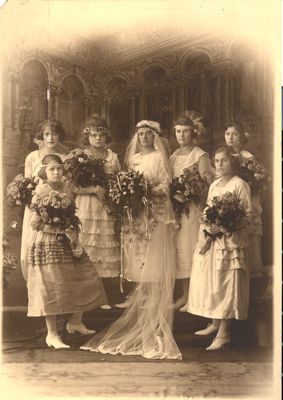 1919, this is the last photo we have of Anna. She died in 1920 leaving my grandmother, Maria, mostly alone in Chicago at the age of 13. She married my grandfather, Joseph Boksa, in January of 1928. (that will have to be another chapter!) 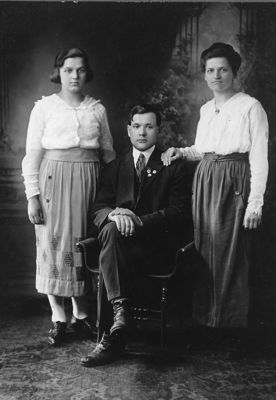 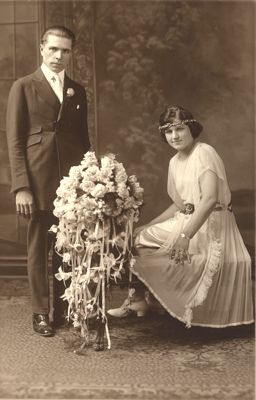 Amazing photos. I know you are happy you have these to see the family and keep them in your mind's eye with the photos.

This is so interesting, Karen, and I can appreciate the time and effort that go into trying to figure out old family photos. I've tried to do a lot of that myself. Everyone's gone so there's no one who can answer my questions. You just have to try to be a good detective and figure out people and places from the pictures and old papers that you have.....and luckily today there are several internet sites to help. It's very challenging and very interesting too.

Wow Karen... This is amazing!! I really enjoyed this & am sending the link to Ben hoping he views it soon. Thank you :) This is just truly amazing... Gives me a new window into the Thompson history!! ...wow...

Fantastic. I have been studying my genealogy on and off for years and I have hardly any old pictures, and those I do have seem to have only the brothers or sisters of direct ancestors. What a wonderful resource to flesh out the research.

The big advantage I do have in my research is that I have yet to come across any ancestor that has any record originating outside the Southern part of England. Therefore all the records are in English!

girlcarew   Friday, January 22, 2010
Beautiful pictures,My mother Martha Lichvar ,was born in Velky Lipnik, 1902 . I did make the trip to Velky Lipnik, after my mom died.and was blessed to visit with some of her nieces and nephew.From what I know,my grandfather, worked in the forestry division..My father William Charnota,was born in Velky Lipnik came to Chicago,married,had 4 children was widowed and married my mother, Martha,she was blessed with 6 children as of today their are two of us left ,my brother Tony and myself..God Bless You and your family..

Mary Berzinis   Tuesday, February 18, 2014
Hi Karen. Was doing a little family digging and came across this site/post. My grandmother was from or had relatives in the town of Velky Lipnik as week. And reading through you post.. there is a person named "Anna Kuzmiak Nagrant". My grandmother's last name was Kuzmiak. Will inquire w/ my 89 y/o mom tomorrow.

Would love to hear more. We visited Velky Lipnik last year. My grandmother's mother was a Kuzmiak.

Karen   Wednesday, August 6, 2014
This is so interesting. I have been trying to locate my G.P.'s information. They came over in 1905 with Anna, their 3 yrs old. For the past couple yrs can't seem to get anywhere. I have two cousin's that are Priests in Ill. Their names are Arch Joseph Lickwar and F. Vasily Lickwar. We had grown up in Indiana, near Chicago. My Gp's had came over with the name of Magyar. This was not his real name. But this is what we lived with since. I can't find anything with that. Then I heard their name was Donolov. My Gm was Eve and her maiden name might have been, like her brother. Lovhiski in East Chicago. I heard they might have been from Lipnik. Also heard Volovet. I'm 81 and if you can help me anyway at all. If you've seen these name or know from East Chicago, Indiana, Please help. My cousins haven't sent me information I've been waiting for. Would so appreciated any bit of news. There were 7 girls in his family here in East Chicago. My Grandpa was Andrew, Magyar in Russian on his tombstone. They were Greek Russian Or thodox. Thank you so much.

I used https://www.familysearch.org/search/ and Ancestry.com for much of my research past what the family knew. Your last names don't connect to any that I've seen. My GM spoke Slovak,and Polish but not Russian. I've also found many libraries have access to Ancestry.com and that can really help to get you started.