No, I'm not going to slam your turkey or holiday--I really love Thanksgiving and I even love the smell of the turkey, even if I don't eat it. It has such a warm and comforting smell that evokes so many memories of dinners over the years with family and friends.

I've been writing blurbs all day about my Thanksgiving. I can't say it was the greatest one for relaxing and enjoying the day, but then again, I wasn't one of those stressing about the turkey being done on time or 14 people coming to my house expecting a great dinner. So, in the scheme of things, it wasn't a bad day--just different.

As noted in blurbs, I started the day well. I got up at 5 AM with great plans to get the pumpkin gooey butter cake in the oven by 6 at the latest and let it cool while I worked on some unpacking. I thought I'd give myself something to be thankful for--NOT going to the rental house and packing my car and coming home and unpacking my car. Seems like I have been doing that for weeks--not just days.

I'm tired and punchy so I'm not focused. I should have looked at the recipe before this morning. I was AT A GROCERY STORE last night on the way home and could have picked up anything I couldn't grab at the rental house before leaving it. I didn't, so lo and behold, I didn't have something. First, it was a mixer. I was sure I brought my hand-mixer with me last night. I did find it and smiled--things were going to be okay. Until I realized I had no beaters for said mixer.

No problem. Easy recipe. Doesn't require creaming or beating a cookie dough well. I can hand-mix it. Got as far as mixing the crust and putting it in the pan. Read down. Spices. All the spices were still at the rental house. I could: a) go to a store that is open or b) drive to the rental house and pick up the spices. I went with B--since I looked ratty and didn't want to change clothes. I did wet down my hair and make it look a little better.

Sidebar: My focus was so off yesterday that I didn't notice my hairstylist parted my hair on the wrong side and "fixed it" that way. When I got in the car, I felt "odd" and when I touched my hair--it felt wrong. I glanced in the rearview mirror and realized it was backwards. I took some water and wet it and tried to reverse it but I ended up more punk than presentable. I decided I could live with that and went to the store all punked out. At least my clothes weren't dirty and I didn't look like a ragamuffin.

Back to the story. So, over the freeway and through the woods to LO I go. I grabbed the whole spice carousel and decided I might as well grab a few more things while there. Like the beaters--might as well have a mixer. Hey, why not grab both the big mixers and the food processor and really be safe this time?? And might as well clear out the cabinet with all the vanilla and leavening, etc.

Now it is pouring rain. It was drizzling when I started but the rain really started coming down. At least, I thought, I have a garage and won't be drowning while I unload the car. I got the things out I needed to finish the cake. I figured I could unpack the rest while it baked. I mixed the spices into the cream cheese and melted butter. Went and got the can of pumpkin, and realized the one drawer not emptied at the rental contained my can opener. I can't comprehend another trip. I'm looking around and then remember an old camping can opener--the little one with the arm you hook into the can and crank. Once again I was grateful that I tend to keep things and got it working and opened the pumpkin. Looking good again. Then, I noticed vanilla. Again, it had been at the rental house with the spices but my decision to bring more to make the trip less of a waste had paid off--I had vanilla with me. Looking good again.

New oven--no clue how to use these newfangled electronic ones. I turned on the temperature and it seemed to be working prior to heading off to get the spices. So far, so good. I then realized I didn't bring a timer with me--both back at the rental. Ok--oven has a fancy timer. I'll use that. I pushed Bake Time and it seemed to set a time and I thought things were going well. I looked at the clock and decided I'd check back to make sure the timer was working in 30 minutes or so--half the time needed. I always rotate anything I bake halfway through the cooking process. Ovens tend to be hotter in the back and cooler in the front. Rotating the item makes for more even baking. When the 30 minutes were up--I didn't hear the timer go off. I checked it and it was sitting around 10 minutes and started working again. I figured I set it wrong and tried again after rotating the cake but then it seemed the oven turned off. 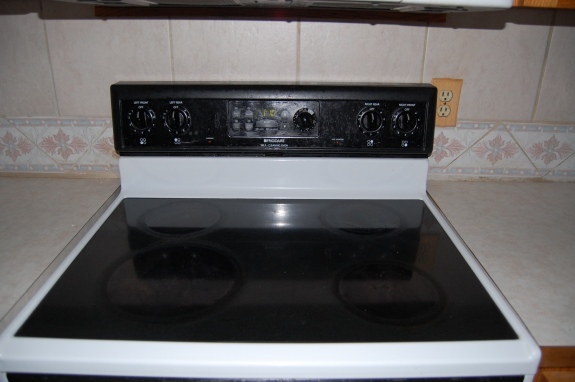 The oven turned off. I started hitting the timer on/off and bake time--nothing seemed to help. I turned the oven off and back on and it seemed to come back on but then went off again. I remembered the book for the oven was in the car so I went out and got the book and discovered I set a bake time to turn the oven off at a given time after baking. Great. I figured out the problem and went back in, turned on the oven again, and set the timer. Oven stayed on and timer was doing a countdown. Back to business--though the interlude cooled the oven so I figured it would take a little longer. Not a problem--time aplenty.

The cake finally got done and I put it out to cool. It was getting late and I wanted to be leaving but the cake was too hot. So, I went back to unloading the car and unpacking some boxes. The cake finally cooled enough and it was late enough that I needed to leave or end up too close to dinner time. I put a plastic lid on the disposable pan but worried it would get soggy if the heat was trapped so I tried to lift a corner for venting but the lid was so tight, I left it alone. I put the cake in the backseat and tried to angle it a bit for stability and safety.

When I got on the freeway, a car made me stop quickly and I heard a CRUNCH that was distinctly plastic lid cracking. I heard the cake slide and knew it must have slid forward and possibly taken a header into the floor. I was on the freeway so no way to pull over and stop to check on it. It was pouring rain and visibility was low and traffic was high. If the cake was in pieces all over the floor--I couldn't fix it anyway. So, I plugged along on the horribly wet road--more worried about unsuspected flooding and losing control but the cake stayed in the back of my mind. I remembered how tight that lid had been. And the crunch was more of a scrunch sound so maybe it just flipped upside down and the cake was in the top instead of the pan. I could ONLY hope!! I decided it could be worse and my friends would understand if it was less than picture perfect and as people are always telling me--it's the taste not the presentation.

When I got to Debbie's house, I looked in the back with trepidation. Surprisingly it had not flipped but merely ended on its side. It was a little squished on the side that hit the floor but otherwise in good shape. The lid and pan had held up. When I picked it up, it all shifted back and looked just fine--no one would ever know that it had been a close call.

I did tell the story at the dinner and everyone had a great time hearing about its adventures and my crazy mixed-up baking at the moment with two separated kitchens. One woman even proclaimed that they would have all grabbed a spoon and gone out and eaten it off the floor if needed--it would not go to waste!

My first Thanksgiving in my own home will stay with me for years to come. Had everything worked as it should, maybe it would have just been another pumpkin gooey butter cake made for another dinner.

Wish I could be thankful that I won't have to go over to the rental place again but I will be there to let the furnace guys in at 8 AM while you are all out shopping and getting your great buys on Black Friday. The house will finally have heat again. Maybe it will seem less forlorn with heat. Empty and cold--it seems desolated. I have a bit more kitchen, then the bathroom and some odd stuff like photos and fragile items to move. Then, back over to cut down boxes and clean up the garage and house. Sunday will be a walk through to make sure I didn't miss something in my less than focused state. Monday, handing over the keys and my rental past.

I'm sure we will have some better stories about Thanksgiving dinner fiascos and successes on Humzoo but this one is definitely one for my memory book. :) Oh, and the oven seems to work great--once I understood how it works. :) I think we can make baking music together. 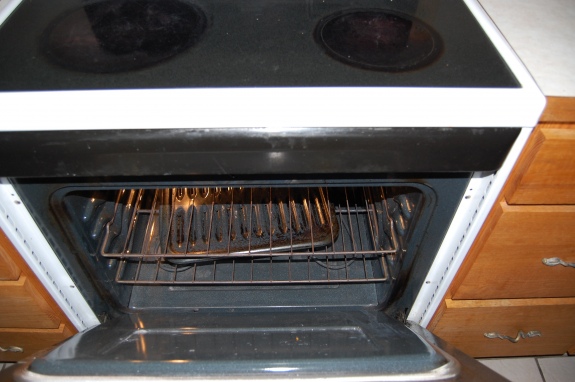 Good story, glad it ended as it did! Things will become easier when you have all your belongings under one roof. Then you and the oven can really make some baking music!

stheinz   Thursday, November 26, 2009
I am glad that cake and you survived all the ups and downs of the day.

You sure have had a week. I would have been one who wass willing to eat off the floor. LOL! I know you ae looking forward to closing the door on the rental chapter. Home the new place is feeling like home now.

We found the most difficult thing about moving is still having to worry about the rental. Once those keys are gone so much will be lifted off your shoulders. I'm sorry you had such a rough day, but as usual you pulled it all off and no one would have been the wiser if you hadn't said anything. You are just THAT good. :) I'm glad your day ended well and you had dinner with some good friends. The baking stories will only get better from here, and I can't wait to read them!!

Man, what a day! We could have some good laughs over your part and my new wig! LOVE, Your sister

What a day! Our oven does the same thing and I have to set the one called "kitchen timer" instead of timer if I don't want the oven to turn off. Why do they do that?

So glad things worked out, I loved your story. Good luck with your final stretch of moving!