Related Content
The Cookie Lady
The Evolution of an Ice Cream Cake
A Shower of Rattles, Wands and Chocolate

A co-worker from Virginia came to town for meetings this week. She's a great person to work with and I enjoy talking to her and helping her when needed. She likewise helps me when I need her help. She always sends me a Christmas gift--usually chocolate and vanilla (she knows what I use!). When she gets to come to Portland, I try to bake her something chocolate (her favorite flavor).

I found a great recipe called Triple Threat Dark Chocolate Cookies. Sounded perfect. LOTS of chocolate. I found she liked nuts since they have nuts in them (the recipe called for walnuts but I tend to use pecans because more people dislike or have allergies to walnuts). Seemed perfect.

I got off at 2:30 and hopped in the kitchen since the cookies needed to be mixed and chilled for an hour minimum. In my rush, I glanced at the recipe and read the butter amount wrong. So, I melted 12 oz. of chocolate with a whole stick of butter instead of 1/2 stick. I realized it as soon as I went to look at the recipe again but how do you separate melted chocolate from melted butter? Rather than start over and try to figure out what to do with 12 oz. of chocolate melted with a stick of butter, I added another 12 oz. of chocolate and melted that while I went and doubled all the other ingredients. NOT easily defeated!!

No milk chocolate chips in the house (rarely use them since they burn so easily) but I had some milk chocolate disks I got at the cake decorating store in case I needed to melt some milk chocolate for a recipe. They are roughly 1 in. in diameter so bigger than chunks called for in the recipe. I hand-snapped 12 oz. of milk chocolate disks. Reminded me of snapping green beans. Got that done and put it all together. Recipe says "divide it in two and roll in waxed paper". I looked at the batter that could pour out of the bowl and wondered how you roll liquid batter? I turned, got the paper, turned back--and the dough had turned nearly solid in that brief time. Now, I had the opposite problem--it was so stiff I couldn't get it to roll in the paper. I'm not sure if it was the temperature of the ingredients or the temperature of my house but it was as solid as I would have imagined it would get in the fridge. In disgust, I tossed the paper and decided to scoop them like a drop cookie and flatten them to nearly the same height they would have been if I had done as the recipe indicated. Mine were probably 1/2 in. high prior to baking.

They turned out very nice. The cookie resembles a flattened brownie--with the flaky look on top that I love with brownies. Due to my doubling the recipe, I had a lot of cookies so I took a box to a group in the office as well as Elaine's box for her to take back to VA (or maybe eat on the way!). I had several people ask me for the recipe so I had to explain all the problems to explain all my changes.

All in all it is a great recipe if you like chocolate. They are rich due to the intense amount of chocolate melted in the batter, then more chocolate chips added--not for the fainthearted. If you really want a great chocolate-chocolate cookie, I recommend you try it. I'll leave it to you to decide if you want to stick with the original method or go with my method--either way I think you will like this one. Angi, maybe a good one to keep track of for next year's Chocolate Day! You will win friends and influence people! .... just remember only 1/2 stick of butter... 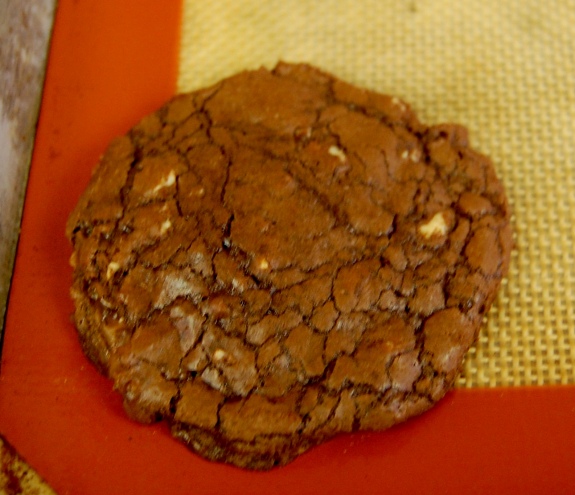 There are no goofs, just happy coincidences!

They sound divine. I think I might have to try these!

Hey Linda
Check this 3 year old out. A girl after your own heart!! http://www.youtube.com/watch?v=VQGpxFmxrBc

I saw, Mike! She's a trip (not the Tripp kind!). I could have cared less at that time except maybe to clean the bowl after the mixing was done. Amazing what 3-year-olds do these days. :)