I love my library.

When I was growing up, the library in Mooresville was my 2nd home. I didn't get to spend a lot of time there--it was too far to walk from my house in the country and I wasn't able to drive there until I was 16. I had to rely on my mom to get me there and she did as much as time allowed but she was a working mom so her time was limited which made my time there limited. I usually rushed in and ran around, browsing the shelves for something new.

The librarians were my saviors--they knew I didn't have much time and, it being a small town, they knew my loves. They would sock books away for me and help me get enough to read until I could return the next time. Books and their care of me made me want to be a librarian when I grew up.

I didn't make it--life changed that direction but librarians still hold a special place in my heart. I went for years ignoring the libraries in the places I lived, preferring instead to buy books to read and keep. After dragging 30 boxes of these books around through several moves, I returned to the library for my reading (and listening) pleasure.

I've mentioned before how I bake for the library workers from time to time. When I had a week off recently, I baked them some chocolate-chocolate chip cookies. Last night, due to some frustration over an inefficient cable modem, I went in the kitchen and baked some toffee-chip bars to take to the library folks today. When I got there, I told the check-out woman that I'd brought them some bars. She is new--I think I confused her a bit but then another worker came out to check out another patron and I saw she was the one I had talked to before about cookies and treats. She saw me and her eyes lit up! She saw the box and said "what are you going to do with that box?" I guess I worried her that I would have a box that I only brought with me, but wouldn't leave. I assured her the box was for them and I was leaving it. She said "we have a woman whose birthday is today--we'll tell her you brought the bars to celebrate her birthday--hopefully she will share!". She went to get the woman. I think the woman was a little confused how I knew it was her birthday but she went along with us and took the bars back to the workroom with her thanks.

The woman checking me out said "look at this". She turned the screen (normally turned away from patrons) to me and it said "Thank Linda when she comes again for the wonderful chocolate cookies she brought us--they were delicious!" I didn't realize the patron accounts have a comment section! Apparently it is used by the library workers--according to one of the workers for less than flattering comments most of the time (I guess it is a bulletin board "most wanted" area!). We all got a good laugh at my secret admirer (no signature) leaving messages for me.

I had a 50-cent fine (bad tracking of due books on my part!) to pay. I had my 50 cents with me. The two workers removed the fee from my account and refused my money. I guess that puts the price of my bars at 50 cents. Not a bad deal at my favorite library. 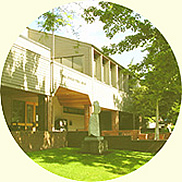 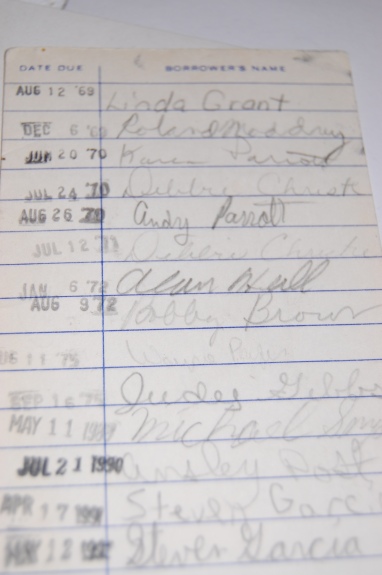 What a bargain for the librarians. So what are you going to spend the saved 50 cents on? You can't even get a pack of gum with that. Come to think of it, I'm not sure you can get anything for 50 cents anymore.

Sounds like you have a wonderful library! So what do you like to read? Cookbooks? LOL! What else?

PS.... I'll think of you on my weekly trips to the Mooresville library!

I to love books and libraries. Our little town of Walnut Cove has just added a new addition to our library that will double its size. When we took Caroline to see her new school on of he things she wanted to do was go to the "media center." I was in Heaven, every book was brand new. We had to drag her out of there.

I just had a great experience in our library yesterday. I went in to pay a fine and see about getting a new library card. Even though I live right in the middle of Springfield, our taxes go to the county instead of the city, so if I wanted a library card, it would cost $90 a month. It would be worth it to me, but a lot of money. Instead, the woman pushed my license back to me and told me my card doesn't expire until 2010, so we'd never had that conversation. It made my day. I checked out a whole bunch of books for my kids and me.

China, it does my heart good to know that someone like you and Cami are keeping my old Mooresville library used well. I was lucky enough to visit it again before they did the remodel and upgrade. I realize that is a good thing and people are happy with the change and it was long overdue but I was happy to see my old library exactly as it was when I was growing up--even the same books in the same spot on the same shelf. I know--showed its age and was severely outdated but I was "home" and that was nice once more. I'm sure the new library is even better and more loved with all the new books and space and light but I enjoyed seeing it as I saw it when growing up. :) I read and listen to just about anything that appeals to me or that someone suggests as a good book. But, I do check out some great cookbooks too. I love looking at recipes and the photos of the different foods but happily can return the book to the library with no cost to me. :)

Mrs. Shoo that is too bad it is such a high fee. I checked my library since I don't have that issue and it is $75 annually if you are not a resident. I can't believe the city doesn't have its own library system and only the county. Ours is county based but as long as you live in any of the 3 major counties in the Portland area--you don't pay fees to any of the 3 counties to get a library card. Hopefully your system will work on that to make the library more affordable to the city-dwellers. It would be a shame to keep people from the library because they couldn't afford the fee.

Hey, Sis, I got a kick out of this one. Remember me, I always had the overdue books and the fines out the wazoo.. remember Mrs. Dishman. She was the librarian from hell. I went to the library last year with Mama and Otis to change their voting address, I think. That is when I introduced Mama to the library internet. She keeps talking about going back. Most of the time I print your blogs and she enjoys reading them. I noticed the protraits of the past librarians. Mrs. Price, my reason for loving reading, Mrs. Johnston, her coke bottle glasses, and then Mrs. dishman, AUUGGHHHH! Have a nice day! Love ya, Rose

I added a photo to my blog. I was looking for something else and ran across this library card that I shamelessly swiped from the Mooresville Library. They are no longer being used by the library and more than likely the book I found it in will be discarded if it hasn't been already during all the modernization. Proof positive that I was there in '69. :)