Related Content
A Shower of Rattles, Wands and Chocolate
Necessity is the mother of invention...
Strawberry Fields Forever...

An apple a day

...wish it would take the heat away instead of the doctor. I'm trying to think fall even though Portland seems to be in an indian summer (that's not politically incorrect to say is it?) and it is very warm. A good friend at work has a birthday on Friday but is taking the day off so I'm baking him a cake for tomorrow. When I checked my list, one of his favorites is my famous apple cake. When people ask me for the recipe, it's "that apple cake". Like DBCC cookies, it has a long history and has been made many MANY times in my 6 years here. My favorite way is prepping all the ingredients the night before, putting the sensitve ingredients in the frig, gathering the ingredients the next morning into a one-bowl-mix-by-hand batter and baking it to serve warm for breakfast. I've occasionally noticed I can smell the warm apple cake on the bus and wonder how many people crave something for breakfast after they get off!

You start with water and white sugar (I've also made it with raw sugar--a little trickier since it's already brown in color so you have to watch to avoid burning it!) I add a dollop of corn syrup. That prevent sugar crystals from forming on the sides which drop down into the sauce and make it gritty or slow to caramelize. You can also add things like vanilla extract or a touch of lemon or even a smidge of coffee--whatever you might like to flavor the caramel with (other than caramel!) 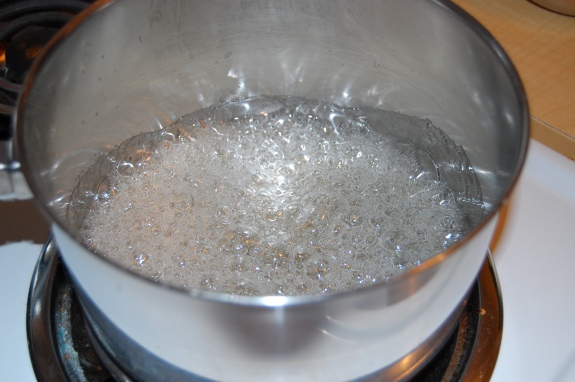 It starts out clear 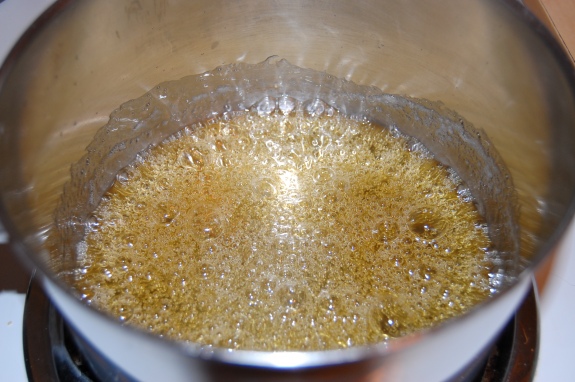 Starts to brown--this is the point where you can't leave it or it burns. 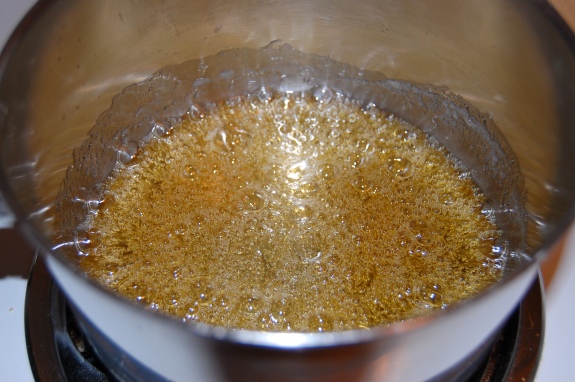 When it hits the right color, you add heavy cream 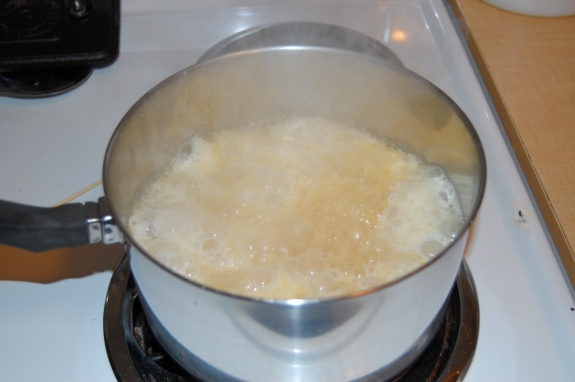 It bubbles up and the caramel turns into a big wad of solid candy--not to panic! 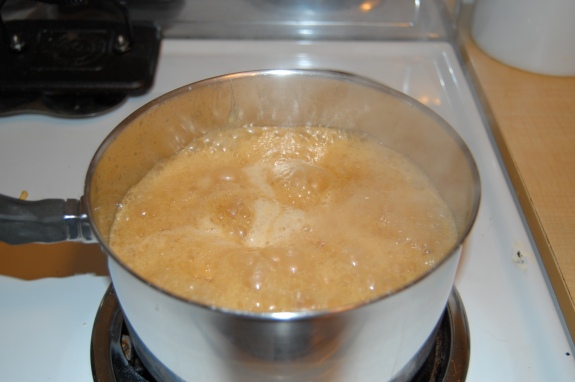 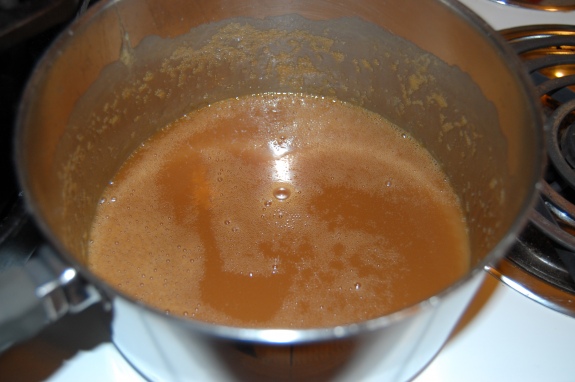 Magic - Smuckers eat your heart out! 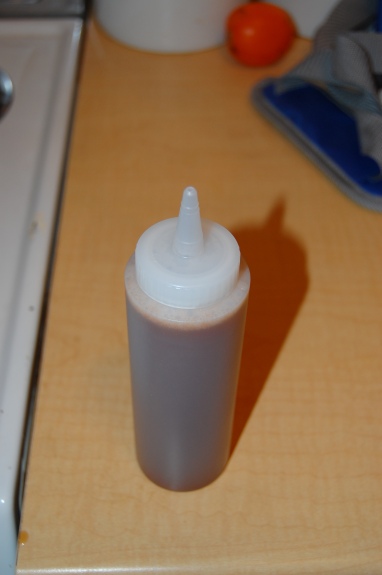 I put mine in a squeeze bottle for easy dispensing

The cake is dense and rich with flavor but surprisingly low in fat. If you skip the caramel, the whole cake contains only 1/3 to 2/3 cup of oil. The original recipe called for 1 cup. PJ at King Arthur's modified that to 2/3 cup. I modified it more to 1/3 cup. A good earthy apple cider is increased from 1/3 cup to 2/3 cup to keep it moist and add more "apple" to the cake. You start out by dicing the apples and putting them into a bowl with some brown sugar. You let that sit for at least 45 mins. and the apples release their juice and you get this wonderful syrupy mixture to add to the dry and wet ingredients. 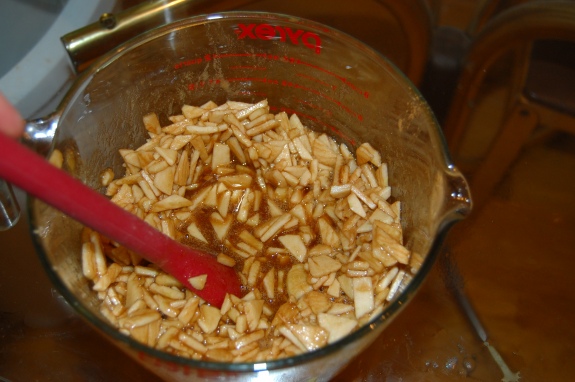 Makes my mouth water to look at all that apple-y goodness!

My cake turned out great. Because I lower the fat/oil it can be tricky if the pan isn't prepared well and will stick. Crisco has a new flour/oil spray that does a nice job of keeping things from sticking without a lot of grease and flour added. I didn't set it up for baking in the morning since I want to box it and it would get soggy. It will have a chance to cool overnight and be ready to box in the AM. 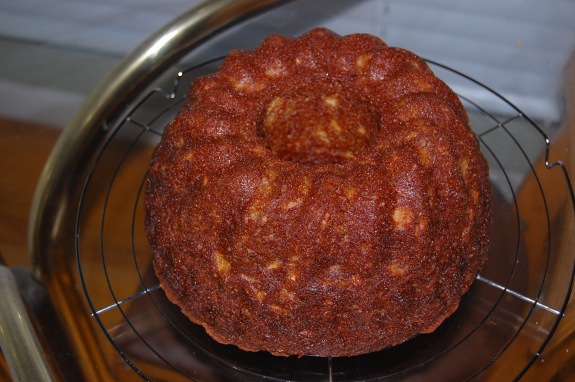 Um, yum. Roger would love that.

I would except it was a birthday cake and it's been 'et. :)

Recipe [bracketed amounts are my changes] As noted above, I do not drizzle the cake but put the homemade caramel sauce on the side for optional use (and quantity!). Usually there is 1/3 to 1/2 of the squeeze bottle left--it goes a long way. Merrick gets the leftover and uses it for coffee enhancement and frozen yogurt topping.

This recipe came from Nonni several weeks ago, with the following note:

Though I’ve seen similar recipes, my interest was piqued by how easily this one went together, and I was intrigued by the methodology—mixing the sugar and fruit first, to draw out the fruit’s juices, seems very sensible. I didn’t have a lemon, so couldn’t try the topping; however, I did have a chunk of caramel, which I melted and drizzled over the cake. The folks at our warehouse gave it a huge thumbs-up when I brought down a plate for their coffee break.

The original recipe called for a cup of vegetable oil, the kind of copious amount often called for in ’50s-era fruit cake recipes, before fat became such an evil word, nutritionally speaking. I cut it back, substituting some cider instead, and it was delicious. Go with the original amount of oil, if you like, or substitute cider, boiled cider, apple juice, or milk, to cut the calories and fat grams a bit.

*This would also be delicious with pears, or a pear/apple combination.

In a large bowl, mix together the apples and sugar. Let rest for 45 minutes, stirring occasionally, till the mixture becomes syrupy. [I do it overnight and put 1 of the teaspoons of cinnamon in the mix]

Whisk together the flour, salt, soda, and spices. In a separate bowl, whisk the oil, cider (or other liquid), eggs, and vanilla. Stir the wet ingredients, the apples, and the nuts into the dry ingredients, stirring just till everything is well-mixed.

Spoon the batter into a lightly greased [with the lower fat in my recipe, I'd suggest well-greased] tube pan, bundt-style pan, or angel food pan. Bake the cake in a preheated 350°F oven for 15 minutes, then reduce the heat to 325°F, and continue to bake for an additional 45 minutes, or until a tester inserted into the center comes out clean. Remove the cake from the oven, allow it to cool for 5 minutes in the pan, and remove it from the pan. Drizzle with the glaze (or melted caramel), if desired. Yield: about 16 servings.

Glaze: While the cake is baking, mix together the lemon juice, grated rind, and sugar, stirring to melt the sugar.

Caramel Sauce
Recipe adapted from Creole Christmas Cookbook, by Emeril Lagasse, with Marcelle Bienvenu, published by William Morrow, 1997
1 cup granulated sugar
1/4 cup water
1 cup heavy cream
In a small, heavy-bottomed saucepan, combine the sugar and water and bring the mixture to a boil, stirring often. Cook, stirring occasionally, until the mixture is a deep caramel color and has the consistency of a thin syrup, 10 to 15 minutes. Remove from the heat. Stir in the cream, return the saucepan to the high heat, and boil the sauce until it regains the consistency of a thick syrup, about 2 minutes. [I don't boil it that long--just long enough to relax the caramel into the cream--your option for thicker or more liquid for easy pouring and absorbing] Cool.
Yield: about 3/4 cup

Carrie--it reminds me (cut) of a fruitcake but not quite that dense and definitely not that heavy. Maybe Gigi will remark on it since she has eaten it. Or Merrick if she stops by. Our workplace has been less than pleasant this week so she might not be in for a bit. :) I hope she comes and shares some great new photos of Layla when she feels like it.

What kind of apples do you use? It looks fabulous!

I use Granny Smith most of the time because those apples are almost always available and always good quality. When the season is right, there are lots of others to choose from and I check out the apples for a firm and crisp flesh that isn't overly sweet like Golden Delicious. This particular cake, I found some great McIntosh apples at the local Whole Foods. The great thing about the farmer's market is the sampling of various apples for eating and baking purposes. Another good one in this area is a JonaGold (I think that is the name). It's a cross between a Golden Delicious and Jonathan apple. It has the good flavor of the Golden but the Jonathan firms it up and crisps it. The one apple I would never use would be a Red Delicious. I used to think those apples were great eating apples but now I can't stand them. They taste insipid to me and were never considered a good baking apple in recollection. My mom would always use "baking apples" which were sturdier and less sweet for baked apples and pies, etc.

I'm a big fan of Grannie's for eating and baking and they last much longer than other varieties too.

I totally agree, Leslie. But, I love to play with seasonal ones while they are at their peak. I ate a few bites of the McIntosh (mostly peel) and it was quite good. Crisp and firm and juicy. If I have to pick one, Granny Smith would be the one. :) You have to try this recipe if you like apples. It is so good and loved by all who try it. Great breakfast, snack, dessert cake and like a pound cake has a great moisture for days (if it lasts that long!)