No, nothing controversial here. Just indicating the name of my brownie recipe. It's funny that SATenor did the blog earlier about a little cake for 1-2 people and I just happen to be making a pan of brownies that looks like everyone in Humzoo is invited to the party (well, you are but the commute will kill you!). My soon-to-depart co-workers are being allowed to pick a treat before they go. First one was the chocolate mint sticks of yore. Actually that pick will be repeated in 2 weeks--another one picked the same recipe (must say something about it!). The second pick is brownies. Nothing fancy, just good old-fashioned plain brownies with nuts.

I have a very good recipe that came from Barefoot Contessa called Outrageous Brownies. Start with a pound of butter and a pound of chocolate (got your interest already!). 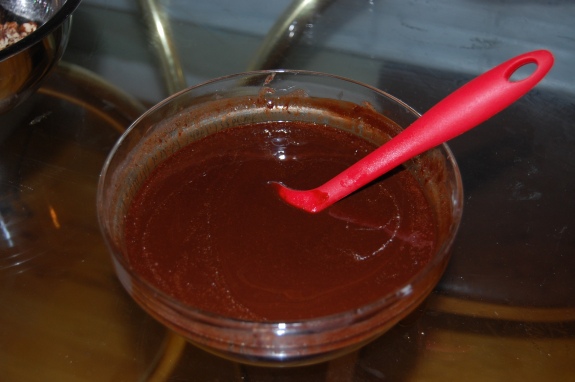 Toss in a few eggs, some flour, sugar, a little instant coffee, vanilla and baking powder. Then another (nearly) pound of chocolate chips and (nearly) a pound chopped nuts (I used pecans) 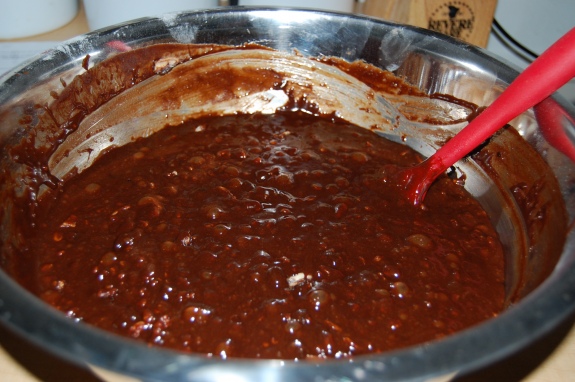 Find your biggest cookie baking pan (referred to as a half-sheet in bakeries--if you have ever seen a big bakery cake brought to an event that's usually a full-sheet so think 1/2 that full of brownie batter!) 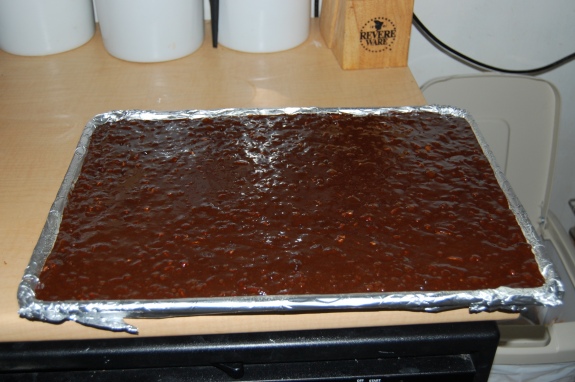 Bake until done (roughly 30 mins). The interesting thing is halfway through the baking you lift and drop the pan on the rack in the oven to release the air in the brownie to really make it chewy and dense and less airy. Most people prefer a non-cakey brownie. 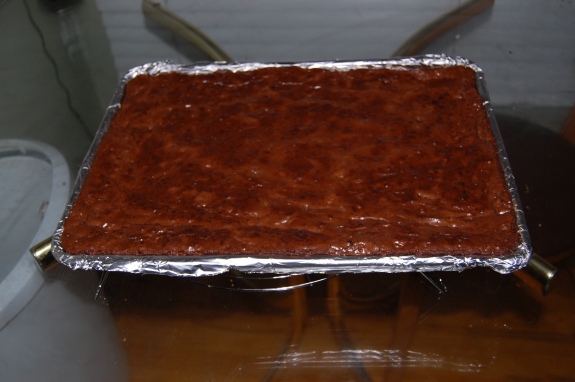 Oh, the reason I went with this big recipe is to share some of these brownies with another co-worker who works in another building. I've been promising him brownies and the way things go at offices these days...maybe I'd better make them now and not trust the future. LOL 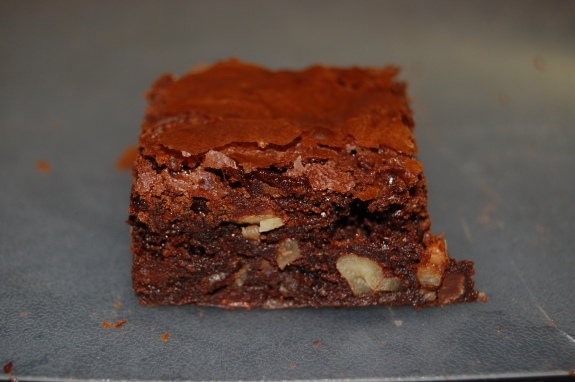 Looks like another great recipe! The Barefoot Contessa rocks!

I agree--she has some great recipes and I have quite a few of them in my list. Every one I have tried has been a success. Hopefully the guys will enjoy them as much as you do visually. LOL

I ditto that Pegi, she does indeed!

Thanks, guys, I needed that today. I so do not want to be at work. The good news is I don't have to be all next week so if I can just manage to make it through today. :)

I want to swim in the brownie batter

It was a big enough pool, Spike. I got roughly 96 brownies from the batch. Enough for the guys, another box for the out-of-office co-worker and a couple of small boxes for our interns.

I'll have to write this down and use it when I need to make LOTS of brownies for something. They sure do look yummy!

My sister told me she made the minute chocolate mug cake last night and said it served 3. She would recommend making it in a soup mug if she were make it again. I continue to ask her to get a humzoo account so she could post pictures and blog ... ho hum...so close to seeing that one...drat.

After thinking about the outrageous brownies, I think I remember seeing that episode of the Contessa making them. Possibly for a picnic.

Let me know if you want the recipe. Not a hard one--no mixer required. Just lots of chocolate and butter. :)

She's made them twice. Once with chopped Oreos and once like this with the nuts. I have both recipes. I don't think I've done the Oreo one yet.

I'll try to do one of the ones you indicated and let you know how big and how easy and of course take photos when I do. My mugs are 12 oz, I think. Can't remember. I kept seeing cakes or desserts made in mugs and baked in the oven so I looked long and hard for a good deal on one that could go in the oven. And it is a pretty mug too--red with a pedestal type base.

Spike, I'll go for a dip with you!

Ericka has a new pool, we can fill it with brownie batter. ;)

LOL, sounds good to me!

Yum. Brownies are my absolute favorite. That's another of my comfort foods. For as long as I can remember, when I was sad, for whatever reason, my mom or Gram would make brownies. They always made me feel better...at least until the tray was gone.

A brownie is near perfect. Deep, rich, layered with dense, chewy, light textures and slightly crunchy on top with the flaky top. And all that complexity comes with one of the simplest preparation and baking. No worrying about cakes that doesn't rise; mixers, etc. Usually a spoon and a mixing bowl and little concern once it hits the oven to achieve this perfection. :)

I love it. that is so sweet of you to think of us when you find great finds like that. I think we shall order one and make cakes to take to the music festivals we go to. Too fun!!!
-bek

I just looked it up on foodnetwork.com and Ina's recipe yielded 20 large brownies. Of course if anyone is familiar with the size of Ina and her food it comes as no surprise that any normal person would yield 5x that many!!! I can't wait until I have time to try it! Looks YUMMY!

Her brownies were huge. Like slabs of pavement. She even admittedly said they were huge. I cut mine roughly 2 in. square. A good couple of bites. I went 1/2 then 8 x 6 twice when cutting mine. You could certainly cut them bigger for a brownie a la mode or more of a dessert. Mine usually are munched at work so a 1-2 bite is the perfect size and they feel they can eat more because they are so small. LOL

Bek--it just sang "Bek & Will would love this". Can't wait to see the cakes when you get them done. I think it is a cool cake pan too. :)

All this talk about brownies is killing me. There is NOTHING good to eat in my house tonight. I pretending that Linda is down in my kitchen baking right now. I can smell the warm chocolate aroma as it floats up the stairs. Ahhhhhhh.....

Well, it is lemon at the moment. Maybe try that minute chocolate cake of SA's to tide you over until you can make a batch (or buy!) of brownies. :)

My in-laws are bringing me sickyhead brownies tomorrow. I can't wait. Tonight I'm settling for a Sonic strawberry limeade and candy corn (Brach's, of course).

Cure of the gods--candy corn and strawberry limeade! And brownies tomorrow--you will be cured for sure!! Can you send Leslie one of the brownies--she is suffering.

Linda, my house is smelling mighty good tonight, thanks to you! It's not hard for me to pretend you're in my kitchen cooking!! I'm baking some more of my favorite of your recipes - Berry Oatmeal Crumble Bars. A friend of mine has had a very sad week and I hope these help to cheer her up tomorrow. Your goodness has reached near and far.

Pass it forward--Berry Oatmeal Crumble Bars should make anyone smile. Not to mention having a good friend like you too. :) I can smell it from here. Yummers!!

That's very nice of you, Nancy. I swear by the feel-good power of baked goods. They make anyone feel at least a bit better.

I've had a good teacher in LGrant!! LOL

I think we will have to name those bars - BOC Bars because I think they are fast becoming Nancy's DBCC cookies for all occasions. :)

Okay... I can't find it, and it's not related to brownies, but.... were you the one who found a type of flower but didn't know what it was? I had seen the same flower before but didn't know either. And yesterday I found out. It's called lantana Pics here:

Was that you? Am I remembering correctly? If not, I'll have to go on an all-out Humzoo search!

Maybe this one? Pegi said she thought it was that, I believe. Those photos in the links are gorgeous!

Yeah! That's it! I love the flowers. Now that I know what they are, I'm going to see if I can figure out where to put them in our garden.

It's even more extraordinary in person than my shot. Amazing to look at.