The Real Candidates in the Race...

I know everyone is focused on the presidential election coming up but I think tonight's vote is more critical to the future of our country.

Most folks know about DBCC cookies (unless you are new or avoid my site like the presidential candidates avoid the more controversial topics during their debates).

I was given a recipe that the sender argued would rival any chocolate chip cookie. Nay, I say John P. (the sender) was obsessed with this recipe and says he makes the cookies almost weekly he is so addicted to them. To a baker, that's like Niki waving a chocolate doughnut with sprinkles in front of Denny's nose. Of course I argued for my candidate, DBCC. But, no, John P. was pretty adamant that his cookie would win the election.

I mailed John P. a batch of DBCC cookies and he had to agree my candidate has some valid arguments and seemed to sway a little but stands by his candidate (we'll call TCC cookies).

Rather than have him bake me a batch to debate the issue, I decided to set up my own forum for the candidates to debate each other in person (or is that in cookie?). I didn't want any outside influences (different oven, different butter or flour) to unfairly give an edge to one or the other candidate. I wanted it as fair a debate as possible.

Here are the candidates faced off on the platform (i.e. table):

(DBCC is on your left, TCC is on your right)
I have to say my first exposure to the raw candidates (pre-baking) was a tough one. Both bring butter and sugar to new heights. TCC does have some unusual traits that diminishes DBCC. TCC uses two flours (bread flour and cake flour) that does bring a subtle improvement to the basic batter. Tough on DBCC--a flour disadvantage. TCC also uses a higher ratio of butter. Clever...we all know that fat influences votes. Our taste buds just warm to fat.

Obviously TCC is ahead in the ingredients list. Now we come to each candidate's party. First DBCC (the incumbent) and his party: 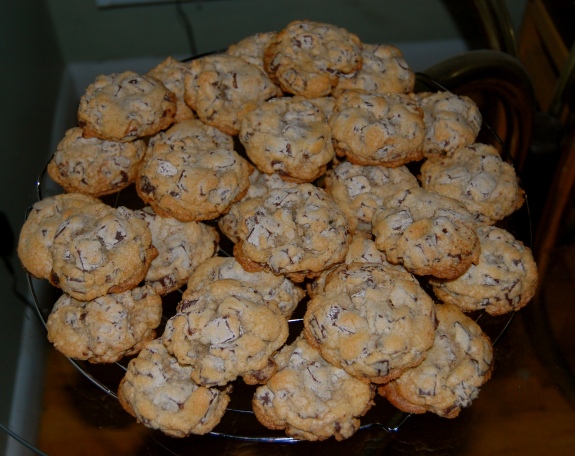 And now TCC (his opponent) and his party: 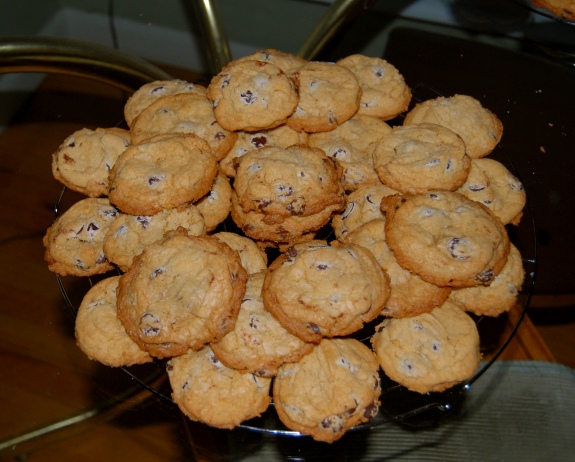 They say an election should be about the candidates' positions but we know appearance plays a huge role (ask Nixon).

So, I leave it to you, the voters, to decide if DBCC can hang on at the top or be deposed by the new kid on the block. Two visitors to Portland will have the opportunity to meet the candidates face to face and make the final decision.

DBCC has been top cookie in my kitchen for many years--it will be hard to see him drop to #2 position. I don't think he will ever be ousted but there can only be one Top Cookie (unlike Merrick's 20 Top 5 Favorites).

One more look at each candidate: 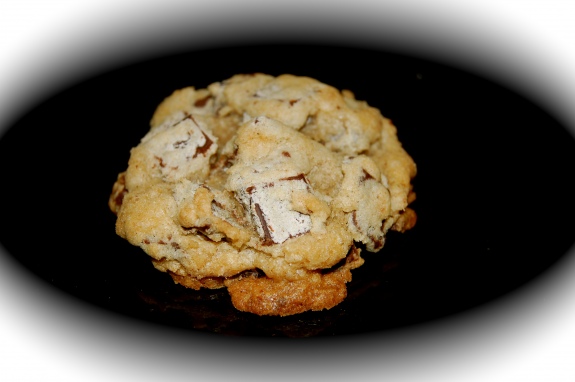 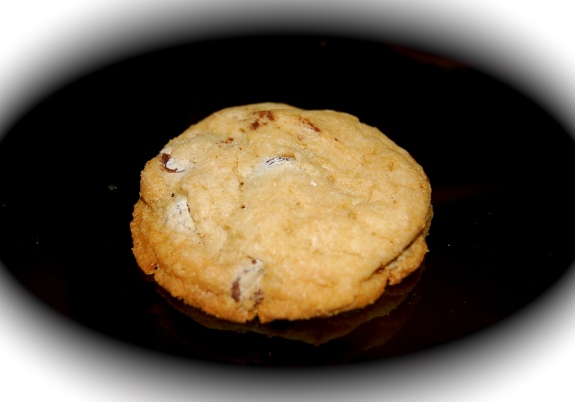 Regardless which candidate wins the election, I will support him as I have supported the Top Cookie in the past.

Okay, I like the TCC golden color, but I think that is ONLY because of the lack of chocolate in the cookie! ;-) It does look mighty delicious. But I have tasted yours...to die for. Just to die for! You know, right, that Richie will not be a good person to try this out on! He likes anything with chocolate; and he's biased to your cookies! He's not a fair judge. LOL

I think TCC would make a great standard choco chip cookie, but yours definately takes it to a whole other level with the levels and degrees of flavor and texture!

I will take DBCC and TCC as a VP. Please email me some cookies! Thx.

Absolutely! And I want them to crumble all the way down into my tummy!

Ashley, unless Richie is capable of eating half of those cookies before returning to Phoenix, you'll have an opportunity to meet the candidates as they travel around the country--looking for more votes. Appearance can be deceiving. DBCC does start out with a larger ratio of chocolate but TCC nearly doubles the cookie count. Quality vs. quantity...always critical in any campaign.

Linda, what a clever blog!! You are blooming as a blogger and a baker!!

I have also been the lucky recipient of some DBCC's and I say they can't be beat!! Not by TCC, not by anybody...or any cookie, for that matter. Crumb for crumb, chunk for chunk, DBCC cookies rule!!!! Put me down for DBCC!!!!!

I think the fact that I can see the chocolate in your DBCC makes it the clear winner! TCC is hiding all it's assets! What else might he/she be hiding! What if TCC has been hanging out with the crazy splenda guy!

Linda, I'm floored by the fact that you can so significantly underestimate Richie's cookie eating abilities! Shame, shame on you! You did not witness the previous batch and how he demolished them. Undoubtedly, he is totally capable of finishing those puppies off before he get's home. He's in a hotel alone for another two days...what better friend can a man have than choco chip cookies!

I vote with Spike!!

Like dannie - I vote with Spike! (on this issue at least :))

justmeg   Wednesday, October 29, 2008
Where do I get a bumper sticker? I have never tasted your DBCC cookies, but I have seen the poll results from all over the country and though I tend to be an undecided voter, I could never vote against you and all the goodness you stand for.

OK, I'm new so I have to ask.  What does the DBCC stand for? They look awesome BTW.

I don't know...I love the color of the TCCs. And more butter? Really hard to beat. Send some out here to Springpatch, Linda, and Shoo and I--cookie connoisseurs--will judge for you. You wouldn't want someone biased, right??

DBCC= Death by Chocolate Chunk cookies. LGrant is our resident baker and these are her specialty. They are to die for!!!!!

The candidates have been delegated to the two PDX visitors to vote, reflect, consume (bet Obama and McCain can't say they have been eaten for votes...yet).

Given the historical past of Springfield, I think a visit might be arranged with a sufficient quorum present. Who wants the responsibility of establishing a voting establishment?

Here is the recipe if you would like to sample some fare from the incumbent Top Cookie, DBCC.

I think I must vote for DBCC only because I have baked and tasted them myself and by looks more choc the better!

Looks like DBCC's chocolate quotient has made him a frontrunner. However taste might be a deciding factor. I did sample one of the TCC cookies (rare for me but I wanted to see how it stacked up after baking and I have to admit the higher butter ratio makes for a very buttery nearly caramel flavor to work with the Ghiradelli 60% Dark Chips.

Merrick has 2 of each to sample when she returns to work next week. Perhaps she or Ashley (since we know Richie is of little critical value) will give us their opinion after sampling both.

Thanks. DBCC definately gets my vote - even without the tast test. More chocolate and I'm not a fan of dark chocolate that is in the TCC.

I am frigging starving.

LOL, Betsy. Now you know how your food photos make everyone feel. :) I've been up and baking this AM. Got TCC mixed and aging in the frig (it is supposed to make them better) and DBCC mixed and baked and cooled and in the box. I love working from home. I get so much done with that extra hour back from not commuting to work and no time required to get ready. Not to mention it is 30 degrees cooler in my house. LOL

Let me know if you need a shipment of cookies, Betsy...though you should have free cookies all the time at work now...right??? :)