My car is named Gordon. After Gordon Lightfoot. Gordo and I have been through a lot together. He's been there when music healed or soothed or cheered. I felt it only fitting that I name my car after him.

It's been a good car. No major problems. Got me here from MN along with my dog and two cats. Patiently sits out in the elements and doesn't complain. Dutifully waits for me each day at the park'n'ride, ready for our next adventure...or at least errand together. He's young in mileage if not years and could last for a long time to come.

During our "Arctic Blast" Christmas 2008, the streets were treacherous and rutted and accidents were rampant. I made a couple of trips out but saw it was bad and brought Gordon home to safety. In spite of all my care, parking him carefully and protecting him when the roads were threatening, he was injured. Not during the storm but after it was all over and the streets were safe again. A parking lot plowed and piled snow shortening the parking spaces and a misstep by a driver and Gordon was damaged goods. 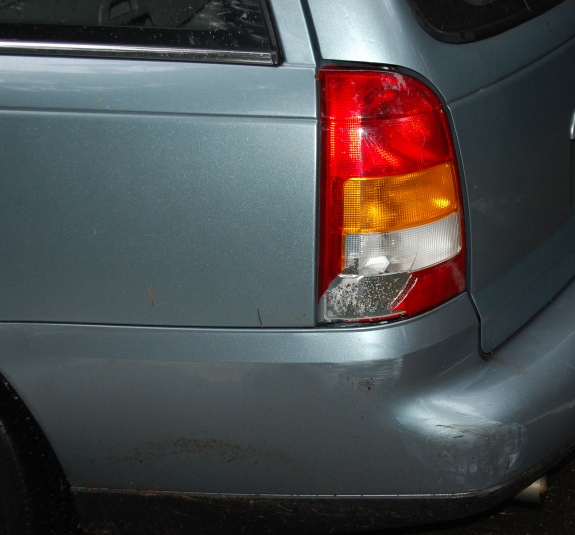 I related the incident on Humzoo and showed the damage. Minimal. Looked to be an easy fix. The other driver was responsible, his insurance company was quick to do an estimate, a friend recommended a good auto shop. It all seemed like an easy fix if a traumatic incident to me. Until the auto shop tried to find the replacement taillight. The car is a 2000 Saturn L Series Wagon. Probably thousands of them out there. You wouldn't think it would be so hard but apparently timing is everything and the economy, Saturn/GM's problems and my car has stayed scarred and damaged for 6 mos. I've been meaning to call Will (my sleuth) at the Auto Body Shop for over a week. Part of me dreaded the inevitable "still haven't found one but I check daily" response. I'd heard it once a month since January. April was supposed to be a given but then it was May, then June. As much as I wanted to call, I just couldn't face the cheerful and apologetic answer again.

It was therefore a surprise today to get a call from Will (for a change!). The enthusiasm in his voice was my first clue. I called back immediately when he said they thought they had a taillight, albeit a used one, and wanted to see if it would fit. I went as soon as I could (shaking off one of those people Niki loves who thinks their procrastination is my emergency). I would not be deterred!

When I got there, Will came over and chatted and warned me they weren't sure it would work but they hoped. I sat and sat while he talked to another customer and that "5 minutes to put the taillight on" that was promised back in January stretched like cheap elastic and my hopes started to fade. Will came in and told me he would go back and check on the progress.

Oddly I started feeling I was at the car hospital and the women at the counter would start yelling STAT over their walkie-talkies and Gordon might be rushed by on a gurney. Mechanics started dashing around like medical personnel and the surreal effect was completed by Will coming out and sitting down beside me. Being the Star Trek fan of old, I expected to hear those classic words "He's dead, Jim". Well, maybe not that bad but "sorry--didn't work" was expected. Surprisingly Will told me that the light looked like it might work but they'd blown a fuse trying to install it and it would take a bit longer than expected.

Finally he came and told me Gordon was whole again and ready to go. I'd mentioned being unable to wash him at the car wash due to the taped up taillight and they did a quick but effective wash for me. He'd told me back in January that if I waited 90 days before washing other than hand-washing the car, I'd get a free hand-wash if I brought it back. Well, that was the plan but we know about the best laid plans. Because they used a used taillight, I got a refund. Will also noted on my account that a used taillight was installed. If it acts up in the next month, we'll discuss finding a new one to replace the used one. Otherwise, I have a whole car and a refund so I'm good to go. Oh, and in a month they will check it out to make sure it all looks good and give me that free car-wash promised in January. 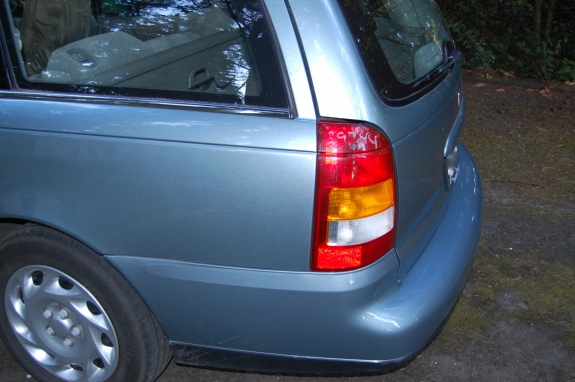 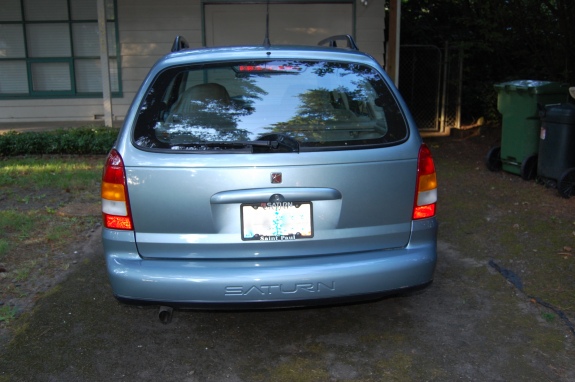 It's a beautiful thing to see my car whole again (not to mention clean!)

Interestingly, this week I got a letter from Saturn, thanking me for my loyalty and assuring me of a future for Saturn cars. Coincidence? 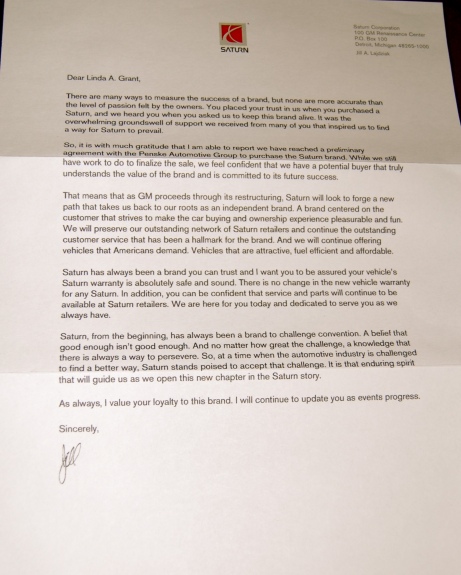 As Gordon says in his song "Fine as fine can be". His namesake looks pretty good for 30,000 and nearly 10 years old. I feel like driving around tomorrow to show him off...but then all those other drivers...not paying attention...maybe I will keep him home and just look at him shining and whole for one day. :)

So glad everything worked out and Gordon is whole again! He's looking great!!

Not bad for nearly 10 years old, eh? :) I'm glad it all worked out too--just wish it had worked out in January! :) I'm not sure Saturn has assured me yet to buy another Saturn. LOL

Glad to hear your car is finally whole again. It really does make a difference to have slight damage to your vehicle. Even if it runs, you are always aware there is an imperfection. Hopefully Gordon stays this way!

Yay for Gordon! He is a very handsome gentleman.

That's great that they followed through after so long!

Great story! Gordon is lucky to have someone taking such good care of him!

I'm glad Gordon is fixed for you. However the comment from K8Day is funny to me. My van has so many imperfections it isn't even funny. The sliding door has falled off TWICE in my hands. rflmbo

So, far I've been lucky. My last car was 15 years old and other than an idiot dog owner letting their dog scratch the door the first week it was ever driven--it never had one accident. Not even a fender-bender. Living in MN for those 15 years and all the winter driving and freeway driving--I thought that was pretty amazing. So far, Gordon has avoided 2 serious accidents (I should relate the one in a blog--it was pretty amazing). It was the irony of it happening the day everything melted and the roads were dry and safe after 2 weeks of horrible and messy driving. I literally just wanted to sit down and cry over the damage. I knew it was silly but it really hit me and I know that poor guy must have seen it in my face and realized how it was affecting me. I hadn't had an accident in a car for over 20 years and hardly remembered what to do it had been so long and my cars so undamaged. I realized this morning I missed a perfect title for my blog and nearly changed it but I thought that would confuse those who already read it. I should have called it "Good Will Hunting". LOL

When Roger Penske and his organization build and sell Saturns, you will have one of the better cars on theAmerican Road.

I don't plan on replacing mine anytime soon. At the rate I'm going it will be 30 years old before it hits 100,000, but thanks for the tip.

So glad Gordon was made whole again.
Steve is on his 3rd Saturn (2 SL2s and now a beautiful blue Vue) and he will likely continue with them as long as they are available. The first one was purchased in 1997 and none of them were new. Our boys had a very serious accident in the SL2 where it rolled/flipped 3 times and ended up in a field. They were both buckled, the air bags deployed and the cage protected them. Only injury was a fractured shoulder blade for Andy, our youngest. The car was completely totaled but our sons survived! That would not have been the case with many other cars.

That's surely a confirmation of safety, YammaSue! You do want to have something that will protect you as much as possible if that kind of accident occurs. I do like my Saturn and I really liked the Saturn dealership in MN. I can't say the one in Oregon impresses me as much but I do like my car. It's been a good one so far!

that is crazy it took so long to get a dang taillight...my dad's name is gordon, but he isn't blue.