Related Content
A Shower of Rattles, Wands and Chocolate
The Evolution of an Ice Cream Cake
When bad things happen to good cakes II

Like Lionheart, my library (books) call to me more than anything else. It's been 2 weeks and time to go visit my library folks. Of course, even though it is hot as Hades around here I have to take them a treat. I'd hate to disappoint them. During the cooler part of the day I put together an easy if not simple cake. I found one called a Candy Bar Cake. Not the lightest fare for hot weather but then they are working hard and inside the cool library so maybe it won't seem too heavy. Just sounded easy to put together and I had the parts (for the most part).

The cake called for unsweetened chocolate but from that point on sweet seemed to be the theme. Of course with a name like Candy Bar Cake--what did I expect?? The usual flour, eggs, sugar, chocolate and buttermilk to make it tender. Once it was baked, you were supposed to pour a can of sweetened condensed milk mixed with 1/2 cup of caramel topping on the cake after poking holes in the top to allow this mixture to ooze down into the chocolate cake. I didn't have the topping--could have made some caramel sauce quickly, but I went with the can of milk and 1/2 cup of homemade chocolate syrup. I thought that might balance the sweetness of the condensed milk more effectively and add another chocolate note to the cake.

Next I was supposed to put chopped Snickers on top of that. I did have the Snickers but figured since I dropped the caramel, I'd used chopped Milky Way. I guess I lost the battle with making it less sweet but then I did keep that chocolate note high. 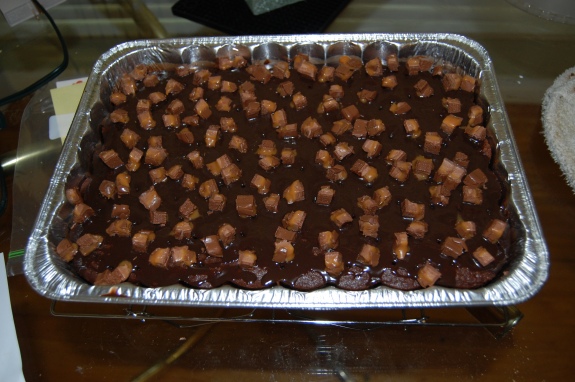 The recipe called for 13 oz. of chopped Snickers--that seemed a bit high to me so I went with only 4 oz. of chopped Milky Ways. I think that was sufficient--even for the most devoted chocoholic.

Next, you were supposed to take 1/2 cup of canned frosting (ick) and heat that in the microwave and pour it over the chopped candy bars/poke cake. I'm definitely not a fan of canned frosting. I had some ready-made chocolate marshmallow frosting in the freezer. I think this is the 3-4th recipe I've been able to use this batch of frosting. Good deal! I like that cost effective frosting! I warmed it in the microwave and drizzled it over the cake/chopped candy bars. 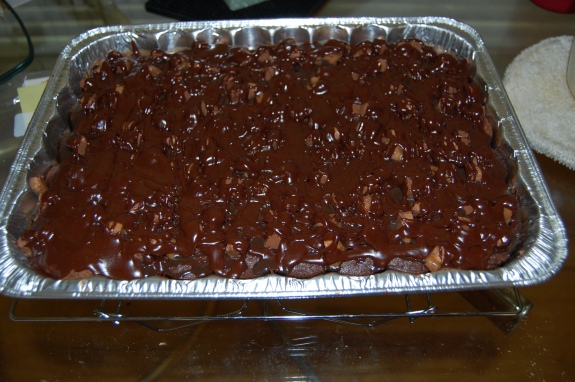 That was the end of the recipe but we know I always have to take things one notch up so I took the remaining 2 tablespoons of the cream cheese frosting (it's been a good batch for 2-3 recipes as well) and warmed it enough to dribble it over the top to pretty it up a little and give a little tang to all that sweet. Hopefully it won't be over the top for them. We'll see! 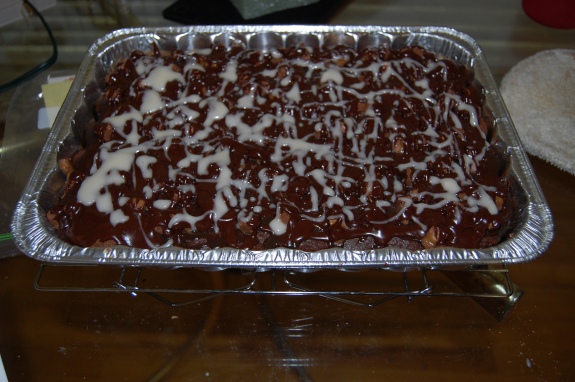 I wish that I was a librarian right now.

Amen Spike! I concluded long ago that in a perfect world I would be LGrant's neighbor ;-)

Have fun at the library LGrant- let me know what books you pick!

I don't pick them at the library--online. LOL I had a nice time talking to my librarians. It was CHAOS there. They had some Friends of the Library event going on. It was packed with people and sounded like a playground. The kids were having fun. I got some free DVD from a woman with a big stack of them. Not sure what that is yet. I think there is a World of Robert Jordan book, a baking book of some type and an audio book (I forget the name) and a few DVDs to watch. I'm too hot to remember. LOL The librarians were excited and all seemed to agree they would need a lot of chocolate and sugar to survive the rest of the day. I also found out they have refrigeration so I plan on making them one of my famous berry trifles while the berries are still around. They said they wouldn't need refrigeration--they would eat it all so fast. LOL They are lovely people.

Two of the Lions from Between the Lions, the eight-time Emmy Award winning children’s television series and the recipient of a 2009 Parents’ Choice Award will visit the Library on July 16 and offer two programs at 1:30 p.m. and 3:30 p.m. This will be a live puppet show with a loveable group of supporting characters which will include storybook readings, songs, jokes and audience participation. Bring your camera to have your photo taken with Cleo and Lionel. Thanks to the Friends of the Library, face painting, popcorn and lemonade will be available from 12:30 p.m. and 3:30 p.m. outside the Library. Also, Wanda Hartfield will be playing a harmonium, a free-standing keyboard instrument similar to a reed organ. The sound is produced by air, supplied by foot-operated or hand-operated bellows, being blown through sets of free reeds, resulting in a sound similar to that of an accordion.

DVD is stories and songs from Between the Lions. Are they related to you, Lionheart? I think the audio book is People of the Book or something like that.

again, wish i worked at the library, it would be SWEET, ha ha.

LGrant - Between the Lions is an awesome PBS show that actually has it's roots here in Jackson, Mississippi for PBS. The show is a co-production between WGBH in Boston and Sirius Thinking, Ltd., in New York City, in association with Mississippi Public Broadcasting. Isn't that cool? Connections all over. It's a small small world.

Amazing. I guess I will have to listen to the DVD and see what the songs and stories are all about but I'd better find some little kid who will enjoy it more. Thanks for the info!! I'm sure the kids had a blast yesterday. They were all SO excited when I got there. It was crazy. My librarians looked a little frazzled but appreciating all the turnout and enthusiasm. I think they were happy I showed up with reinforcements in the form of food. LOL

Ah- yes Lions related to Lionheart- nah my moniker is because as a kid in school playing sports a play on my maiden name Lenhardt was "lionheart" and that became my nickname.

Furthering free association- The first movie I saw with my high school boyfriend (who's now my hubby!) was called "The Ghost and the Darkness" and is about two lions. It's loosely based on the Tsavo lions that wrecked havoc on a building project and ate like 135 workers over a couple months. http://en.wikipedia.org/wiki/The_Ghost_and_the_Darkness

I don't know what that movie has to do with anything, it must be Friday!

L Grant tell us how many Paula Dean recipes do you use. I know that you must use some with your North Carolina back ground, you could should use at one or more on occasion. L Grant is second only to Paula Dean, and she would be first, if she out of the God Forsaken Woods of Oregon. I still wonder what L G finds to make stay, except her husband. L Grant, I had a local delicacy today for lunch, it is called a fresh Tomato Sandwich. Ingredients are:
2 pieces of fresh White (Light) Bread, a Whole ripe tomato sandwich about the size of a baseball. Salt and Pepper to taste along with Dukes Mayonnaise.

I remember Duke's mayonnaise, Bean. Good stuff. I used to like their pickle relish too. For some odd reason my favorite thing was Pringle's chips and that relish. The tomato sandwich sounds delicious!

I use a few of Paula's recipes. I haven't found one I didn't like that I made but some of hers are even too much for me. Like the Krispie Kreme Bread Pudding with donut pieces and sweetened condensed milk poured over that and I forget what else but I feel you might as well go get the sugar bowl and just eat that. It's nothing BUT sugar and even my die-hard dessert eaters don't think they would like that much of a sweet thing. I haven't watched her show in over a year nor picked up any new recipes. I really don't like FoodTV any more. It is too commercial and all about "performance" rather than a good cooking show. There are still some good ones (Alton Brown, Ina Garten (Barefoot Contessa) but I don't have the patience to watch all those other shows to find the good ones. I used to keep my TV on that channel nearly all day. Now, I could care less to watch it. And don't get me started on their website. Used to be a great place to go for recipes. Now it has so much junk on the site to download to look at every page that I give up after 2 pages and 20 mins. of dragging around. So, I guess I make less and less of Paula's recipes since I quit watching her show.

The rest of the stuff about Oregon and NC--I'll just leave uncommented on. :) I'm happy where I am and you are where you are and that's enough to say about it.

Linda, I agree totally with you about the Food Network. I used to watch it a lot but not so anymore, just Barefoot Contessa and the Next Food Network Star. Their website used to be so user-friendly. It was so easy to find a recipe that you had seen on a show. Not so anymore.

I made your toffee chip bars this weekend. SOOOOO good!

Getting back to the Library --- I'm reading a great book right now called: The Guernsey Literary and Potato Peel Pie Society. And Lionheart - I used to live next door to Linda and yes -- it was great! Although, I have to say that she didn't take up the "serious" baking until she left Minnesota.

Carol, I just started that book too. So far I really like it!

I think I have that one on my reserve list. Carol forgets to mention I used to take out the middle row of anything I baked for Portland and bring it over to her house for her and Dick so they wouldn't feel left out. Portland never missed the middle row. :)

And it was great living next door to Carol--particularly during 3 AM meteor showers.

LGrant   Wednesday, August 12, 2009
LGrant and ! do you ever go to recipezaar.com?
And have you ever made or eaten tomato pie??
A local restaurant is making it and selling it and it is
so very good!!! Yum!

I have used recipezaar several times. I even have an almond joy cheesecake posted on the site and it has received good reviews from other bakers. If I remember, my name is OR Baker. :) I have never eaten tomato pie but I have heard of it. Ever heard of cake being made with tomato soup? It sounds very weird but is actually good. Usually a spice cake recipe. I'll check out tomato pie recipes. Thanks for the tip!!