We all feel the desire to eat out occasionally. For convenience. For socialization. For someone else to do the cooking.

I was out doing my errands for a Saturday. Still novel to do that and spend hours running around and enjoying it since the long hiatus due to surgery. It was close to my lunchtime and I yearned for someone else to do the cooking. I quickly crossed any standard fast food options off my list. I am trying to eat better. Though fries and a fried fish sandwich is appealing--it isn't very nutritious or healthy. Scanning the options around me, I spied a new place - Bambuza Vietnam Grill. It spoke to me.

Being a vegetarian (or officially a pescatarian since I eat fish) is a challenge at most fast food establishments. Nearly all have a fish sandwich but any salad offerings other than a side salad come with meat. Wendy's is the worse--no fish options (other than Lent). Other than a side salad and fries or a baked potato, you have few options. I've learned that any place advertising Vietnamese cuisine has a lot more options. So, I went by and checked them out. Though their menu isn't extensive, it has some great offerings. One of them was Vegetarian Pho. I've heard Merrick talk about Pho for years. Now that she is a vegetarian as well she has a hard time finding vegetarian pho and occasionally yearns for the one made with beef stock simply because she loves pho so much. I was excited to see it on the menu and see what it is all about.

Though I love spring rolls that are made with rice paper rolls, I truly love the crispy fried ones best. I love the contrast between crispy outside to soft veggie inside. It isn't always easy to find a vegetarian version but usually you can find them in Thai or Vietnamese restaurants (or Asian ones that cater to various ethnic cuisine). Bambuza had a vegetarian version so I had to have some. I had to wait a few minutes and browsed their menu and enjoyed the ambiance too. I was even offered some iced water while I waited. I don't think I've ever been offered a drink while waiting for take-out before but I gratefully took him up on the offer. I perpetually forget to have a bottle of water in the car and was quite dry. I did chat briefly with the proprietor and discovered they opened only 3 mos. ago. I hope they have great success and will stay around.

I brought my food home and pulled out all the pieces--there were a few. Since I've never eaten pho before--I wasn't sure about the assembly and what went with what. 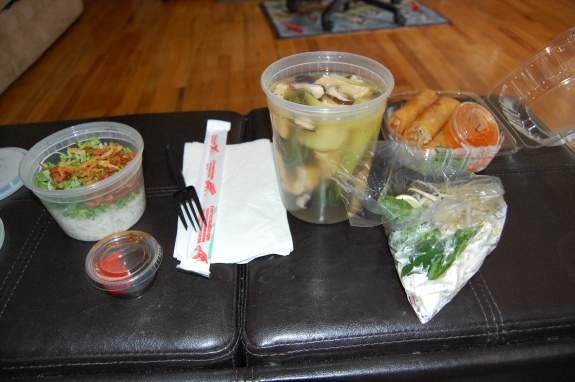 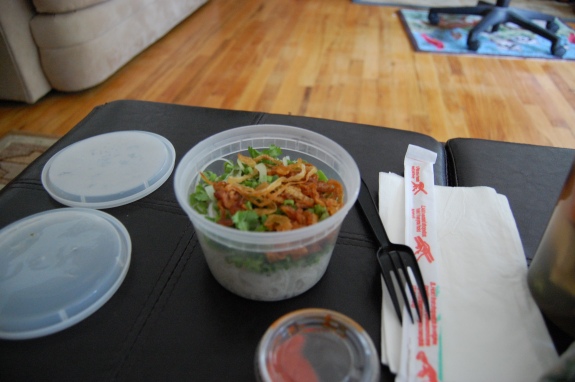 and ladle some soup and veggies on top of that. Hope I didn't break any pho laws. It was quite tasty that way. The soup broke up the noodles and the other items flavored the soup a bit more. The soup is full of good veggies and lightly seasoned--must be very low sodium. I was tempted to add a little salt but left things as they were. I was also given a little bag of bean sprouts, a cut lime and some cut jalapenos. 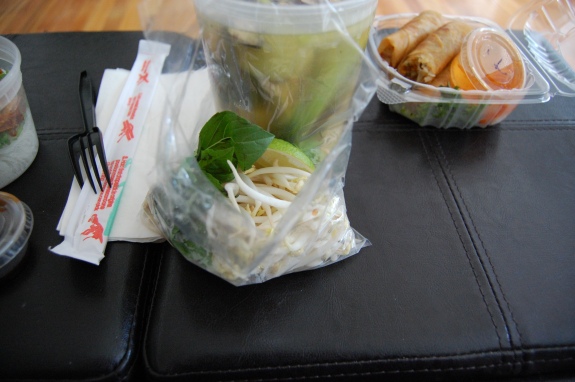 Again--do these go into the soup or on top or what? I opted out with the peppers but added some sprouts and (I think) some basil to the soup. Having these separate left them nicely crunchy and tasty. 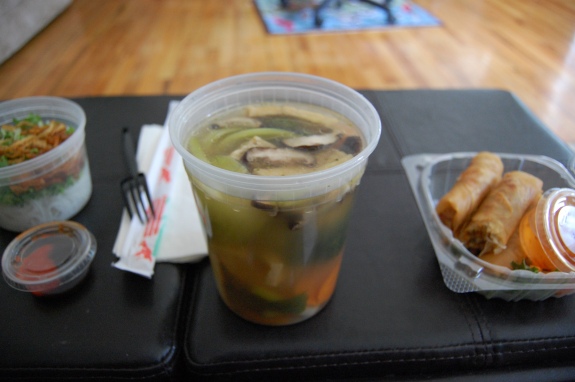 The vegetarian egg rolls were perfect--again very little salt added so they were not overly seasoned and all the veggies were lightly cooked and tasty. Some pickled carrot and jicama sticks were added to the dish making it tasty and more nutritious. 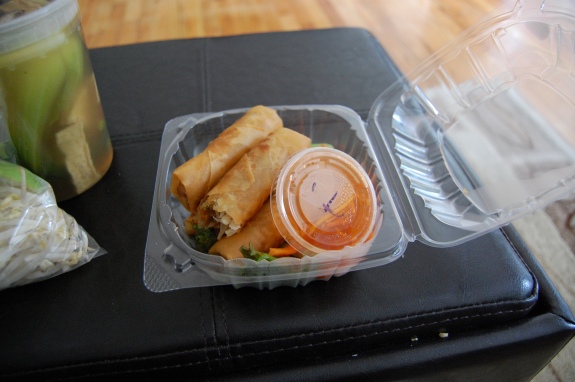 With the fried egg rolls it wasn't the MOST healthy lunch but I think the rest of the meal balanced that out with a lot of veggies in the pho and on the side. I have to give it a thumbs-up for an excellent lunch. I'll definitely go back and I will talk up their grill when given the chance. A little pricier than McDonald's or Taco Bell but infinitely healthier eats and (for me) a more satisfying meal.

Nice blog! We too have been searching for healthier fast food. It's quite an oxymoron in our society, unfortunately. The food you got looks great! We'll have to look for some Pho options in our area as well.

Also, I don't think I've ever seen a photo of your place. Looks quite nice with the hardwoods and a glimpse of the couch/ottoman. Cozy indeed!

I hope you can find one as healthy and fresh as this place. It seemed to be a cross between fast food and a restaurant. Nothing was pre-made. They made it all fresh while I waited. Everything is minimally cooked so it has optimum flavor but not from tons of salt or heavy on spice. Very light and bright and fresh. Very impressed with the place.

I'm not much of a decorator so I rarely take photos of the place. I do love the wood floors and the huge windows in the living room that give so much natural light and outside enjoyment. Other than privacy I'd love a house more glass than walls for all the light and natural world to enjoy.

That looks so good! I wish there was something like that around here.

We have a place called Lang Van here. And now I am craving it big time!
I love the fresh herbs in Pho. Yum Yum Yum!

ah! Pho! I've been meaning to try it as well, there's a place I drive past with my husband (who is a big pho fan) named Photastic. I've always called it "foe-tastic" in my head, just this weekend my husband said, for the nteenth time, we should eat at Fa-tastics. Thats when I learned that pho is pronounced like "Fa" in the Do-Re-Me song. You've inspired me, we're going to try some pho for dinner this week :-)

Favorite "fast food" that you can fix at home: keep a big bag of broccoli and a big bag of shredded cheese in the fridge. Nuke a plate of broccoli for about 4 minutes (more if you like them less al dente), sprinkle with cheese and yum!

I tend to like veggies less cooked. One of the reasons I like Asian. Even in soups like Pho the broccoli is very soft but doesn't taste overcooked to me. Must be the stir-fry or something that allows it to be cooked but not too cooked and it doesn't taste as cooked as steamed to me. Steamed nearly makes it where I don't like it. I've very weird with the cabbage family. I like them raw better than cooked. So, the less cooked, the better. Try it! I really enjoyed it. Merrick and I talked about it today. I was so proud to tell her I found vegetarian pho less than 3 mi. from my house. Can't wait to go back!!